The Square Peg - Road Construction - or "There's a hole in my pavement, dear Liza..." 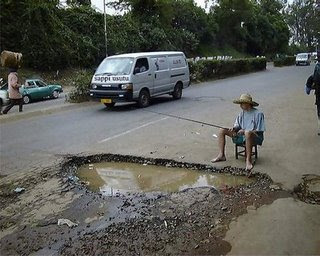 It's not like traffic is bad enough in good old San Antonio, they have to go and put up cones, divert traffic and generally make a mess of things here. I'm talking road construction. Road construction (reconstruction is probably a better word) never really stops here. It possibly never stops anywhere. I think it is an evil plan, myself... sort of like built in obsolescence in other products. Roads that were rebuilt just two years ago are pockmarked with potholes big enough to bury a Beemer. Residential roads are rutted with dually marks, and it isn't from Billy Bob's F-350. Nope... it's from all the heavy equipment and sand and gravel semis trucking down your local lane. Why? Road rebuilding. It's a racket, I tell you.

And can anyone explain to me why it takes two years to repave four miles of two lane road? That's a bit excessive, isn't it? I'd give them that two years if they didn't have to turn around and rebuild that road they built two years later. I recall when I was a kid in Denver they repaved a major one-way three lane thoroughfare from downtown to the city limits. It took them all of three months.They did most of the work at night and never had more than one lane closed during the day. Oh, you might have had to drive on gravel for a couple of blocks, but generally it was smoother than most streets down here. Of course, if you raise too many objections, your rumblerama road slips further back on the priority list and you wind up with a crumbling surface dotted with slap-happy asphalt patches for the next four years while they reconsider whether or not to reconsider paving your little stretch. It's nuts.

Take 281... it's a U.S. highway for crying out loud. Can anyone tell me why they end the six lane freeway just beyond that new cloverleaf interchange they built at its intersection of the outer loop? I can guess. San Antonians said a big "NO" to a toll road. After all, what commuter would like to pay $8.00 a day to go to and from work? So what did they do? They made the northern stretch of 281 into a "Super Street." Super my hiney. There are traffic lights about every four blocks through the business area and no frontage roads like they have everywhere else. And the lights are synched... so you hit every red light on your way out of or into town. That's efficient. Instead of widening that road, they should have installed frontage roads and put the lights on those. Bob the Builder could have figured that one out. Geez.

At a cost of around $30 million, the Super Street supporters tout that it will pay for itself in a year. May I be the first to cry, "Bullsh^t!" Less than a year in operation, they already had the handy-dandy fix it crews out putting up cones and slowing traffic even further because things were breaking down. The Romans built better roads... by hand! And they did it faster. And they're still in use today. And they only needed one supervisor. Now, you have at least three supervisors for every worker. Tell me road building in America isn't a racket.

There's a way around it... I've seen it on the Internet. Flying cars. Heck, baby boomers were promised those by the nineties. Now, they have some really innovative ones. I'm looking at Terrafugia's TF-XTM. I like it because you can pilot it or it can fly itself, and let's face it, that's not only really cool, it's probably a lot safer than turning everybody loose with one of those suckers. It's still in development and I do have a couple of fallbacks... either the TransitionTM, which isn't nearly as cool, or the Aeromobile flying car, which has some slick lines and you don't have to get out of the driver's seat to deploy the wings. At my age, those things are kind of important. I mean, who wants to stand out in the hot sun or pouring rain while converting your car into a flying machine? And even though it will be a few years, that just gives me time to lobby Congress for approval to put flying cars in every garage. That could bring the price of them down, and believe me, that is a consideration, even though I expect to be Texas rich when I find oil in my front yard. Hey... I can dream, can't I?