The Square Peg - The Coming Apocalypse... or Why Can't I Win That Stupid Trophy?

The Coming Apocalypse... or Why Can't I Win That Stupid Trophy?
Copyright S. Bradley Stoner

I scratched my head and stared at Bob. "The ice cream truck?" I asked, listening to this afternoon's repetitive rendition of "La Cucaracha" wending its way toward us from two blocks away. "That guy needs to find a new tune."

Bob stamped his foot, raising a little puff of dust. It's amazing how quickly things dry out in Texas... shoot we just set a record for spring rainfall. "Don't be ree-dunk-you-less," Bob shot back (he uses that word when he's peevish). "You know what I'm talking about... the APOCALYPSE."

"Geez, Bob, last week it was Armageddon. The week before it was the Big Collapse."

Here's the problem I have with Bob's preparations. Well, there are lots of problems with them, but this one sort of stands out. Bob was at my house asking to borrow some gas for his mower. What's that tell you? "That's great, Bob, but how do you plan on getting that go-bag to wherever it is you plan on going? You can't remember to get gas... you're car won't get you two miles."

I suddenly had a vision of Bob borrowing a gallon of gas from each of his neighbors and stashing it in an underground tank so he'd have plenty of gas when the time came. What a cheapskate... not to mention I didn't appreciate being used to facilitate his getaway. "This is the last time I'm loaning you gas, Bob... you owe me about thirty gallons right now."

"Uh... oh, yeah, well I'll get that back to you. Anyway, I have plenty of dried food and about a thousand rounds of ammo to ward off marauders. So I'm good," he mumbled, grabbed the gas can and beat a hasty retreat.

I didn't tell him I was more ready for the apocalypse than he was. I wasn't worried about having lots of modern ammo... I have black powder flintlocks with extra flints. I know how to make my own black powder and cast my own bullets... and I have a medium sized keg of old wheel weights on standby for that purpose. I own swords and knives and all manner of mayhem creating primitive weapons. I can go caveman on the suckers if need be. Which brings me to my current little project I'm working on in my garage. I was busy using a spokeshave on a chunk of oak when Duncan wandered into my workshop.

"What the heck you makin' today?" he asked.

"An atlatl," I responded.

"What in tarnation is an at-lat-al," he pondered. Duncan parses words he doesn't understand. "Looks like a stick to me..." 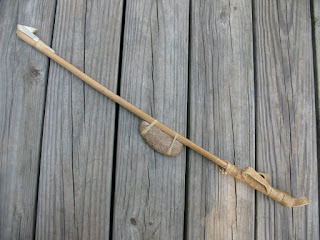 "Well, it sort of is. It's a primitive throwing stick to help propel a long dart at prey. Pretty effective, too," I grinned.

"Why not just use a bow and arrow?"

"They're a lot harder to make," I said. "You can make an atlatl and darts using a flint knife if you have to."

Which brings me to the second part of my tale. My lovely and I used to go to annual atlatl competitions. She won trophies three years running... two second place and one first place trophy... and she doesn't let me forget it. The best I could do was fifth in accuracy and fourth in distance. She does have great form when spear chucking, however, which probably accounts for those wins. 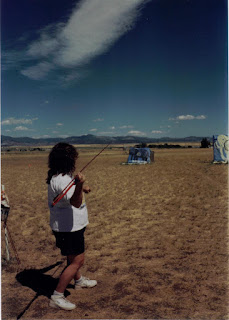 No trophies for me. No matter how much I practiced, somebody was always just a tad better. It was frustrating. It doesn't matter that my targets were at twice the distance of hers... after all, women aren't expected to have the strength that men do. Whenever I get too full of myself and point that out, she just points at her trophies, smiles at me and says, "And your trophies are where?". Geez...

I can still drive a dart with reasonable accuracy, but as I get older, my distance suffers a bit. I'm starting to understand why old cavemen got left behind, and that just sucks. Dart chucking is just one area where older and wiser does not make up for youth and enthusiasm... not to mention strength. This is why I have a backup plan that involves black powder and lead. At least I can keep ahead of the game that way... until my eyes give out. Then I'm toast. But back to atlatls... and for those intrepid four individuals who took my poll, at least now you know what an atlatl is... and it isn't a wooly mammoth... that's just the target. There may be one saving grace for an aging caveman, and that is skill in manufacture.

I think I'm going to make one of those fancy atlatls... the ones with the double dart rests on it and the fancy nock point. It might not get me more distance, but it should improve my accuracy. Besides, if I do some careful wood carving, inlay it with walrus ivory, and use primo sinew, I stand a chance of winning a trophy for best craftsmanship. Maybe. In any case, I will be able to go caveman on any marauders or zombies that think they can take advantage of me... as long as they get in range and close enough for me to see them clearly. I wonder if there's a trophy for zapping a zombie?