The Square Peg – Shut Up and Leave Me Alone!


The Square Peg – Shut Up and Leave Me Alone!
© S. Bradley Stoner 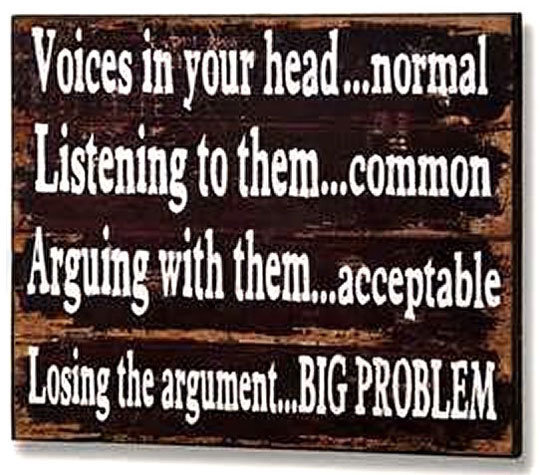 “I’m thinking,” I replied to one of my inner voices.

“No, you’re not… you’re playing Mahjong.”

“It helps me think.”

“No, I’m THINKING. This helps me think.”

“There’s no need to shout, for Pete’s sake. It’s not like we can’t hear you,” rejoined a third. “Look, you need to get back to work on the space infrastructure book… you haven’t done anything on that in a week.”

“No,” interjected the first, “you need to wrap up the novel. You’ve been working on that for years. It’s about time you finished it.”

“Better finish editing that romance,” said the second. “At least that will earn you a little money.”

“If he finished the novel, that could earn him a pile of money,” protested the first.

“Oh posh!” cried the third. “Your co-author just told you The Case for Pandora is starting to sell… finish the next one! You know they will make money!”

“Peanuts,” the second said sourly. “Besides, no guarantees on either of the other two. The romance editing job is a lock.”

“Geez, guys, give it a rest, will you? I’ve been pounding the keyboard for years. I need a little time to myself.”

“Yeah,” added the third, “why do you want to take time off… it’s not like you’re getting any younger.”

“Exactly,” the first intoned solemnly, “you could shuffle off this mortal coil tomorrow… leaving everything unfinished.”

“Shakespeare?? You’re going to quote Shakespeare to me? Seriously?”

“Hey, you can’t argue with the Bard, pard… the man will live forever… and you could too, if you’d just get busy.”

“Bard, schmard,” snorted the third. “That’s the past… the future is in space travel. I mean, you just have to look at where Musk, Branson, and Bigelow are going. Finish the infrastructure book and help them get there.”

“Somehow, I don’t think they need my help. They seem to have a pretty good handle on things.”

“Now you’re just being self-deprecating… knock that crap off! You and your partner have some bold ideas… it’s time to boldly go…”

“Don’t you dare quote Star Trek to me!”

“Crimeny!” shouted the first, “you know as well as I do, that science crap doesn’t sell worth a damn! Adventure, excitement… that’s what the public wants. Finish the damn novel!”

“Oh, come on!” blurted the second. “Just look at the statistics… romance outsells both of those lame genres...”

This was going to drive me around the bend. I mouse-clicked on the little speaker symbol on Mahjong and let the monotonous music flow, trying to drown out the voices in my head.

“What the hell are you doing?!” all three chorused.

“I’M THINKING DAMMIT! SHUT UP AND LEAVE ME ALONE!”
Posted by S. Bradley Stoner at 9:30 AM No comments:

The Square Peg – Not Everything Ages Well


The Square Peg – Not Everything Ages Well
© S. Bradley Stoner

Okay, so we all know some things get better with age… you know, like fine wine. Of course, some care must be taken, like watching the temperature, storing and turning the bottles properly, things like that. Other things, not so much.

Take people, for instance. I’m of the opinion that none of us age well. Matter of fact, most of us aren’t really thrilled with age once we get past, say, thirty. Thirty’s a good age. You’ve lived long enough to gain experience and, hopefully, know how to make good decisions by then. Your body is usually in pretty good shape. You have laugh lines, but no wrinkles. Your hair hasn’t turned gray, unless you decided to dye it (apparently that’s the latest fashion for young women… I don’t think it will last long). Finally, you’ve likely found the formula to making a decent living and if you’re not there yet, you soon will be.

On top of all that, you are still young enough to look for adventure, but smart enough to not do anything really stupid. It’s a great time to travel… after all you won’t get short of breath, wobbly legged, or dizzy when you climb to the top of some pyramid or mountain. Don’t wait until you “…can afford it,” like your parents cautioned. Just look around at those who did and you’ll understand why.

Oh, and don’t count on all those diet and skin care regimens touted by Hollywood models. First off, they have the money for personal trainers. Second, they have great genetics. That goes a long way to keeping you looking younger than you really are, not to mention they can afford botox and plastic surgery. More than likely, you don’t. Trust me… eventually things are going to sag no matter what you do. As my mother used to say, “it’s the shifting sands of time.” It’s mother nature’s way of telling you things are winding down.

Back to my premise. As I said, not everything ages well. Take my New Year’s celebration for example. I planned it carefully. I was going to watch some football, have a nice dinner with my wife, and then watch the countdown on TV. I’d have gone to the celebration downtown, but, damn, it was cold out. Doesn’t matter that it was also San Antonio’s three hundredth birthday… yep, tricentennial! The crowd was enough to keep me away even without the weather. I digress.

Just prior to midnight, we opened the cupboard and took out a bottle of O’Mara’s Irish Crème. Now, those of you who follow this blog, know that I don’t drink much, but, hey, this was a special occasion. I was looking forward to an Irish coffee… hadn’t had one in years, and sometimes they just taste good.

Salivating with anticipation, I broke the seal and opened the bottle. In my mind’s eye, I could see the creamy liquid flowing out of the bottle and into my coffee. Carefully, I tipped the bottle… and nothing happened. What? I looked down the neck. The Irish Crème wasn’t creamy at all. It had petrified. Yep… it was a solid chunk inside that bottle. Apparently, you can’t store a bottle of O’Mara’s for five years.
Like I said, somethings just don’t age well.
Posted by S. Bradley Stoner at 8:38 AM No comments: