The Square Peg – Friday the… EEEEEK!!!

Aaaah! Friday once again… it’s arrived. Friday is the start of our weekend. Sunday it’s back to work for both of us. But, today it’s Friday and it’s gorgeous out. Blue skies, sunshine, mid-70s… yep another beautiful Texas day. I went to fetch the mail. Patti Peeksalot was there and I almost turned around, but I’m not about to be intimidated by a five-foot nothin’ skinny mop of hair with a big mouth. How’s that for a visual? Okay, maybe I exaggerated just a little, but to be totally honest I just don’t like gossips. Still, I’m a gentleman.

“Good morning, Patti. How are you this fine day?” I said as I walked up to the bank of mailboxes, key in hand.

Patti eyed me suspiciously. She doesn’t trust me to be anything but sarcastic, which in her case has a lot of validity. “I’m okay,” she responded cautiously.

“Terrific,” I said, hoping that would end the encounter. Wrong.

“You know what today is?” she asked conspiratorially.

“I mean the date,” she whispered.

“I don’t pay a lot of attention to the calendar,” I replied. “I’m retired. I have pop ups on my Outlook to remind me of important things like when it’s time to pay a bill.”

“Don’t you know what that means?”

“Sure. Yesterday was the twelfth and tomorrow is the fourteenth.”

“You’re messing with me again.”

“Well, they certainly did for the Templars,” I noted.

“That’s where this all began. Pope Clement declared the Knights Templar enemies of the faith after being pressured by Phillip the Fourth of France, who was deeply in debt to them. On Friday the thirteenth in 1307 Phillip ordered all of them arrested. Most were killed on the spot and the rest were tortured and burned at the stake… only few escaped according to legend.”

“Spend a little more time with the History Channel and a little less with the soaps,” I advised.

“Ah, there you are! I thought a kinder, gentler you had replaced the old sarcastic you. Guess I was wrong.”

“That wasn’t sarcasm… it was advice, not that I’d expect you to take it.”

“That was sarcasm,” she replied, poking her finger in the air at me.”

I nodded. “Yep, that was sarcasm… and thank you for noticing.”

Patti just scowled at me.

“Well, I’d better head home. Watch out for black cats, ladders, mirrors, and cracks in the sidewalks,” I called as I made a hasty retreat. I could feel the glare on my back.

I’m pretty sure Patti is going to go home, call up her friends, get out her kettle and brew up some special curses for me. On the other hand, I might just find myself blessed with a passel of new rumors. I think I’ll just confirm them this time… that’ll scare the crap out of ‘em. Well, heck, it is almost Halloween, isn’t it?
Posted by S. Bradley Stoner at 12:31 PM No comments: 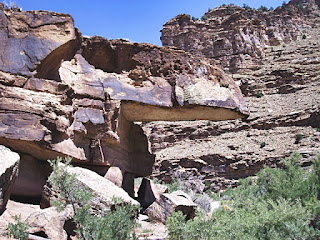 So, this morning I saw a snippet on “Surprise Vacations.” It seems that some travel agencies are offering package deals that require no planning on your part and send you a travel package right before you take your vacation based on your answers to a set of questions… surprise!

I don’t know about you, but we rarely plan our vacations. Sometimes we have a general direction in mind, but generally we wet a finger, see which way the wind is blowing, and take off. If the wind changes enroute to wherever, we’ve been known to change with it… a lot. Just a couple of examples… we once headed for Great Falls, MT from Helena to do a little fishing along the way and wound up at the zoo in Calgary, Alberta. Another time, I came home from work early one Friday, found my sweetie packed and ready to go for a long weekend. “Where to?” I asked. “Just drive,” she answered. We wound up in Seattle around two thirty the next morning and were on the beach at Ocean City before the sun came up. We managed to get a hotel (it wasn’t the busy season) later in the morning on Saturday, spent the day touring the harbor and little museums, got a good night’s sleep, and went to Mount Saint Helens, then on to Portland Oregon and were back home on Sunday night. Now that’s what I call a surprise vacation!

In my high school and college years, kids used to go on road trips. Yep, grab a couple of buddies, pack up the car and head out. It could be anywhere… as long as it wasn’t home. And it could last anywhere from three days to three weeks, depending on who had to be back when. Road trips provided us with the “adventure” young folks today seem unable to find on their own. Somebody has to plan it for them… and surprise them.

We’d have been horrified at such a prospect… it takes away independence. You, know the opportunity to change directions in midstream so to speak. And change we did, as long as gas money held out. Hotels? Forget about it. We took tents and sleeping bags. There was usually someplace to camp… a state or national park, national forest… someplace. And if not, well, we’d sack out in the car at a rest stop or some side road wide spot. Back then we had cars that was more than a sardine can with a GPS. Like we knew what a GPS was… we went on dead-reckoning with an occasional peek at one of those archaic things called a map. Those of us old enough to remember, you could pick those fold up, poster-sized pieces of paper with the web of highways and roads on it for the particular state you were in at any gas station. And guess what? They were free!

You didn’t have to pump your own gas at those stations either. An “attendant” attended to your needs. He checked your oil, your tire pressure, and washed all your windows… for free! Gas stations back then were filled with things like oil cans, oil filters, headlights, spark plugs, points (like kids today even know what they are), fan belts, and other assorted automotive products. You could buy an air freshener (and believe me, after a few days in a car with your two best buddies, you needed one), and a pop… usually in an eight-ounce returnable bottle… or a stale candy bar from a vending machine.
Kids today will never know such joys. Oh sure, they get to stop at pump-your-own-gas stations with convenience stores filled with all kinds of impulse-buying goodies. But they’ll never have a smiling attendant take care of your car while you grab your map and figure out which old candy bar you want to pull the knob for and hear that satisfying whoosh-thump as it drops into the tray of the vending machine. You know what else none of us will ever experience again? Gas that cost less than thirty cents a gallon. Those days, along with your friendly service station attendant, are long gone. No wonder you see so many sour-faced folks at today’s super-mart fuel stops. But I digress.\

Oh, we had “surprise vacations” way back when… only they were usually planned by the government to some exotic place you really didn’t want to visit, usually preceded by sixteen weeks of intensive preparation for the surprises waiting for you when you got to that exotic place. Surprise! I don’t recommend those kinds of surprise vacations.

These new surprise package vacations include air fare, hotel, and what not. I’m not sure what “what-not” is, but it’s in there. Some of the packages are for only a weekend. By air? You gotta be kidding me. When I was working, I flew… a lot. Matter of fact the standing joke was my second home was a Boeing 737. Flying was no joke. You had to get to the airport two hours before your flight so you could check in and clear security. To save ten minutes, I routinely got e-tickets, and printed them out at the airport before I got in line with my laptop over my shoulder, pulling a carry-on, and holding my shoes. Flying commercial air was not an adventure, it was a giant pain in the butt. Okay, if you don’t fly routinely, it might be an adventure.

So, come on, kids. Don’t shell out for somebody sitting at a desk planning a surprise package for you. Get off your rear end, pack a few things, get in your buggy, and go. You don’t need to make hotel reservations because, no matter what you’ve been told, there are plenty of hotels with vacancies out there. If you’re smart, you can get some good rates too, unless you just must stay at a high-end, full-service hotel. In that case, you’ll be screwed on cost. By the way, did you know that “full service” means no “freebies?” No free wi-fi, no free breakfast… nothing is free at a full-service hotel. It all costs. It’s why I avoid them. It’s not that I’m cheap… I prefer to say frugal… but I like getting up to a hot breakfast that doesn’t cost me anything, and I like that free wi-fi.

Oh, and one final thing… get off the frickin’ Interstates, at least once in a while. Get on the back roads of America. This is an amazing country and if you stay on the super highways, you’re missing a lot. You’d be surprised what little gems you can find traveling America’s back roads. It’s an adventure!
Posted by S. Bradley Stoner at 4:53 AM No comments: