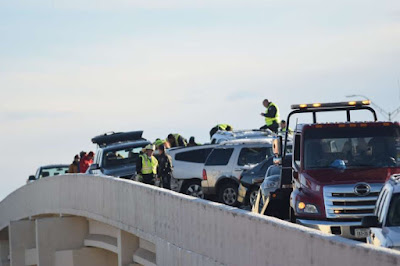 As I am sure most of you have heard, South Texas had an apocalyptic winter storm (a snocalypse?) Thursday night. Oh, okay, maybe apocalyptic is too strong a word, but we are living in a world of gross exaggeration now, aren’t we? Just try to watch the news and tell me we’re not! Like a Tweet is going to alter the course of human events. C’mon man!

No, I’m not going to go off on some freakishly political tangent. I’ll stick to snow, especially since it stuck to the ground here in San Antonio. It was a bit of a surprise. The day started out with rain and drizzle… all day long. The day before we got an inch of rain. I’m not complaining, we needed it. Along about six in the evening, the temperature took a nose-dive. Okay, it dropped by about nine degrees. At six thirty the white stuff started floating down from the clouds. It dropped almost two inches on San Antone and up to four in the Hill Country to the north and west. Heck, Corpus Christie got four inches. The predictions had it limited to the western Hill Country, but I’ve long since learned that our forecasters would make better hind-casters.

It was great to start with… kids of all ages were able to make real snowmen. Of course, Texas has to be different. There were snow cowboys, replete with boots and hats and a couple of sombreroed vaqueros, along with the standard carrot-nosed Frosty-types out there. It looked downright Christmassy… and it sort of got everyone into the holiday spirit, which is sometimes a bit hard in south Texas. Bingo Bob was beside himself. By the time he finished his snowman, there wasn’t a trace of snow left on his lawn. Duncan used up all his snow lobbing snowballs at Bob, which elicited some interesting New Jersey-isms from old Bob.

Then it got cold enough to freeze… and freeze it did. That drove all us hardy Texans inside to warm up. I expect the stores to do a brisk business in winter coats that will get worn about once every seven to ten years down here. The last snow we got was some was a half inch in February 2011, and that was gone by noon. The biggest snow that fell on the city in recent history was 13.5 inches in 1985. I wasn’t here then, I was in Montana where we got up to five feet in a single storm, so I wouldn’t have been impressed in any case.

This cold snap, however, made me dig out my long pants. That was annoying. I enjoy the freedom of shorts in the winter. Come to think of it, I enjoy them year-round. The only good thing I can say about cold weather in Texas is that a warm bed is mighty inviting… it invites you to sleep in a little longer, and I did. I didn’t get up until 7:30 and I’m usually up around 4:40. I watched the morning news for a while. It’s entertainment on days like this.

Yep… when the roads get icy, Texans get stupid. We get to watch the Texas Ice Follies, and it doesn’t cost a dime. Texans are so used to clear dry roads, they forget all about safe following distances, frictionless braking, and loss of steering. It’s bumper cars for grownups! It’s a gas to watch unless someone gets hurt.

Today it wasn’t so bad. Only the elevated highway sections got icy. You’d think people would accommodate such a condition, especially when they are warned about the road conditions. They don’t. We had a number of minor accidents from four-wheeled ice skating, but then some idjits decided to try it on the downhill side of an icy ramp. Know what you get then? You get an 18-car ramp clog, that’s what you get. As near as I could tell from the aerial view, the lead car lost control, bounced off the cement side rails, spun sideways, and came to rest against the rail perpendicular to traffic. From then on it was wham, bam, slam and jam. Eighteen cars all squished together, and right in the middle, facing backwards, a little compact unit that was decidedly more compact than when it came off the assembly line.

The highway department closed the ramp… just a tad late. With all the beaches nearby, you’d think they could put down a little sand before morning rush hour, not that it would help a lot. Texans would find a way to slide on that. It’s easy when you’re doing 75 in a 40-mph zone… especially if you have to hit your brakes.

I tore my attention from the boob tube and looked outside. The snow was starting to melt, but the temperature was still hovering around 32. I don’t have to take this crap, I thought to myself, I’m retired. Besides that memory foam bed looked awfully good. See y’all when it warms up.

Posted by S. Bradley Stoner at 6:48 PM No comments: