The Square Peg - Fangirling Blogging Award Nomination?... Why? And where can I hunt down the dirty rotten....

Fangirling Blogging Award Nomination?... Why? And where can I hunt down the dirty rotten....
S. Bradley Stoner 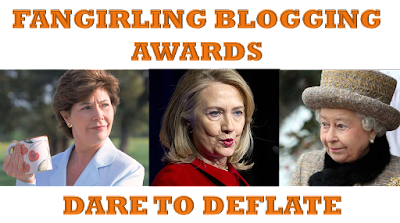 I'm not even going to copyright this... because I have no freaking idea what a blogging award is, far less what Fangirling is. In fact, I think I'll delegate the response my minions because whatever it is, it's probably illegal in Texas and there are a thousand guys lined up to shoot at that target. But wait... I'd better read the rules... okay.. minions can handle this... nothing in the rules precludes delegation.

1. Read Award Post - Okay Duncan Donutz did that, and he reports back that the author(ess) has completely bollixed up the American language and ought to be arrested for "Assault with a deadly writing implement." I think that carries five years in the pokey (that's gaol for you British types). I told him it would involve extradition, to which he replied, "Well forget it then... too damn much paperwork."

2. Thank nominator - I assigned this one to Bingo Bob... it's about all the intellectual activity he can handle... and the way he spelled Adele's name... well, let's just said he should probably be shot, but Archer's arrow probably won't fly that far. Suffice it to say that his "Thank you," was about the most backhanded groveling gratuity I've ever seen.

3. Answer their book related blog questions - I might have to handle part of this myself... two of my minions reported back with the comment, "What's a book?" and more importantly they complained about all those extraneous "u's" in words. They want to know what's wrong with the writer's spell check... and if it really does cast spells.

4. Invite 3 other cool bloggers - Pete the Pilot wants to know why you would want to choose "cool" bloggers when there are so many "hot ones" out there.

5. The minions have opted to delete numbers 5a - 5c because of its wussy approach to life. Irish Ed says if the wee people don't want to read a blog, "feck 'em." At least that's what I heard through that thick brogue. And there was something about leprechauns not hiding at the end of every story. I'm still not sure what that was supposed to mean. Finally, Howard Humbugger said, "If you didn't have sarcasm, you wouldn't have anything... no wonder you don't get many nominations." Shut up Howard.

Now to Adele's questions: First off... what's with the ©? Are these really worth stealing?

1: My least favourite book is ‘Snow Falling on Cedars’. If my bed was a little wonky, I would probably prop it up with that. Which book would you prop your bed up with? I handle this one... My first thought was Fifty Shades of Grey, but then I remembered the last time I picked it up, it burst into flames, so that one is out. Then I thought about Tatterdemon, but that was fascinating in a sick, twisted sort of way... and it was an e-book, so I would be propping my bed up with electrons... Nope... If I had to choose, it would probably be Windows 8 :: Migrating to Windows 8: For computer users without a touch screen, coming from XP, Vista or Windows 7... Like I'm ever going to get rid of XP.

2: You’re only allowed eBooks OR real books for the rest of your life (now, don’t be pretentious), which would you choose? Arthur Ablewriter took this question. He was a bit confused and sent back this response. "eBooks are real books, aren't they? I mean they have copyrights and ISBNs and all the other things necessary to make them real... Or did she mean traditional bound paper books... Ms. Arrowaimer really needs to be more specific." That's "Archer," Arthur... don't be such a prig.

3: ‘Hunger Games’ or ‘Quiddich’, which is the suckiest sport? I gave this one to Sammy Sportsnut who declared, "Please... those aren't real games... and everybody here knows soccer is the suckiest sport to ever hit the planet. Run around, kick a little ball, butt it... yeah that's one butt ugly excuse for a game. At least rugby involves physical contact and blood." You tell 'em, Sam.

4: If your life story was made into a biography, what chapter would you ask them to leave out? I gave this one to my biographer, Edward Edifier, "Are you kidding me?" he said in his email. "What kind of false modesty is the Fangirling award looking for... and how did they find out about the book and movie script?! I just finished the scene on Mac Davis' rendition of that song about you, 'Oh Lord it's hard to be humble...' You can't leave out anything when describing perfection. Tell Ron Howard if he tries to alter the script, he and I are going to have words."


5: Bloggers are renowned for being a peaceful peoples, but which character from which book (other than Bella Swan from Twilight) would you most like to slap? Who made that false claim? Peaceful? I don't think so. Have you read... oh never mind, you probably haven't. Okay, I'll answer this one. It's Dracula... someone needs to slap the shiznick out of that blood sucking pervert.Where the hell is Van Helsing when you need him?

Now I guess I'm tasked with nominating three other unlucky saps for this goofy Fangirling award. They're all of the female persuasion since this award is definitely a feminine one. And curse you, Adele Archer, for implying that I might fit that category!

Nominee number one: Laura Bush... because there are some unanswered questions about Dubya and I think we all deserve to know

Nominee number two: Hillary Clinton... because she's a master at writing fiction... and she does it with a straight face. You taught her well, Bill.

Nominee number three: Queen Elizabeth II... because, well... Inquiring Minds Want to Know. Oh, and you're not allowed to delegate this to Charles... he'd just muck it up.

Now, here are the questions:

1. What is your favorite romance book? Aw, come on... we know you don't curl up with stuff on macro-economics and international law.

2. You're stuck on a bus with Vladamir Putin. Do you pull out Aleksandr Solzhenitsyn's The Gulag Archipelago, Tolstoy's War and Peace or Vladimir Sorokin's Day of the Oprichnik? No fudging... you have to be completely honest.

3. Politics by Aristotle, The Prince by Machiavelli, Why Nations Fail by Daron Acemoglu and James Robinson or Cinderella by the Brothers Grimm? Be honest.

4. What unlovable male lead character would you like to seduce... and why?

5. Al Gore's An Inconvenient Truth or Donald Trump's The Art of the Deal. Yeah... we all know you'll lie about this one.

So there you go... I'd like say, in all humility (although I don't have that affliction) this has totally screwed up my Saturday protocol, thank you very much! I had a really important subject to write about and instead I got roped into this nonsense. Well, what's good for the gander is good for the goose... or gooses as the case may be... so get to work girls, I dare you to take up the challenge!
Posted by S. Bradley Stoner at 1:13 PM