What's in a dream? And should it be pursued?

What's in a dream? And should it be pursued?
Copyright S. Bradley Stoner


I woke up in the middle of the night some two months ago. I won't say it was because of a dream, but there was a dream and it stuck in my head. So what does a writer do when that happens? Yep... he fires up the old Dell, grabs a cup of coffee while the hard drive warms up, and puts what is in his noggin down on virtual paper. So here's my question... is this worth pursuing? Or is the just another of those random mental images that needs to be round filed? Anyway, here is the result of that midnight rambling: 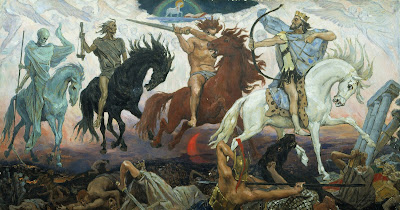 Viktor Vasnetsov, the Four Horsemen of the Apocalypse
-I-
Nightly I am attacked by a plague of dreams.  Dreams that fade in and out like near-spent light bulbs. Some are visions of what once was, others are but illusions of what might be.  Or are they illusions? So many of those illusions seem to have borne fruit of recent. At least more than I would like.

But before we get to that, let me introduce myself. I am Benet (I’m told that means “right hand son”)... “Ben” Gorsachi. I know. Weird last name. Somebody once told me where it came from, but I was young and I no longer remember. It doesn’t matter anyway. What matters is that I am here... still here. I should have been gone so long ago.  And that is my curse.  Agelessness is not a blessing, no matter what you might think. Oh, one has time to learn, to travel, and to experience many, many things. But as time passes, one comes to realize that there are repetitive patterns to life. People are born, they live, and then they are no longer in your life. Technology improves and regresses with the rise and fall of cultures, governments come and go, but the patterns remain. After the first four hundred years it begins to grow tiresome. At a thousand, it is positively boring.

Prescient, they call me, and sometimes a psychic, but I am neither. I am just experienced across the ages. Perhaps that’s why the illusions seem to bear fruit. Here’s the problem. My dreams have diverged from their age old patterns. That is at once exciting and terrifying.

Allow me to back up for it is important that you know from whence I came. I was conceived and born in a small village in the Pyrenees on what is now the border between Spain and France in 1015 anno domini. I’m not sure whether I was a Spaniard or a Frenchman by birth... only that by the time I was a small boy of five or six, my family had left the mountains and trekked to what is now southern France... and Poitevin and eventually French were the only languages I knew until much later. No one ever spoke Spanish in my family, at least not to my knowledge. We settled in a tiny village near the confluence of two rivers around 1020 where some 20 years later Pierre, Viscount de Marsan would found and build his capital, Mont de Marsan in the old Roman province of Aqutania, the Aquitaine. At the time, however, it was little more than a collection of rude buildings inhabited by farmers, woodcutters, and fishermen.

As a child I had my chores, of course, but when not engaged in those I was given free rein to roam about the village and nearby countryside. My father, who hired out as a mercenary soldier, was gone a great deal, often returning home only briefly, during which times he managed to sire two brothers and three sisters for me. Counting my older sister, that made seven of us left in the care of our mother and a spinster aunt.