The Square Peg - The Devil's Out There...

The Devil's Out There...
Copyright S. Bradley Stoner 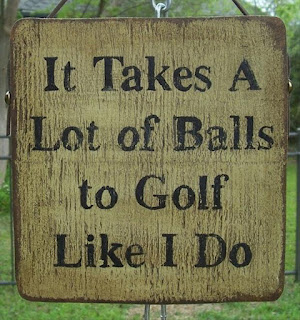 There’s an old adage in the corporate world that the higher your position, the smaller your balls. Get your mind out of the gutter... we’re talking sports here. And we’re not talking ping pong... we’re talking golf. Golfers like to say they play for the camaraderie and relaxation. Don’t you believe it. If the game was ever intended for that purpose, they wouldn’t hire Satan to design the golf courses... and I’m absolutely convinced they do. I’ve played some world-class courses both here in San Antonio and all over the country. Some of them are positively diabolical.

A bit of a back story is in order here. I took up golf out of self defense. Translation: all the intel on upcoming contracts, who was partnering with whom, and entrees into teaming for the really big contracts all took place on the golf course. At least the preliminaries did. I made a lot of friends out on the course... and a few enemies. Not business-wise... golf-wise. More about that in a while. Now back to those Satan inspired course designs.

Most golfers wax rapturous about the beauty of the course. They talk about its challenges and, consequently, the rewards of successfully completing all 18 holes... at or under par. Not me. Some courses aren’t too bad. Mostly they’re on military bases. Aberdeen Proving Grounds has a course that might have been designed by a lesser golf angel. It’s relatively flat, scattered trees, virtually no nasty bramble choked rough in which to lose your ball... or embarrass yourself trying to find it while the rest of your foursome fidgets on the fairway. But there are some, while picturesque, are just torture chambers for the inept hacker, among whom I count myself.

There's a course in Tucson that comes to mind. It starts out fairly benign, but that’s just to sucker you in. Nice straight fairway on hole number one, not too long and fairly open. It’s a par 4 hole. If your drive is true, you can reach the green with your 9 iron on the second shot. At least that’s what everybody said. They could drive the ball 300 yards. My best drive on my best day might make 270. On my worst day, it kind of hits the dirt four feet in front of the tee and sort of dribbles out a couple of yards. Then somebody says, “Take a Mulligan,” so you can embarrass yourself again. I hate that.

That day, however, I was lucky (I don’t dare call it proficient - that isn’t in my golfing vocabulary). I set my ball on the tee, backed off to eyeball the shot, walked confidently up and addressed the ball (“Hello ball!”) and smacked that little sucker right down the middle of the fairway. I thought it was a great shot until the female in our group got up and smacked hers 40 yards beyond mine. Hey... she was younger and she took the game seriously. Clearly she had taken lessons from a pro. One of the guys managed to knock his ball even further, but it gave the group a bad lie. Oh, I didn’t mention we were playing a “scramble,” did I? For you non-golfers, that’s a game where you find the longest and best lie for the shot by one of the foursome and everybody who didn’t make that shot picks up their ball and takes their next shot from that position. I’m pretty sure they call it a scramble because everybody but the one who made the best shot is scrambling to find and retrieve their ball.

Next shot, she takes a seven iron and blasts that puppy right at the flag on the green, but it lands in the bunker (some call it a sand trap). She says something very unladylike and the next guy takes his shot. He’s short, but in the fairway. Then the third. He makes the green, but the green is fast and it rolls off the back side. I bring up the rear, a position with which I have become all too familiar. I look at the distance tentatively. It’s still a long way to the green and irons aren’t my strength. I grab a three wood and ignore the derisive comments and laughter coming from the rest of the group. I shut ‘em out and smack the crap out of the ball again. At least that’s a satisfying part of the game. To everybody’s amazement, including mine, the ball soars to the green... and it has enough loft to it to bury itself about six feet from the pin when it returns to Earth. It was the best shot I made all day. Things went downhill from there.

I can’t recall which hole it was, but somewhere right before we started the back nine, the devil showed up. We rounded a corner in our golf carts and found the hole from hell. The tee sat on a high bluff almost completely surrounded by high rock walls. There was a narrow opening to what I presume was the fairway flanked by trees and underbrush. Nobody could see the pin. Apparently it was at the end of a dog leg left. One of the group decided that the shortest way to the fat part of the fairway was to go over the high rock wall. It was higher than he thought. He smacked the ball only to have it ricochet off the wall and scatter the rest of us as it came screaming back. He was the only calm one there.

He set up again and tried for the slender opening down the middle. I lost the ball in the air, but there was no mistaking the ‘thwack!’ as it hit one of the trees to the right. He decided to try to find it. The next one up tried the same shot, but he put some English on it and hooked it. I watched this one until it disappeared somewhere to the left. He was confident he’d hit the fairway on the dog leg. I stepped up. I didn’t even try to aim the ball. I just hit it as hard as I could and hoped for the best. For all I know, I knocked that little white orb into orbit. I never did find it. Finally, our pro-in-training set her ball on the women’s tee. That gave her about a ten yard advantage, but after all, she was a girl. I vowed never to say that again. Ever. While all of the men’s balls had gone to who knows where in perdition, hers found a home in perfect position in the middle of the fairway dog leg.

To make a long story short, the rest of that course was a miasma of bunkers, nasty roughs with rattlesnakes in them, water hazards, and impenetrable forests designed to make even a good amateur want to turn his clubs into scrap iron. At the end of 18 holes, I was exhausted. I wanted a nap, but the company had signed me up for 18 at another course later that afternoon. I’m convinced they were trying to kill me. Never-the-less, I suppressed the aches, ignored the injustice and soldiered on. Nobody could say I wasn’t a trooper... or a glutton for punishment.

There's a course in Virginia that has only one straight fairway... and it's a par three. I played that one exclusively with a 7 iron. I even putted with it because one of our foursome said it couldn't be done. Oh ye of little faith. But the most interesting thing about this one is its abundance of wildlife on the course... and I mean 'on the course' quite literally. One of my military buddies gets excited about that. He calls the critters "live targets." There were geese on the fairway on hole four... big Canada geese. Jokingly I pointed and said, "Look, live targets," and put that 7 iron to good use. Wouldn't you just know it... yeah, that's right I nailed a goose... right smack in the middle. He went down. My partners were horrified... except for my military buddy. He grinned and said, "Nice shot! You birdied the hole!" Luckily, the goose got up as we approached or PETA would still be looking for me.

Then there's Beelzebub's Playground in Maryland. It's lined with exclusive "Members Only" homes on three sides. I made some of my most memorable shots there. I caromed one off a roof top that landed back in the fairway. I dropped a mini-bomb in some woman's Bloody Mary as she enjoyed the afternoon on her patio. I narrowly missed a big picture window, but managed to hit the homeowner. He was not pleased. I found every water hazard and briar patch out there. I left more balls on that course than I could count, and I had to borrow a ball to play the last hole. Damned if I didn't lose that one. None of my partners would loan me another one."Just take a five and call it good," one of the foursome said.

As I got to thinking about the days when I was on some course in some state every month or less, I got a bit nostalgic. I didn’t have a whole lot going on, so I went out to the garage, brushed the sawdust off my clubs, checked my ammo bag of golf balls, and got hold of Duncan Donutz, Bingo Bob, and Colonel Duffer to see if they wanted to hit the links. They sounded eager. None of us had played golf for about a year, but we talked about it fairly often. Now, it seems, it was time to act. Putt up or shut up, so to speak. We all piled into Lizzy 13 after stowing the clubs in the back and headed for this off-the-beaten-path club near Castroville that offered a senior discount. They even threw in the carts at a reasonable price, probably because it was pretty dead out there.

We eagerly approached the first tee. I was feeling pretty good. It wasn’t too hot and there was a nice gentle breeze blowing. I volunteered to tee off first. That Big Bertha driver felt pretty good in my hands after a year’s layoff. I set my tee in the ground, balanced one of my three remaining Callaway Hex Warbirds (I was feeling lucky or I would have never used such an expensive ball), and took a practice swing before stepping up to address the ball ("Hello again... I've missed you"). I planted the spikes of my golf shoes firmly, looked down the fairway and WHOOSH... I let her rip. The ball shot off the tee, made a U-turn about fifty yards out, and came right back at me.

“Wow,” Duncan whispered in amazement, “I don’t think I’ve ever seen a golf ball do that... that was one helluva slice.” After a moment’s pause, he added, “Mulligan?”

Now I remembered why I hadn’t been golfing in a year. I did get off a couple of really good shots during the game, though. and my putter was hot, so maybe I just needed more practice, I thought. Then that other little voice in my head popped up and said, “Don’t be an idiot... the devil’s out there waiting for you.”
Posted by S. Bradley Stoner at 6:45 AM