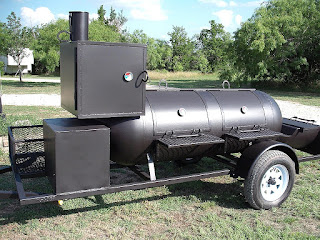 Saturday. In the summer. In Texas, that spells barbeque. But I grill. There's a difference. Trust me. Duncan Donutz, the cop down the street barbecues... Texas style. Well, at least suburban Texas style. It's not like he has a big fire pit with a hand crank spit over it with which he can skewer a whole side of beef  to slow roast while using a push broom to slather on homemade barbeque sauce from a 55-gallon drum. He does, however have one of those monstrous charcoal grills made out of sheet metal. And it travels. It takes three bags of charcoal and two cans of lighter fluid to get it going. How do I know... I can see the fire ball in his backyard every time he fires that puppy up. Not to mention the whole neighborhood gets to put up with the smoky haze that hangs over it for the next 48 hours. Once you get past the stench of benzene, the mesquite chips he throws on the coals smell pretty good. 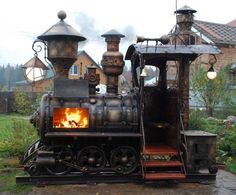 Duncan, however, is not satisfied with his grill anymore. He saw this picture on the net somewhere and is threatening to visit all the local scrap yards, get out his welder, and "make me a new one." He showed me the picture. I was impressed. Who wouldn't want a grill like this? It's awesome... and if you built it right, you could put it on the tracks and take a cross country trip and eat well all at the same time. I don't think he'll get to it, though. He doesn't have room in his garage to build it. There are forty two other projects he started and never finished. I'd build it, but I don't have a welder anymore and I don't think I have room in my backyard.

I use a gas grill... you know, one of those that you hook up a propane bottle to feed the burners. It's easy and convenient. No charcoal soot to wash off your hands. No charcoal lighter cologne to waft in your wake. No perfidious smoke to permeate your porch. You just crack the valve on the propane, turn on a burner, and light her up. No fuss, no muss.

For years I used a good old CharBroil two burner. It was all I needed. It's really all I need now that there are just two of us left in the house. How much meat do I need to put on it anyway? A few months ago, however, my youngest came home for a visit. When I opened the top of old reliable, he looked at the badly rusted and burnt grate and said, "Is that safe?" I took my wire brush and scraper and cleaned off the char and rust to reveal what was left of the grate and replied, "Yeah, it's fine. I probably need to buy a new grate for it though. These Walmart replacements only last about a year."

Well, he comes home for another visit two months ago and wants to take me somewhere to buy me a Christmas/Birthday present since he missed both of them on account of the fact that he was on the road. I told him that was okay, I didn't need anything. He insisted, so we piled into my Explorer... he said the little rental he had wouldn't be big enough. I didn't question that. After all, he was driving what one of my wife's relatives used to refer to as a "pregnant roller skate." It was smaller than my wife's little Suzuki and didn't look like more than one grocery bag would fit in it. Anyway, off we went to the local sporting goods store.

When we got there, we wandered through the fishing section, checked out the guns, looked at the new coolers... there was a really cool wheeled one with rod and cup holders that I made the mistake of commenting on... and then found ourselves in the outdoor grilling section. "I'm buying you a new grill," he announced, "that old one needs replacing." Old reliable? All it needs is a new grate and a warming rack. My protestations fell on deaf ears. "Pick one out," he said. I looked over the selections. I looked at the two burners... the ones that had smokers on them... the four burner drop in models... heck, I could have spent an hour just admiring the variety.

The kid steered me to a couple of big grills... which one of these do you like best. I looked them over. The one with the stainless steel lid was classy... and it was a CharBroil. They called it a "Traditional," but I'm not sure why. All the old traditional ones were two and four burners. I made the mistake of telling him that it had class. He left me to wander while he went somewhere. Knowing the kid, I figured it was the can. He's had a fascination with public restrooms since he was little... he likes the way they echo when he sings or whistles. But I was wrong. He returned with a clerk, whom he left by the big CharBroil while he went to find me and haul me back. "This one?" he asked simply. I nodded silently... it was the classy one after all. 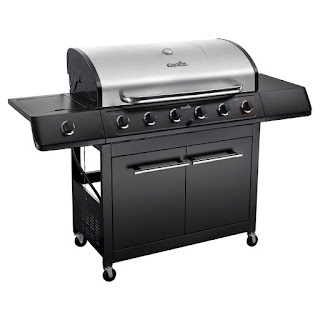 He asked the clerk if they had one already assembled so we didn't have to put it together. Turns out the one we were looking at had just been assembled that morning. "We'll take it," he said, "haul it up to the front... did you take that cooler up there too?" he asked the clerk. The clerk just nodded. "Okay then, let's go pay for these and head home." Getting the beast into the back of the Explorer was no easy task. It took three of us to get the job done. We had to take out all the heavy porcelainized grates and stack them separately so they didn't fall out and damage the lid of the grill. And then we had to shift it around so the cooler would fit. At least getting it out wasn't half as bad.

Now it's parked on my porch. So is the old one. I'm running out of room, but as soon as I get the bridge I built out of the garage, I'm going to put the old one in there until I can fix the wheels and put a new grate in so I can put it in a garage sale. I have used the new grill... it's great, but I have yet to turn on more than three burners... the sear unit and two grilling burners. Sigh. Well, one of these days I'll kill a cow and invite the neighbors over. Maybe then I can find out its true potential. I've already taken the cooler for a test drive... it works great! Maybe I'll bring home some fish the next time I come home to put on the grill. If I catch a really big one and some shrimp to saute, maybe I'll get to use all six burners.