The Square Peg - NO SOLICITORS 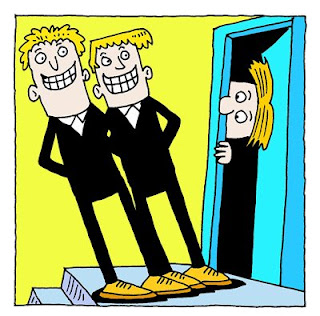 I had a sign up on my front door that said "NO SOLICITORS." It was a very nice sign. Metal with nice raised Gothic print. I didn't put it there... it came with the house. But I liked it. It warned all those sales people that I wasn't partial to having my day disturbed. Of course, sales people being sales people, that didn't deter them one bit. I think they viewed it as a challenge. After a few grumpy "Not interested," greetings, the persistent peddlers sort of left me alone. Then one day, my pretty little sign just up and disappeared. I'm pretty sure it had help. Since then, it's been open season. So, now that I'm retired, I just mess with them.

Take for example the two Jehovah's Witnesses that showed up. I saw them coming. I pretended not to be home. For some reason they didn't buy it. Maybe it was the TV playing in the background, I don't know, but you'd think after ringing the doorbell twenty times and pounding on the door another five, they'd get the message. Apparently they only get messages from one source, and it isn't me. Just to make them stop, I finally opened the door a crack. They smiled benignly at me.

"Have you found the Lord?" they asked piously.

I stared at them, shook my head a little, and responded, "Have you lost Him again? You gotta quit doing that!" And then I shut the door. I'm thinking if they come back I'll answer the door in the nude and shout, "And the man and his wife were both naked and were not ashamed." Maybe they'll stop leaving their literature in the door.

Then there were those roofer that came by after we had a bit of a wind storm. Now understand, that our roof was undamaged... well, it was after the kid and I replaced a few shingles (I keep matching ones for just such contingencies). I didn't really want to answer the door for them either, but they looked sort of rough and I thought they might be looking for an opportunity to burgle my bungalow, so I opened the door just a few inches and growled, "Yes?"

"Good morning, sir! We're with Acme Appraisals and we noticed your roof has been damaged. We can do an insurance appraisal that will guarantee your homeowners insurance will pay for a replacement.. and we're very reasonable."

What kind of idiot do they think I am? Insurance companies do their own appraisals, and you don't have to pay them for it. I was kind of curious about what they thought was reasonable so I asked. I knew better. That was an invitation for a long spiel extolling the services they provide.

"Two hundred dollars," the lead guy said, and before I could get a word in edgewise, "and if you own three or more properties the price drops to one seventy five. Now that's a real deal when you consider the thousands of dollars you could save..."

I raised my hand to stop it before it went too far. "That's okay... just leave me your card so I can get in touch... with the Scam Squad at the Sheriff's Office and Bureau of Corporations." I'm still ticked off about that shingle we found that had been torn from its moorings on the garage overhang after their visit.

And then there's the pest control guys. Pest control is big business in Texas... probably anywhere in the 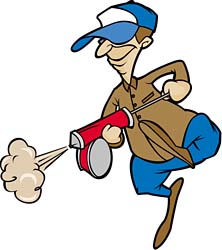 South, 'cause we got bugs! Yes sir, we have bugs of every shape and size. We have Palmetto Bugs... for those of you who don't know what that is, it's an American Cockroach that achieves the size of a small tank, but once again I digress. Not only that... we have critters... and some folks consider those pests too. Not me. I don't mind critters as long as they stay outdoors.

Anyway, I was outside the other day finishing the decking on the garden bridge I'm building, saber sawing a notch to fit around a support post for the top rail, when a fellow shows up outside my garage and leans against the door jamb. I see the truck that is following him and his partner across the street as they make the rounds of the neighborhood. He waits until I finish the notch and look up. We exchange pleasantries and he launches into his sales pitch.

By golly, they can bomb my bugs, murder my mosquitoes, annihilate my ants, caramelize my cockroaches, pulverize the potato bugs, trash the tomato worms, terminate the termites, vaporize the vermin, and wipe out the wasps that might be on my property. "Yes sir, we'll spray down you yard, the exterior of your house, treat the inside, we'll set sticky bug traps at every strategic location on their little bug trails..."

I only let him get this far because, well, it was kind of entertaining. Sometimes enthusiasm can be fun and sales pitches colorful. I didn't want to be too mean and let him get all the way through to tell him I wasn't interested. That would just be cruel, and I am not by nature a cruel person. That's why I don't like those sticky traps... my geckos get stuck in them and then I have to use some of my good cooking oil to unstick them. After all, geckos are built in pest control down here. I'll take geckos over sticky traps any day. I have a Morning Glory bush for my bees and wasps... I don't know what's in it, but it mellows them out. They're like stoners on pot after they hit that bush. And what would happen to my birds if they killed all the bugs? Bugs are bird food. Sure they take a bite or two out of my plants, but they have to eat too... or my birds would go hungry. Not happening.

"I take care of my own pest control," I said, "but thanks for stopping by and you have a nice day."

Of course he was a bit crestfallen... he was certain he had a sale. Then he got just a bit aggressive... like that was going to work. "What do you use?!" he challenged.

Ahh, I understood... younger generation, anti-pollution, anti-toxic (at least to those above bug level)... sorry, I'm being un-PC - I should have said, 'environmentally conscious," unless that's passe now. I don't keep up like I used to. "I use the same stuff you do."

"Home Depot," (really, that's one of my favorite places. My wife contends that I single-handedly was responsible for the raise the clerks got there). "It comes in one-gallon jugs with a battery operated spray wand. Really convenient."

He said something about theirs being like a hundred times stronger, which I'm pretty sure isn't true, but if it is, that's just overkill.  I spray around the house, the doors, windows, and inside along the baseboard once every three months. I found two bugs in my house this year... both dead. I figure they sneaked in when I came inside. Point, is the stuff I use works. Not to mention that it costs me about three bucks a quarter versus the pest control guys'... well, no need to get personal, let's just say its similar to the strength of their bug spray.

Of course, I relayed this vital information to the bug guy. He tried telling me how the service would give me more time for other projects like the one I was working on. He was really disappointed at my response.