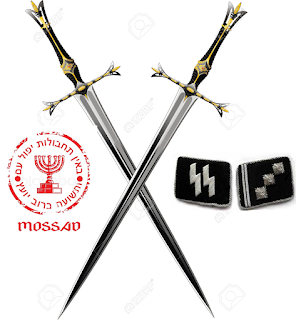 Yossi ben Avrim’s shoulders sagged just a little. The debrief had been brutal. Ari Netanyahu, a distant second cousin of the hero and former president of Israel had been angry with him. Yossi didn’t blame him... he was angry with himself. The chance to eliminate a key link to the unholy future they new lie ahead had been missed. Hans Bruchmann, whose family traced its origins to before the middle ages and considered themselves among the purest of Aryan blood, was the tip of the spear for von Schumman’s Reich Auferstehung (Reich Resurrection, now more commonly called the Fourth Reich), charged with protecting its secrets and eliminating its enemies. Had Yossi been able to eliminate Bruchmann, von Schumann would have been exposed and the Reich would have folded like a house of cards. But now that was beyond their reach.

He was stopped as he approached the exit. There was urgency in the guard’s voice. “You’re to report to Director Netanyahu immediately.”

Yossi knew better than to ask the guard why. He wouldn’t have any idea. He turned on his hell and marched back down the lit hallways until he came to Netanyahu’s office. The Director’s secretary said nothing, just motioned toward the partially open door. ben Avrim crossed the room quickly and slipped through the door into the spartan, windowless office. “Director?”

“Sit,” Netanyahu motioned at the chair in front of his desk. “We have encountered a problem,” he stated matter-of-factly. “One of our operatives has been identified and captured. We need to recover him.”

“I can be prepared to fly in an hour,” Yossi returned, eager to be back in the good graces of the Director.

“It’s not quite that simple,” the Director sighed. “I wish it was. This mission requires you to travel through time.”

ben Avril just stared at Netanyahu, not knowing quite what the Director was proposing.

“Don’t worry, it’s been done many times before. You will be flown to a secret installation outside of Ar-arat BaNegev. For security’s sake the helicopter compartment is blacked out. That way if you and your team are caught and tortured you will not be able to reveal its true location. You, and your team have been chosen for a very simple reason... all of you are blond and blue eyed... and you speak fluent German. Where you are going, that will be extremely important.”

Yossi started to speak, but the Director waved him off. “You will be fully briefed on-site. Now go... there is a helicopter waiting on the back pad.”

Deep below the Negev sands 80 kilometers outside of Ar-arat Ba Negev, David ben Zaken and his team clustered around the Continuum Interrupter. It had worked as planned, damaging the control mechanism on von Schumman’s machine, but not destroying it as had been hoped. The communicator on David’s belt buzzed impatiently. He stepped away from the group to take the call. “Yes,” he answered. The call was short and to the point. Preparations had to be made. The Interrupter would have to wait. He summoned the crew and moved to another secure room. It was much larger with an oblate torus at its center. While part of the crew went to attend the device, ben Zaken and the senior staff made for the conference room adjacent to the control room. The travelers would arrive within the hour and a full briefing had to be prepared and delivered when they got here.

In Berlin, Rebecca sat in the small cafe sipping coffee. The paper’s headlines blared yet another warning about the possible collapse of the EU and fall of the Euro. von Schumman would greet such news with eager anticipation. It would make his task much easier and the installation of a puppet Fuhrer much simpler if the collapse of Greece fulfilled the doomsday predictions of the political pundits and resulted in that domino effect that would ruin Europe’s economies. It would play into her plans as well. She didn’t even look up when the handsome blond athletic specimen of a man sat down opposite her and said softly, “guten Tag, Fraulein. Wie ist de Nachricht.”

“The news is bleak,” Rebecca responded quietly, and laid a two Euro coin on the table. “Soon this will be worthless.”

The handsome stranger picked up the coin and studied it. The coded response had been correct. Nonchalantly, he flipped the coin, caught it and slipped it into his pocket. “You may well be right,” he said, then steered the conversation to more pleasant items. When he finished his coffee, he politely said, “Danke, verfehlen , für das Gespräch.” He tossed a two Euro coin to the waitress as he left. She returned his smile and pocketed the tip.

Rebecca nodded and continued with her coffee and newspaper. When she finished, she carefully folded the paper, put it in her bag, and casually left the cafe without glancing back at the man who tailed her. She had seen him right off, following her in when she had entered the cafe and she recognized him as one of von Schumman’s minions. She had grown accustomed to being followed... von Schumman trusted no one.

Once Rebecca and the two men were gone, the waitress turned in her apron and left the cafe. She would rendevous with Moshe, pass the coin, and perhaps engage in a little flirtation. Moshe was, after all, a very good looking fellow and quite fun to be with. She knew, however, it would lead to nothing. Moshe and the coin would take the El Al flight to Tel Aviv within three hours.

Yossi reflected on the briefing as he changed into the uniform... a symbol of everything he despised, but absolutely necessary for this mission. Why, he had wanted to know, couldn’t he simply return to the time Hans Bruchmann had been in his sights and finish him off before all this had begun?  The time line, he was told only went back two years with this machine. They could go to the future and come back from there, but not very far into the past. That didn’t make any sense to Yossi, and when he pursued it, ben Zaken had pulled up the formulas and calculations on his tablet, which only served to give Yossi a headache. Math was not his strong suit, so he let it drop. His specialty was covert ops and weapons. The latter, he had been informed would be in the room in which the team would arrive. Teleporting weapons into the future apparently wasn’t possible either. Yossi began to wonder if teleporting people was possible, but dismissed the thought. He had his orders. When he and the five members of the team dressed in the dreaded SS uniforms were in the chamber, a slight hum pervaded the space... and then they were gone.

von Schumman sat at his office desk in the complex finishing his review of progress reports on the repair of the machine. His impatience grew with each passing day.The machine needed to be operational... and soon.  He looked up sharply as his aide marched sharply into the office, clicked the heels of his boots together and snapped the fascist salute. “Wo ist der Gefangene?” von Schumman demanded.

The aide was puzzled. “Sir, the Obersturmfuhrer collected the prisoner over an hour ago. It was confirmed by the intelligence officer that he had released him to SS custody for transport.”

“So... where are they?!” von Schumman brought the cane down hard on the desk top and it cracked like a pistol shot. The phone rang at that moment. “Ja. Wer ist es?” he barked. It was one of his special agents. He listened quietly for a moment and then exploded. “GOTT IM HIMMEL! What do you mean DISAPPEARED?!” von Schumman sat down heavily and rubbed his forehead. This could mean but one thing... To be continued.

Place this message at the end of your completed blog entry, and wait for someone to accept the challenge of taking this story on as you did. Once the next post is in place on your blog page, post another comment below, with link, to let me know and I will re-post my part with that link to your next part of the story. If someone has already offered to take the story from here, please feel free to leave a comment saying you would like to play too, and should we run out of volunteers we can go back and beg you to take over where the chain ends. Thank you and we shall be interested to see where you take it.
Posted by S. Bradley Stoner at 11:33 AM