It's the LAW... or is it?
Copyright S. Bradley Stoner 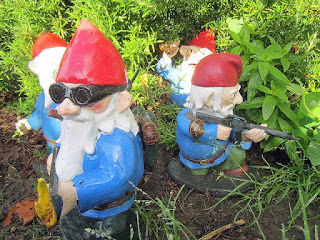 I ran into my neighbor Gertrude Goodcook on my walk this morning. Gertie stopped me. She was agitated. I made the mistake of asking her why. It turns out Gertie was incensed by something she read on the Internet. According to her, I and all other home gardeners are about to come under the thumb of the government. This wasn't an ordinary thumb... it was a special one. "The government," she declared, "is taking away our right to grow our own food! It's the LAW!"

"Doesn't matter," she said, "those big food companies have infiltrated every government in the world... they're going to control everything. They're going to make serfs of us all."

"Wow... that's a pretty ambitious plan, even for Monsanto," I rejoined.

"It's true," she groaned, "and Monsanto's the worst of the lot. They're going to force us all to eat that GMO stuff they control. And they can do it... only they hold the patents on that stuff. They're going to control all the seeds too... they're going to make it impossible to get real seeds... ones that haven't been tampered with."

"Geez, isn't that going to mess with the paleo-diet bunch?"

"You got it," Gertie snorted. She must have noticed the twinkle in my eye and figured I was poking fun at her.

Gertie jabbed a finger at my chest. "Just look it up on the Internet," she menaced. "It's all there... you'll see."

Well, I finished my walk and headed home, fired up the old computer, and brought up my search engine. I used to program back when DOS and BASIC were the norm and I use boolean operators for my searches... it helps narrow the responses down from millions to a few thousand. That seems to be about as narrow as you can get these days... there's a lot of crap on the net. But I digress. I typed in, "grow your own food and government won't let you." Holy tomato seed, Batman... there were zillions of hits.

Youcan'tdothat.org warned of the dire consequences of government control... and yep, I found that "serf" thing in there. Itolduso.net echoed the sentiment with the notation, "...government agents and even private agents (employees of the GMO companies) can raid your home, confiscate your plants, and destroy your means of feeding yourself..." They'll take your spuds, bud... they'll trample your turnips... they'll crush your corn. OMG the GMOs are going to COL (okay... that's not an acronym in use... I invented it. It means Control Our Lives).

One net page blares "URGENT PUBLIC HEALTH WARNING" and cautions us that "...what we are about to see is highly controversial..." and then says something about 46 thousand secret government memos that we "never wanted to see." Well, I wanted to see those secret memos... wouldn't you? I read the site from top to bottom and you know what? Note a single government memo was there. Not one. Not even an excerpt from one. But the site sure interpreted what it saw in those memos... interpreted it into the longest and sneakiest sales pitch for a book and "grow your own" products that I have ever seen. But wait... if the government and GMOs control all the seeds... oh never mind. If you run across it... skip it. You'll save yourself eyestrain and disappointment.

I got tired of all the hype and decided to go find the organic documents (that means the originals, not GMO-free, you silly goose). Well, it turns out HR 875 has been modified more times than Monsanto corn. And it isn't getting stronger... it's been watered down. Here's the chronology with the bill titles:


To establish the Food Safety Administration within the Department of Health and Human Services to protect the public health by preventing food-borne illness, ensuring the safety of food, improving research on contaminants leading to food-borne illness, and improving security of food from intentional contamination, and for other purposes.


113th CONGRESS 2d Session H. R. 875
[Report No. 113-667, Part I]
To provide for a comprehensive assessment of the scientific and technical research on the implications of the use of mid-level ethanol blends, and for other purposes.


Cross-Border Trade Enhancement Act of 2015
Authorizes the Commissioner of U.S. Customs and Border Protection (CBP) to enter into agreements with certain persons for the CBP to provide customs, agricultural processing, border security, or inspection-related immigration services at a land border port of entry, subject to payment of a fee to reimburse the CBP for providing such services.

It's the LAW? Not quite yet. But I've got to tell you, if we could get those GMO guys to hire politicians to work in their labs, we'd all be saved. Those modified seeds would be back to their natural state in no time at all. In the meantime all you Government Meddling Organizations... mind your manners around my 'maters... keep your cottonpickin' claws off my carrots... stay away from my spuds... I live in Texas. We know what the Second Amendment is... we know WHY it was written... and we have a Castle Law on the books (and it IS a law).

Thank you, and you have a peachy day... yeah, and don't touch them either!