Ha! I got a Garmin NUVI for Christmas a few years back. I was moving into the electronic age. Right until I turned the #@%$ thing on. I wrote down my first thoughts and a chronicle of my inaugural drive with my very own new marvel of GPS technology. And here’s how it went. 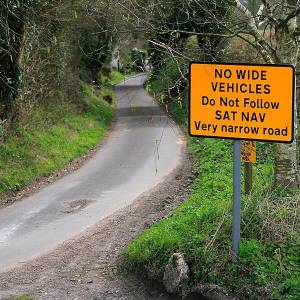 I shall NEVER be lost ever again! I shall go brainless into the tangle of turnpikes, rummage the routes, and investigate the interstates with nary a care, for Garmin shall protect me from deadends and lost lanes! Google maps laid out on my passenger seat... a thing of the past! From it's eye in the sky, my trusty Garmin will track my inexorable progess and inform me in dulcet tones, "in 500 feet, bear right... in three hundred feet, bear right... in one hundered feet, bear right.... TURN RIGHT NOW!" I can almost hear that followed by "Moron" as it assumes a more normal tone and says, "Alright, recalculating..." okay, it didn’t say “alright,” but it might as well have, given the tone of Garmin’s voice.

Now, I've driven with one of these GPS devices in the vehicle before. Very handy in unfamiliar surroundings and strange cities. Very annoying when YOU know the shortcuts and have it turned on. That happened on a recent trip - I KNEW how to get to the interstate, but the Garmin (whom my friend fondly refers to as the "B#$@! [rhymes with rich] in the Box") kept trying to get me to backtrack four miles instead of taking the easiest access a mere quarter mile away. Garmin apparently did not know that the approach road was a two way, not a one way.

"Recalculating..." You could almost hear the sigh. "Okay... proceed 1.2 miles, then take exit 134B to your right..." We're busy chatting, I don't need to pay attention to the exits, Garmin will take care of that for me. "In one thousand feet bear right onto exit ramp 134 B." I guess I should have paid more attention... I was in the middle lane, not the right and we were in Dallas - way too much traffic to make it over to the right hand lane in a mere thousand feet. I tried... those inconsiderate, $#%^&*! drivers wouldn't let me in... they ignored my turn signal. I could hear it coming... "Okay, Stoopid, you can't follow directions... did you have this trouble in grade school??" But, no, a simple, "Recalculating" and that inaudible sigh.

In the heavy traffic this was to repeat itself no less than five times... well, maybe four.  Finally, however, we were delivered to our destination after having taken some very colorful detours. "You have arrived at your destination." You could almost hear the, "Oh thank God! I hope the next driver isn't such a dunce."
I don't think I will use it when my lady and I go on our next trip since we oft take the road less traveled and never stick to an itinerary. What's the fun in that? Some of the neatest things we've seen have been when were were seemingly lost. Imagine Garmin's reaction to such wanderings... "What are you doing? You are utterly and hopelessly lost, you idiot!"

It took only a few more trips with Garmin to convince me that she was out to destroy me.. or least drive me crazy. I put her back in her little box and hid her away until I hit that point of compete desperation in some east coast city that I must consult the oracle of the open road.

Post Script: True to my word, Garmin mostly sits in its little box hidden away in the vehicle, sentenced to languish there until I get myself in some tangled mess of traffic in a city with which I am completely unfamiliar. Then, and only then, will I haul her out to help me... and only if my lady isn't along. She dang near threw Garmin out of the car the first time I used it with her along.

Side note: I haven’t updated Garmin in about six years... maybe I should. On the other hand, she’ll likely just find new ways to get me hopelessly lost.
Posted by S. Bradley Stoner at 12:10 PM