So You Want To Be A Cowboy...
Copyright S. Bradley Stoner 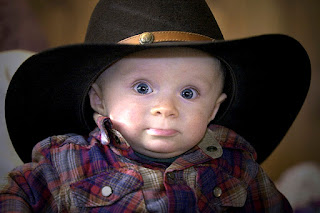 I swear, I think Harold must have sired a whole passel of kids in his travels. I keep running into them. Take Dwayne, the kid is about as clueless as a bloodhound with a snoot full of cayenne pepper. Dwayne showed up at our house the other day in his pickup truck. I guess you could call it that. It has a cab and a bed, but the passenger door is permanently closed and the only way to open the driver’s side door is to take the window crank off the dash, push it on what remains of the crank stem, roll down the window and use the outside handle. On top of that, the bed is cockeyed, the front bumper is hanging by a thread, and the tailgate is decidedly bowed from Dwayne repeatedly backing into trees. You can hear that truck coming for blocks. He put glass pipes on the exhaust and it has a sound system that cost more than the truck. I guess you have to get your priorities straight.

Now for any of this to make sense, you need to have a mental picture of Dwayne. He’s about six foot two inches tall, reed thin, poor posture, and no muscle... except, perhaps, for the one between his ears. Don’t get me wrong, Dwayne is a nice kid... says, “Yes sir,” and “Yes ma’am” like any properly raised Texas boy, but when it comes to smarts, he’s about two pecks short of a bushel. Oh, and he’s bowlegged... not because of a misalignment or because he spent years in the saddle. It’s due to years of practice. You see, at some point in his young life Dwayne decided he wants to be a cowboy. The first time he told me that, I looked at his sneaker clad feet, the ragged t-shirt, the off-center baseball cap, and remarked, “Well, right now you look like an unemployed rapper. You’re going to need a pair of boots and a proper hat.” As usual, I was being a smart aleck.

Danged if the boy didn’t go out and buy himself a pair of cowboy boots and a big, wide-brimmed hat that sort of makes him look like a pin head. I told him he might have considered a smaller one. “This is what the cowboys wear,” he replied solemnly. To complement the hat and boots, he wears jeans and a plaid western shirt. I don’t think he’s changed them or washed them since he put them on two years ago. They’d probably fall apart if he washed them now. He also bought a wide leather belt and a huge belt buckle with a bucking horse on it. He must have seen one like it at the rodeo.

I was out putting rose food on the roses when I heard him coming. I should have made my escape, but I’m a shade slower than I used to be. Dwayne gave me a half wave and said, “Howdy, sir.”

“Ummm,” he hesitated. I wasn’t sure if he didn’t understand the question, or was just working up the courage to ask me whatever it was he was going to ask. Finally, he launched into it. “Do you know where I can buy a horse?”

“What do you want a horse for?”

“I want to be a cowboy,” Dwayne replied with shining eyes.

“Um, yeah... you told me that. Look Dwayne, owning a horse doesn’t make you a cowboy.” I knew for a fact that the closest he had ever gotten to horses was gazing across a fence at them at the local stables that rented them for trail rides down Mud Creek. “Have you gone out and talked to any of the ranchers? You know, like a career day thing.”

“No sir. I don’t know any, but I know you can’t work for them unless you have a horse.”

“Well, that’s not necessarily true. First off, most ranches have plenty of horses and ranch work involves a lot more than riding and herding cattle. Matter of fact that’s probably the smallest part of it.”

“Well, there’s growing and harvesting hay, for instance. That means irrigating, running a mower or a swather, and baling.”

“I can run a mower,” Dwayne said proudly. “I’ve been making money all summer cutting lawns.”

“Not the same thing, Dwayne.” I went on to explain about vaccinating, dipping (not snuff... Dwayne already did that), branding, castrating, dehorning, ear tagging, and pulling calves.”

Dwayne got a horrified look on his face. “Pulling calves? To where?”

I could tell this was going to be a long afternoon. I figured I might even have to drag out some old pictures. I started in, but I didn’t get very far. Dwayne’s mind wandered away... to where I’m not sure, but it was clear he wasn’t paying any attention. He does that a lot. “Hey!” I growled sharply.

I was tempted to say, ‘with what,’ but I restrained myself and instead asked, “Oh? About what?”

“I think I was supposed to go to court today.”

I thought about the stack of traffic tickets on Dwayne’s dashboard. How he keeps his license is beyond me. “What for this time?”

Dwayne looked down and toed the sod. “I got a DWI,” he almost whispered. He squinted at the sky. “I gotta go. I’m meeting the guys at Nipsie’s. We’re gonna wash down the trail dust. Thanks for the talk.”

‘And that,’ I thought, ‘is about as close as that young fellow is ever going to get to being a cowboy.’ Harold, wherever you are, I found another one of your long lost kids.
Posted by S. Bradley Stoner at 6:58 AM