The Square Peg - Terrorists... They're Everywhere! 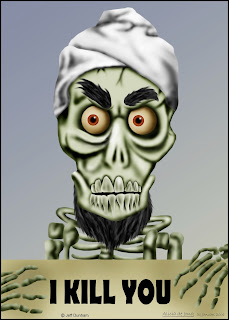 I took a break from writing, mainly because staring at the flat screen for hours on end was starting to make my eyes go screwy. Besides, it was four o'clock and time for me to start thinking about what I was going to fix for dinner. When I retired, my lovely went to work, not so much because of the money as the fact that I was driving her crazy. Or so she said. Hey, at least I wasn't following her around the house with a carpet rake. But I digress. I turned on the local news. I like to hear the weatherman mess up on the forecast. When he says, "no chance of rain for the next three days," you can bet your bottom dollar the creeks will rise and the streets will flood. It's sort of amusing... and it helps me plan my outdoor work.

Anyway, as soon as I switch on the idiot box, a big red rectangle with white letters declaring "BREAKING NEWS" pops up. It piqued my interest, although experience should have taught me by now that the media's idea of breaking news isn't... and by that I mean it isn't breaking and it isn't news. Today, however, it is followed by another notice in bold face type. "NORTH SIDE NEIGHBORHOOD TERRORIZED." Whoa! You've got my attention. Terrorized... in San Antonio? My mind conjured up visions of all kinds of mayhem and horror in the two seconds it took the anchor, Bert Drivel, to introduce the on-scene reporter. "And now we take you direct to Becky Blabber who is on the north side scene of the attacks." Oooh, attacks! I sat down.

"Yes, Bert, this is Becky Blabber on scene in this north side neighborhood that has been terrorized for the past three days..." Must be a serial killer or worse, flashed through my mind. "...by a pair of dive bombing birds." 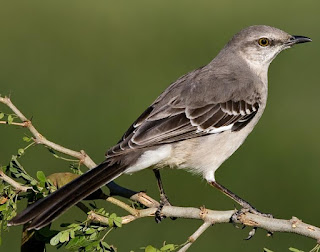 SAY WHAT?! Oh please... somebody call the FBI! Notify Homeland Security. Telephone the TSA... put them on the "NO-FLY" list. Send 'em to Guantanamo Bay! Water board those little suckers and make them tell you who heads their network!

"That's right," Blabber continued, "a pair of Mockingbirds has literally been terrorizing this neighborhood by diving at people's heads..." Literally? Seriously? Its a four ounce bird, for crying out loud. "...and here with us now is neighborhood resident, Tabitha Timid, to tell us what has been happening all this week. What are the birds doing, Tabitha?"

Tabitha adjusts her halter top, and puts one hand on her hip. "Well they've just been diving at folks every time they walk past that big tree! It's horrible... the only safe place to walk is on the other side of the street. I have two children and that's just not safe for them..." she simpers.

I'm confused. It's a nice, quiet, tree-lined street. Not a single car has driven past while Blabber has been broadcasting, and it's pretty clear that the cameraman is standing in the middle of the road shooting the interview. Not safe? When I was a kid we dodged traffic to retrieve our baseball... and I'm still here! I want to shout at the screen, "You're turning America into a nation of pantywaists... you're wussifying our kids. For the love of God... STOP IT!"

"Before you go, Becky, can you tell us if there have been any injuries from these attacks?"

"Well, Bert, in our conversation with police officials, we understand there actually have been some injuries, but none is considered life-threatening. According to police reports, Rhonda Runner fell and skinned her knee while trying to avoid the aggressive and vicious birds, while Brendan Bawler suffered a minor concussion when he ran into a tree as he tried to escape the attacks."

"Again, that was Becky Blabber on scene in north San Antonio. In just a moment, we will talk with Dr. Orno Thology, with the San Antonio Zoo, who will try to explain this bizarre behavior, but first this message."

The birds have a nest, you morons! Any idiot off the street could tell you that! There's a Karl's Kia ad on right now that is more intelligent than the crap Blabber and Drivel have been drooling over. I'm about to turn off the TV when Drivel interrupts his interview with Orno Thology... "Wait... just in... this breaking news report from Houston. An alligator is threatening a local community on the south side of the city. We take you now to Marvin Moonpie for an on-the-scene-as-it-happens report. What's the story, Marv?"

"Well, Bert, as you know there's been considerable flooding here in Houston over the past month, and the wildlife is showing up in places they haven't been seen before..."

"The wildlife was there for centuries before humans showed up and started building cities in their swamps, you halfwit, imbecilic ignoramus," I mutter at the screen. I know he can't hear me, but it makes me feel so much better to get it out. Once more my finger caresses the power button on the remote... but then I see, just creeping in from the right, this enormous gator, its mouth partly agape in anticipation... Marvin and the cameraman don't notice. I'm on the edge of my seat... "EAT THE MOONPIE!" I scream so loud the neighbors can hear it.

Then the screen suddenly goes black. The AT&T U-verse logo comes up with that little spinning circle at the bottom... I've lost my signal. "NOOOOOOOOO!!!!"
Posted by S. Bradley Stoner at 5:36 AM