Flying... I love it! Others? Not so much.
Copyright S. Bradley Stoner 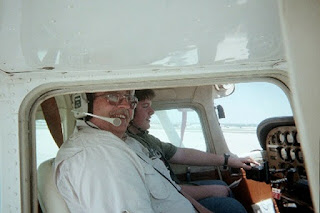 I love to fly. It doesn't matter whether it's in one of those big silver commercial birds, a single engine fixed wing, or a whirly bird. Flying is my idea of heaven. Others, not so much. I've been party to some pretty funny circumstances on aircraft over the years... and indulged in more than a few of what you might call... oh heck, I'll let you decide what to call it.

This of course brings to mind some of the flights I took when I worked for the National Guard in Montana. One in particular stands out. It was a flight we took on a C-4 (that's military for a Beech King Air twin engine prop). It was the plane that usually flew the Adjutant General around to various important meetings, but that day it was assigned to the Environmental and Facilities Maintenance Offices. Environmental because we had to do some ambient lead testing in the indoor shooting ranges in Culbertson and Miles City, and FMO because the engineers had to scope out some modifications.

There's something I need to tell you about the FMO engineer who accompanied us that day. He had a bad reputation when it came to airplanes... especially the General's airplane. Every time he flew on it something went wrong. They once lost an engine and had to put down in some Podunk town in Wisconsin. After the engine was repaired, the General made him fly the rest of the way on a commercial aircraft. I'm not saying the General was superstitious, but this wasn't the first time something bad had happened when the engineer was on board.

So, there we were, happily cruising along at altitude when all of a sudden the port engine started to race. The pilot, a Colonel with whom I had flown several times on helicopters, tried to throttle it back. Nothing. So he peeks back through the curtain that separated the passengers from the cockpit. "Hey," he calls out to me, "see if you can dig out the owner's manual in the cabinet and see if you can find out the problem."

My boss, the Environmental chief, who isn't very comfortable with flying in the first place, blanches noticeably and starts to fidget. As I'm looking through the manual, he croaks, "What happens if we can't fix it?"

I look up and say very seriously, "They'll have to feather the prop," and then I have to explain that means they'll have to shut down the offending engine. Now I know on a strong twin engine plane this presents no immediate problems. He doesn't. If possible, the chief gets even paler, and that's quite a trick for a fair-haired guy with a fairer complexion.

"What happens then," his voice had a definite quaver to it.

I winked at my fellow environmental worker. "Well, then we fly around in circles until we run out of gas."

The chief shot a panicked look at my partner in crime, an LTC in the Air Force reserve who flew KC-135 Tankers in Vietnam. "I..i...is that true?"

"'fraid so," he says laconically and we both hope he doesn't hear the pilot's stifled laugh.

I finally pinpointed the problem. We were flying at altitude and the humidity had been high when we left. "I think we're iced up," I yelled at the pilot, "the  fuel control unit linkage is probably frozen in the full open position. Better shut her down before she overheats."

When the pilot feathered the engine, I thought the chief was going to pass out. We should have stopped, but we couldn't help ourselves. "Well, guess we start that slow spin." My coworker nodded somberly.

"Will we have to bail out?" Now the panic was palpable.

"Can't," the LTC said. "No parachutes. Knew I should have brought my own."

The engineer rolled his eyes, but kept quiet.

I sat in thoughtful contemplation for a moment, then said, "Well, we just jump up in the air right before we hit, but you have to time it just right."

"Will that work?" he asked.

"Sure," replied the LTC. "The plane will be moving when it hits, but if you're airborne, you won't be. Just be sure you get out quick before the plane explodes."

The pilot had had enough. "Okay guys, knock it off. We've been cleared for an emergency landing at Miles City." He brought the plane in as smoothly as can be, but had trouble keeping it straight on the runway, so he shut it down about two thirds of the way in. Miles City isn't a busy airport.

We piled out of the aircraft and, while the rest of the group just sort of milled around, the pilot and I popped the cowling on the engine to take a look. Sure as heck, the linkage was encased in a mass of ice. He asked if I had any ideas. I told him I did... and it worked. I won't tell you what it was, but it involved a Bic lighter. Don't try this at home. I know what I'm doing. The others weren't so sure, and it was obvious that whatever I was doing was going to take some time, so the engineering party walked up to the terminal. After a bit, I flicked a finger at the remaining ice and it fell away. I brushed it off the engine and checked the linkage. Hurrah! It was free, The pilot and environmental group got back on the plane.

The pilot cranked the engines and sat for a few minutes to warm the engines and wait for the engineers. When they didn't exit the terminal building the pilot turned and said, "Guess they're staying. I'll ferry you guys to Culbertson and we'll come back for them when you're done."

We found out later that they had watched us take off, and the FMO engineer had told the rest that we were just testing the engines and we'd be right back to pick them up at the terminal... and then watched in astonishment as we disappeared to the north.

Oh, and once we were on the ground in Culbertson, the chief started to get some color back. I'm not sure if he ever forgave us for that, but I don't think he's flown since then... at least not in a small plane. Like I said, I love to fly... others, not so much.