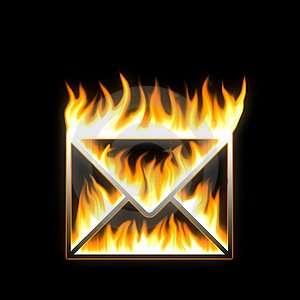 With a lot of help from my minions, I wrote a humorous blog yesterday... a real tongue-in-cheek response to the Fangirlie Nomination sent by Adele Archer. It wasn't that I didn't appreciate the gesture... it's just that I tend to be a real smarta$$ and my minions are even worse. It's what we do... and we're not very good with awards of any kind. Besides, I was tired of saying, "Aw shucks," blushing and stubbing my toe in the dirt. So I did what I always do in such situations... yep, I screw it up. Sigh. How do I know this? Hate mail... you tell me how they got my email address... I think the CIA, NSA, and MI6 all released my private info across the net. I don't know about the KGB... Vlad's email was a bit of a surprise. I didn't think I'd slighted him at all. More about that later.

Just a few examples. Laura Bush indignantly told me she didn't read romances... she's into cookbooks and flowers. Then she said she was going to have a bill introduced in the Legislature to have me kicked out of Texas for "being impertinent." I'm glad the legislative session is over, and I hope she forgets by the time the next one rolls around. I was tempted to write her back and ask her who knows more about Dubya than her, but I was afraid she'd pull strings and have our Governor call a special session to deal with the "internal threat" to Texas' reputation, so I didn't. I may have to write George and Babs for moral support if they aren't too busy helping Jeb.

Hillary was equally offended. She demanded to know how I knew about her secret meeting with Putin and told me she could "hold her own" with any male leader out there, although she did confide that she liked Cinderella and was a big fan of The Art of the Deal. On the other hand, she did not appreciate my implication that she had issues with the truth and told me it was immoral to mislead the American public that way. I think, rather than taking issue with her in an email battle that will simply wind up getting me subpoenaed by the House Committee on Idiot Affairs, I'll just hack her account and leak all those messages to Karl Rove on election strategy.

HRH Queen Elizabeth II was a bit more gracious in her response, saying, "It is not Our policy to respond to such enquiries from Colonials." She went on to say that an inquiry would be opened on my "abuse of the Queen's English with a possible suit ensuing over my libelous comments regarding the use of 'u' in such words as favourite," leading me to believe I might be our of favor with Her Majesty. Well, nuts, there goes my dreams for a tour of Buckingham Palace and a royal audience. I guess I shant be having spotted dick at the royal table after all.

Most surprising of all, Vladamir Putin sent a scathing email demanding that any reference to him meeting with either Hillary or the Queen be purged immediately or he would issue sanctions against me and send his minions to recover my copies of the Gulag Archipelago and War and Peace, but said nothing about my Vladimir Sorokin's Day of the Oprichnik volume, go figure.Then he had the audacity to tell me I wasn't perfect, that he was the only one who could make that claim, and if I continued to try to usurp the title he would "go Baltimore" on me. That's a frightening thought.

Then there were the letters from feminists that called me "a sexist pig," demanding to know how dare I "stereotype women" with such outrageous claims that they might prefer romances over more substantive works? I have just one thing to say in that regard... look at the best sellers on Amazon... I don't think guys are buying those. Yeah, I know I'll just get more hate mail on that comment, but statistics don't lie, do they? And, frankly, what's wrong with a little escapism? Men read thrillers for that reason, so to each his/her own, I say.

And Hillary supporters... don't even get me started on that bunch. Good thing I set up my spam filter on those venomous wretches. They filled my spam folder up in less than two minutes... and I have a lot of memory in that folder. It dang near crashed my computer. I'm gonna shoot whoever gave them my email, if I can find out who it is. And, boy, are those folks liberated... at least their mouths are... can anybody lend me a bar of soap? Better make that a train car load of the stuff. We're gonna need it. Oh crap... I used "shoot" in a sentence... now I'm going to be on watch lists for the CIA, NSA, FBI, and ATF. I'm already on the ceasefire.org, csgv.org, and bradycampaign.org lists as a gun nut. I'm really not, but some labels you just can't shake. And honestly, I don't really care. "Durn, tootin'," Duncan said, reading this last sentence, "let 'em come. I'm locked, cocked, and ready to rock." Yeah, you're not really helping here, Duncan.

Well, I guess I have two days worth of blogs for which I need to thank Adele Archer, but can you please help me put out the fire? I mean, seriously, I'll try to be good... I'll try to limit my sarcasm and be a kinder, gentler blogger. Oh  H E double hockey sticks... no I won't. I'd have to give up blogging.
Posted by S. Bradley Stoner at 1:51 PM