The Square Peg - A Moment of Seriousness

[Note: This is from a past blog I wrote, but it seems as relevant today as it did in 2008... perhaps more so in light of recent events and headlines. Don't worry... the less serious side will return soon... I just have too many "honey-dos" - those aren't melons... they're chores I've been putting off.] 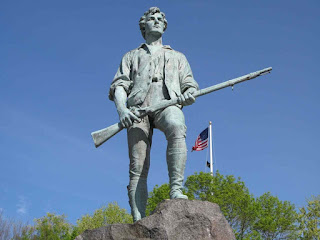 "We hold these truths to be self-evident, that all men are created equal, that they are endowed by their Creator with certain unalienable Rights, that among these are Life, Liberty and the pursuit of Happiness. — That to secure these rights, Governments are instituted among Men, deriving their just powers from the consent of the governed, — That whenever any Form of Government becomes destructive of these ends, it is the Right of the People to alter or to abolish it, and to institute new Government, laying its foundation on such principles and organizing its powers in such form, as to them shall seem most likely to effect their Safety and Happiness. Prudence, indeed, will dictate that Governments long established should not be changed for light and transient causes; and accordingly all experience hath shewn that mankind are more disposed to suffer, while evils are sufferable than to right themselves by abolishing the forms to which they are accustomed. But when a long train of abuses and usurpations, pursuing invariably the same Object evinces a design to reduce them under absolute Despotism, it is their right, it is their duty, to throw off such Government, and to provide new Guards for their future security."

Bold words from bold men about to birth a new nation and begin what has come to be known as "the great American Experiment."  Implicit in our forefathers words was a challenge to the people.  A challenge to stay informed, to stay involved, and to stay vigilant, for self-governance only works so long as the people remain in charge of it.  When people become lazy, when they allow others to think for them, when they become apathetic, it is then that what our forefathers built, what they shed their blood for becomes endangered.

I wonder what they would think, looking upon today's United States of America?  Would they see it as a successful experiment?  Somehow I think not... at least not in its entirety.  I think they would be appalled at the sheer size Code of Federal Regulations, for it was one of our founding fathers who opined that "he who governs least, governs best."  I suspect that their intent was to keep the federal reach to a bare minimum, to that only necessary to ensure a general uniformity, the security of the nation, the general public safety and equitable commerce (the concept of full faith and credit among the several states), with the remainder of rights reserved to the states.

Governments breed bureaucracies.  Like all bureaucracies, however, ours has grown as the nation has grown, responding, it would seem, to the demands of its people.  The more the people demand, the larger and more powerful become the bureaucracies, each department, each division becoming a crying, no, a demanding mouth that is silenced only by an infusion of money.  Our "institutions of government" have become filled with institutionalized bureaucrats whose purpose, at least at the management level, is to grow their program.  There are no incentives to cut spending - redirect it, perhaps, but not cut.

Every two and four years we, as a people, have the opportunity to make a choice.  We make that choice with a vote.  We have the opportunity to choose to be freer or to subject ourselves to more and more restrictions.  We have a choice between freedom and safety... not both.  Our government is reaching deeper and deeper into our lives and our pocketbooks.  They seek to govern our everyday choices in life, even legislating their vision of morality.  When the economy needs a stimulus, the government offers us a pittance... a mean sum which they intend to get back in the future.  Remember, the current stimulus package is a "temporary" fix.  In fact, it is no fix at all.  It is a manipulation during an election year.  The tax burden we bear would, I think, astonish our founders.  It is, in fact, far greater than those that sparked the war for independence.

This coming year we all have a choice.  I hope we make it in favor of freedom. We have an opportunity to send a message to career politicians and institutionalized bureaucrats.  Vote for the other guy... the one less known... the one who stands on principle... the one who honestly wants to get government off our backs and out of our lives.  We have the opportunity to shake up and wake up our government... but do we have the courage to do it?  Or do we want the safe life?  The life where someone else takes care of the things we don't want to deal with?  We have a choice and the fate and future of this country lies in our hands.  Speak now, or forever hold your peace.

Like I said this piece was written in 2008, seven full years ago. In that time, our national debt has skyrocketed, deficits have grown exponentially, Congress has passed laws they didn't even bother reading; we have lost even more security in terms of our personal freedoms; and we are allowing ourselves to be beguiled into believing that symbols are more important than substance by media that has become little more than a propaganda tool for the players on the political field.

To all the young people out there... the national debt is $18.3 trillion and growing by the minute... that is your debt... my generation won't live to pay it off.  And it isn't going away on its own. Think hard before you let the media and apathy take over and let others make your decisions for you.
Posted by S. Bradley Stoner at 12:50 PM