The Square Peg - Forget Politics - The Real Debate Is Here... 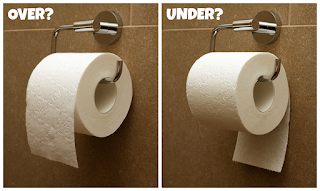 Politics once again is dominating the airwaves, newspapers, and social media. Frankly, I'm not sure it ever stops. It's the same old crap over and over again. And speaking of crap, I was doing some research and discovered that there has been a long standing debate over... you guessed it... toilet paper, aka crapper wrapper. Now, we here at the Square Peg thought it might be appropriate to conduct a poll to see which position of the roll on a hanger is more popular. Our poll, of course was not scientific, but really, which polls are?


Our poll was conducted on social media. Ever since the campaign of 2008 that seems to have been the norm for polls and getting the message out. Now, there is absolutely no doubt we could have stacked the deck on our poll by having people register multiple accounts on Facebook, Twitter, Instagram, Google+ and the like to achieve the results we wanted to see. Oh come on, it's not like that isn't done... ACORN set the bar on stacking the polling deck at least 8 years ago. But, we didn't do that.

Our objective was simple. We wanted to find out if "Over" was preferred over "Under" or vice versa. We could have included demographic questions to narrow down which groups preferred which methods... you know, like:

Your Occupation: 1) What? 2) Burger jock 3) Corporate lackey 4) None of your damn business;

Your Family Income: 1) Depends on appropriations levels
2) A pittance unless they raise the minimum wage
3) Comfortable
4) Are you from the IRS?
5) I just bought a small South American Country. 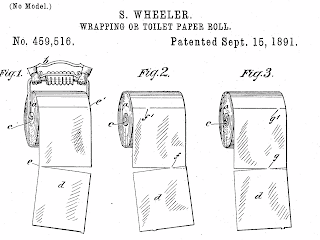 You know... stuff like that. But we weren't looking for any hidden, deeper meaning for our poll. Besides, tabulating complex responses is hard when you're three sheets to the wind and on a roll. Speaking of responses, we found them to be pretty evenly split and were torn between reporting and not reporting the results when Rona "Fifty Caliber" Barrett pointed out that it would be irresponsible to conduct a poll and not give an analysis of the results. Besides which, she said, we could simply set the record straight by publishing an illustration from the original patent. Yeah... that surprised me too... apparently some a$$hole is cleaning up on patent residuals.

In any case, we decided to scrutinize the results of our poll, but how to analyze results based on the only two possible answers - over or under? Good old "Fifty Cal." came up with the solution. She would simply go to the respondents social media sites and wander around in them to see what sorts of people they were based on their posts. Despite our email being inundated by Rona with pictures of kitties, dogs, llamas, and other such cuteness, Rona did make a discovery that could be significant in the coming couple of years.

It turns out that conservatives prefer the "Over" position, while liberals and progressives prefer the "Under" position... go figure. Armed with this extensively researched data and the huge response numbers (I think it was 20), we're pretty sure we can make some moolah selling our info to the media and political action committees. It'll be entertaining to see who craps out first in the coming year or so... but we all know who will get to wipe up the mess when it's all done.
Posted by S. Bradley Stoner at 9:25 AM