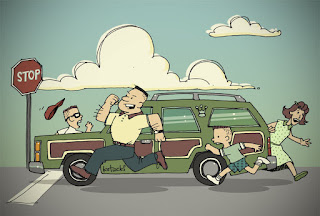 It's the last weekend of summer for most school-aged kids here in San Antonio. After an entire summer of indolence for most of them... you know, sleeping late, hours of X-Box, PlayStation, or just endless inane texting on the android or iPhone... there is a sudden burst of frenetic activity in the neighborhood. Kids have found their skateboards, bicycles, scooters, trampolines, and, uh-oh, cars. One of the latter came to a stop at the end of the block and six teenagers of various shapes, sizes, and sexes poured out, raced around the car, got back in and took off. Yep, that's the old Chinese Fire Drill all of us used to do back in the good old days. It seems to have undergone a resurgence. Or maybe it never went away and I just wasn't paying attention. Who knows?

Bingo Bob yelled something about kids these days that I can't repeat . I shook my head and yelled back, "They're just doing the old Chinese Fire Drill!"

That apparently pee-oed old Bob no end. He threw the end of his hose, nozzle going full bore, down on the ground, got thoroughly soaked before he could turn it off, and came stomping in my direction. Drawing near, he said, "You can't say things like that anymore... it's racist!"

"Geez, Bob, dial it back a notch. And anyway, it's not any more racist that saying 'gook Pho' and that isn't racist at all."

I proceeded to tell Bob that 'gook' in Vietnamese means 'good' according to my Vietnamese friends (I suppose they could be lying to me, but why would they... and I have a lot of Vietnamese friends). And in Korean it means 'soup' which is interesting, because Pho in Vietnamese is soup, usually chicken soup, but it can be any kind of broth-based soup, I suppose. If you were speaking a mishmash of Korean and Vietnamese, 'gook Pho' would mean 'soup soup,' which is kind of funny if you think about it. Any way, we were veering from the topic, and I didn't want to go down that road. "Why do you think 'Chinese Fire Drill is racist? Because some politically correct censor told you it was?"

Bob's jaw worked. He wasn't quite sure how to answer that, especially since he generally was the epitome of the redneck conservative. Is redneck racist? Or doesn't racism apply when talking pejoratively about good ole boys?

"Besides," I said, the term had its origins in World War one when British pilots talked about bad landings. The called them 'Chinese landings' because lousy pilots would land with one wing low."

"Wun Wing Low??" Bob stared at me. "Why would they have a Chinese guy flying with them?"

"One... as in the number one, Bob. It just meant that they came in with one wing lower than the other... not that they had a Chinese guy on board, for Pete's sake. But because it sounded like a Chinaman's name, they started calling it a Chinese Landing. Then, because they thought Chinese just looked confused in a crisis, milling around and such, the term 'Chinese Fire Drill' came about to describe a confused situation. And let's face it, when kids come to a stop at a stop sign or light, jump out of the car and run around like chickens with their heads cut off... well that just looks confusing. So if you have an issue with Chinese Fire Drill, take it up with the Brits... not me."

I could tell Bob wanted to continue the argument because he sort of sputtered like a dying lawn mower, but it was obvious he didn't know how to keep it going. "Damn kids! They keep doin' that, they're gonna cause an accident."

"On a residential street? Seriously, Bob?"

"Looks like you and me are in a Mexican stand off on this one..."

"That's racist, Bob." You had to know I was going to say it, right?