The Square Peg - No Need To Be Scared - It's Just Boo

The Square Peg - No Need To Be Scared - It's Just Boo
© S. Bradley Stoner 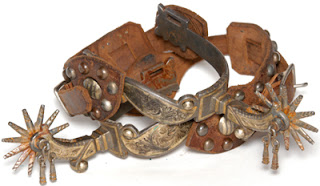 You can always tell when fall is approaching around here. It's the time of year my old friend Buford Beauregard Brickhouse III shows up for his biennial visit. Buford, or Boo as his friends call him, hails from the Bitterroot Valley in Montana where I spent some of the best years of my life. That's where I met Boo. Boo is your quintessential cowboy... or as he likes to say, "cowboo." Don't ask me why, it's just Boo's bucolic way.

Boo grew up on a horse... he was literally in the saddle before he could walk... and he is well schooled in the Montana three "Rs." For the uninitiated, those would be ridin', ropin' and 'ranglin. When we were both a lot younger, I discovered he was also well schooled in the three Montana "Ds." Dippin', dallyin', and drinkin', although you can only do two of those at a time without hog tying yourself to the saddle, which is definitely not a thing any self-respecting cowboy wants to do.

So Boo and I were standing out by his pickup... it was one of those big F-300 dually models, jet black with a big, gold B-B (that's B bar B for you eastern types who don't like westerns) emblazoned on the front driver and passenger doors. It's his personal ranch brand... registered since his great granddaddy, Buford Beauregard Brickhouse I, bought their ranch when he moved to the Bitterroot from Missouri. I once asked Boo how he could only be the "third" when his great granddaddy was the first. Boo explained that the old boy switched names on his son, naming him Beauregard Buford Brickhouse, so it skipped that generation. I digress.

Anyway, I'd noticed that Bingo Bob had been peering at us through a knothole in his cedar picket fence, but I didn't encourage him to come over. The problem is, old Bob doesn't need a whole lot of encouragement, and pretty soon I saw his backyard gate swing open and out he walked, raising a hand to wave at me. I waved back... I probably shouldn't have, but such discouraging things have no effect on Bob. Pretty soon he was right there beside us, checking out the Montana plates on the truck.

"You from Montana?" Bob asked.

Deadpan, Boo answered, "Nope. Stole the plates on my way here from Idaho."

Bob blinked, hesitated for about three seconds, and then laughed nervously. "A joke... ha ha, I get it."

"Who's jokin'?" Boo is like me, he likes to mess with people's heads just for the hell of it.

Bob swallowed hard. He could have just moved on, but he couldn't let go of it. Bob thinks he an investigator ever since he took that COP training... you know, sort of the neighborhood watchdog, which is code for just plain nosy in Bob's case. "You actually stole them? Why?"

Boo pushed his broad brimmed hat back on his head a little so he could get a better look at Bob. "On account of that rustler I plugged. Nobody would have cared about that, but his dog got a little contrary so I had to plug him too, and it seems the FBI has made that a federal offense. Didn't want to stick around and wait for them boys, so I took it on the lam."

"Well, I'm not too sure," Boo scratched his chin thoughtfully, "but I sure hope so. I wouldn't want that knobhead testifyin' against me." Boo turned to me, "Speakin' of dead, we oughtta get that cooler of meat into the freezer before it thaws."

I thought poor Bob was going to pass out. Instead he just staggered away, eyes glazing over. Boo's lips curved into a grin, "That feller ain't overly bright, is he?"

"Nope," I agreed, "the bulb in his porch light is a little dim sometimes. I think he spends too much time outside without a hat on. I'm pretty sure the sun is cooking his brain."

"Aw heck, he isn't even an honorary Texan yet... it takes New Jerseyites three years to attain honorary status, and I'm not sure we ever let them become full fledged Texans. Anyway, he's not that bad a guy," Did I really say that? Out loud? What if somebody heard? The consequences could be dire.

The phone rang just as we got inside with the cooler. It was Duncan Donutz on the phone. "What's up Duncan?"

"You gotta quit yankin' Bob's chain," he growled. "Every time you do something like that he calls me and wastes a good fifteen minutes of my time."

"Yeah, yeah... hey, you going to go fishing with Boo and me down on the coast?"

"Only if Bob isn't coming... I'd have to keep assuring him Boo isn't going to drop him in the drink and I just can't concentrate on my rig when he gets that way."

Behind me, Boo shouted, "Did you go and ask that flatfoot to come along?"