The Square Peg - An Oldie... My First, Last and Only Chicken Tuesday Blog


The Square Peg - An Oldie... My First, Last and Only Chicken Tuesday Blog
© S. Bradley Stoner

[While I'm busy writing other things, I'll be posting some oldies, Chicken Tuesday was started way back in the Yahoo 360 days by my wife and a few of her friends and carried forward through Multiply. Although originally intended for the exchange of recipes, it occasionally degenerated into silliness... usually because I got involved. So in honor of those halcyon days, here's one of my offerings. BTW, it was not my"Last and Only" appearance on the Chicken Tuesday exchange.] 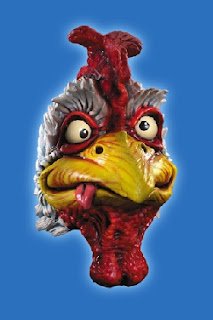 Well… I went out to the hen house this morning to check on all them mother-cluckers and make sure they were keepin’ busy with the egg makin’ and all. Well, wouldn’t you know it… they were all in a bawky mood… sorta on strike… wouldn’t lay a thing. Then they all started bantering at once. I’m tellin’ you, it was a genuine clustercluck.

So, I thought to myself, “Well, maybe they need a rooster.” So, I checked the rooster roster to see what the rotation was. Turns out it was the Banty’s turn. I was skeptical, but the little pecker, a brassy little strutter, crowed that he was locked, cocked and ready to rock. Yep… a real regular booster rooster.

Well, Ol’ Banty hit that yard like gangbusters… and danged if them hens didn’t just disappear inside that henhouse. I’ve seen it before, but I didn’t think they’d pullet this time… they were scarce as hen’s teeth, if ya know what I mean. Well, Ol’ Banty wasn’t havin’ any of it. He charged into that hen house right after them. Well, ya coulda heard the ruckus a mile away… there was a squawkin’ and bawkin’ like you never heard before. I’m telling’ ya, the feathers were flyin’.

Well, pretty soon, one of them biddies comes staggerin’ out of the hen house, wild-eyed and spraddle-legged like she’d just laid a double-yolker. One after another, the whole flockin’ bunch of them stumbled into that chicken yard… you could say they’d had their feathers ruffled a bit, but they seemed okay otherwise.

Well, Ol’ Banty finally staggers out of the henhouse, lookin’ like somethin’ the cat dragged in. His tail-feathers were droopin, his comb flopped over, his eyes dull. He just barely made it to the gate. Well, it was clear that he was pretty well done in, and me, figurin’ there’s no sense in wastin’ a good chicken, especially on a Tuesday, I did what I had to and that rooster is now bein’ barbequed.

Me? Well I took this to be one of life’s moral lessons… If yer feelin’ cocky, don’t go messin’ at a hen party, you’ll just wind up getting grilled.
Posted by S. Bradley Stoner at 1:52 PM