TREK WARRIOR - The Chronicles of Katlil 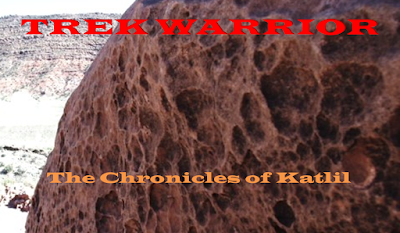 The air was dust dry and gritty. Katlil Noctus trudged the burnt, barren wasteland of what once was a lush rainforest. The twin suns of Santatum bore down on him like a pair of hungry eyes, staring out of the black ember of the empty sky. Puffs of gray-black ash rose into the stillness with every step he took, hanging there like tiny clouds to mark his slow progress across the Plain of Woe. For three days, perhaps more, he had walked thus, leaving behind the vestiges of the Hewonuk village he had known for the past sixteen months, resuming his quest for the Book of Asan, and the key to restoring the balance.

Of the last sixteen months, six had been spent waiting out the electrostorms that plagued the planet in winter and spring, two had been spent with Soroya, daughter of the headman, and eight had been spent in the wait. Vagdoom had refused to give Katlil permission to go until Soroya was with child and had passed the time when most women lost the child they had been carrying. Since the Cataclysm, virile and fit young men were at a premium, and Vagdoom meant to have his lineage continued.  A Trek Warrior was an ideal candidate, and Katlil was an ideal Trek Warrior. Soroya, though she bore the scar of Sharkael, was still comely, lithe, and intelligent. It was a good match that would bear handsome fruit. When, at the endtime, Soroya was past the loss time and nearing the final stages of pregnancy, Vagdoom finally acquiesced to the Katlil’s urgent and repeated requests to be allowed to continue his journey. It took him a scant three days to find his way out of the valley and onto the plain.

The Plain of Woe stretched more than two hundred miles in the first sub-equatorial zone. It was dotted by deadly hot pots, those remnants of the ancient skydarts that still simmered and burned molten rock. One had to be careful around these, for they extended beyond the visible melt, often for ten man-lengths or more, still seething under a thin crust that would not hold one such as Katlil. Katlil was wise in the Way, however, the result of many solar turns spent at the knee of the Great Bouran, last of the original Trek Warriors. It was Bouran who imparted the knowledge of the crossing of the Plain of Woe, the hazards of the Beguilers to the east, and the dangers of the pinnacles that barred the path to the great tower of Asan where the Book lay waiting for the worthy. Bouran’s nephew, Mothac, had taught him the use of the Trek Warriors weapons in long, arduous days of mock battle. But it was Katlil’s heritage, his familial lineage that separated him from other Trek Warriors. It was what gave him catlike reflexes, strength of sinew, sharpness of senses, and a keen intelligence that made him both a formidable foe and a bright student.

Katlil was steeped in the ancient religion and he wore the bracelet of Amunthor on his left wrist and the amulet of Tefnuthera on a chain around his neck. Each morning he made his obeisances to Amunthor, and each evening he offered two precious drops of water to Tefnuthera to ensure the safe passage of his journey and the success of his quest.  It was failure to honor the old ways and the Gods, Bouran had solemnly told him, that had sent the Ancestors on the downward spiral to the Cataclysm. In the enjoyment of the  bounty brought to them by the Gods, they had forgotten the Way, they had questioned the Gods, and they had indulged themselves in every way possible. The Cataclysm had been the Gods’ punishment for this. Only true believers had survived, true believers who had eschewed luxury and embraced the simpler life of the Way. Katlil didn’t know who first learned of the Book of Asan, nor for that matter did Bouran. No one knew. That had been lost to the ages. That it existed, no one doubted. The ancients had told of the secrets the book held to restore the balance... to return the rains to the lands and clear the skies of the dull gray dry-grit stirred from the parched land and carried far aloft, sometimes obscuring the twin suns.

This was the quest assigned to every Trek Warrior by Bouran. Bouran was the oldest of the Warrior sect, it’s current high priest and counselor. At one time, the old Trek Warrior had been a seeker, searching for the Book of Asan just as many of his brother warriors had. After more than six decades, he, and he alone, had returned from his journey, adding his journal to the Warrior’s Chronicles, building on the knowledge and maps of those who had gone and returned as far back as a decade after the Cataclysm. Now, in his hundred and twentieth year, it was he who judged the boys brought from the scattered villages either fit or unfit for the rigors of the sect. It was he who had chosen Katlil when he was but a child of six. Something in the eyes, those gray eyes that glinted with the fire of zeal ensured a special place for Katlil in Bouran’s inner circle of novices.

Now, having endured the merciless rigors of the sect’s doctrinal and brutal physical training, Katlil stood, a young man in his prime, at the precipice of this quest that would, in time, take him leagues from the temple of the Trek Warriors and into lands stranger and more dangerous that the Plain of Woe. And each night, by the light of the cube, he would carefully map each day’s journey, record each day’s events in his chronicle book, being careful to return it and the cube to the safety of its hiding place among his meager goods. He would protect it with his life, and if need be, return it to the Temple in the talons of the sky eagle that served as his eyes above. It would take but a telepath command.

For now, Katlil was content to focus his attention on the Plain of Woe. If the past chronicles were correct, it would take him ten more days to cross it. Traveling at night would have been easier were it not for the Gardons that prowled the night. These were armored beasts with scythes for claws and razor sharp fangs. Few men were a match for a single one, and Gardons hunted in packs. So Katlil suffered the glare of the merciless suns and moved hastily, but carefully from one rock shelter to the next... each one a day’s walk from the last. Each night he would gather the firestones that were scattered on the plain, pile them in a pyramidal pyre and set them ablaze. Each night he could see the ring of yellow-green eyes that prowled the perimeter of his tiny refuge.

To be continued... after a brief hiatus while I work on a non-fiction book.
Posted by S. Bradley Stoner at 2:01 PM