The Square Peg - Mother FDA - Or How Stupid Are We?

The Square Peg - Or How Stupid Are We? 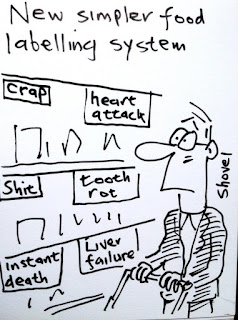 The FDA is at it again. Unable to think of anything substantive to justify their existence, not to mention the expenditure of taxpayer dollars, the FDA is spending millions on making up new rules for food labels. Are you kidding me? The old system wasn't good enough. The food manufacturers were lying to us about what an American's "typical serving size" is. Aha! It's the food companies who are making America fat. That's right! I said it. You are not responsible for making yourself fat... it's the food companies!

I guess we should have seen it coming. After all, wasn't it the FDA who told us Mickey D's was making us fat? I mean, it's not like you can choose to eat somewhere else, is it? No siree... it was those fast food chains catering to our uniquely American lifestyle... no time for lunch? Pick up a burger or fried chicken... and don't forget the fries or potatoes and gravy. Make mine a double. I'm hungry. Well, now the FDA is going to out all those nasty food companies contributing to our corpulence.

Truth in advertising. Isn't that kind of an oxymoron? Yep... a pint of ice cream isn't really four servings. It's two at the most. Shoot... if you put a quarter pint in your bowl, it just looks lonely. Like a little island in a sea of emptiness. Who wants that? So what's going to happen? Well they are going to require a complete revision of the serving size to reflect what you really cram down your craw. And for those folks who totally lack self control, they're going to make them include columns in the label for a "200% to 400% serving size. Same goes for cookies. Yep, they're going to scare you into keeping your paws off those Oreo, Sugar Wafer and Famous Amos goodies. Aren't they?

If that was it, I'd be okay with it, but it isn't. They're going to BOLD the serving size and calories because we are apparently unable to read anything in regular type. Either that, or they feel it necessary to hit us between their eyes with their social engineering. Then they're going to tell us the percent of the daily nutritional values contained in columns on the left... because presumably we are not capable of looking at them in the right hand column. On top of that  they feel it necessary to change the wording that currently describes the daily value percentage. It currently reads, “Percent Daily Values are based on a 2,000 calorie diet. Your daily values may be higher or lower depending on your calorie needs.” Once adopted, it will read, “The percent daily value (%DV) tells you how much a nutrient in a serving of food contributes to a daily diet. 2,000 calories a day is used for general nutrition advice.” What GS-11 thought that one up? And does it really tell you any more than the original. Not really, but then we're all morons to the FDA.

I wish it were restricted to the FDA, but it isn't. This micromanagement of our lives is creeping into every corner of our existence. It's enough to give you an anxiety attack, but fear not... the FDA has a solution for that. Give them the dough to do fifteen years of research and they'll okay a pill that will fix your anxiety... permanently. Oh it will probably also give you the third world quick trots, splitting headaches, cramps, hallucinations, possible thoughts of a suicidal or homicidal nature, and possibly result in death. Of course, they make sure they tell you all this on the label.

I think turn about is fair play, don't you? I say every bureaucrat, every member of Legislative, Executive and Judicial branches of government should come with a warning label. It should give percentage values for narcissism, egotism, obsession, manipulation, and control, with the balance made up of pure bullshit. At least then all of us morons would have some idea of what was actually in those packages.