The Square Peg - National Underwear Day - or Where are Otto Oldguy and Johnny Skidmark? 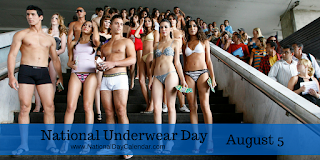 It's National Underwear Day again. Talk about your marketing schemes! I mean, who in their right mind is going to show up in public in their tighty whitey, far less their gray dingy? No one... don't be ridiculous. Nope... folks are going to run out and buy new underwear. And that's what it's all about. That and young, narcissistic hard bodies putting it out there for everybody to see. Heck, I have underwear older than some of those kids... but I wouldn't wear it in public unless it was covered up by a nice pair of pants with a good t-shirt on top.

I can see Victoria's Secret girls wanting to parade about, although I think there are some things Victoria should keep secret. Folks don't mind seeing shapely Sheila prancing about sans street clothing, but who wants to see saggy Shirley? Come on. And Joe Sixpack... yeah, the girls will drool over him, but most guys would cheerfully flatten him flatter than flat with a steamroller. You won't see Kevin Kegfront and Bobby Biggut out there. No siree... you only see them at the Redneck Mud Races, which, of course, is where they belong.

How many of you can pick out Otto Oldguy in those pictures? I can't. First off, Otto is at home staring at all the hard bodies on his TV... or taking a nap in the recliner where nobody really cares if he's just wearing his underwear. If he went out in public like that, somebody would call the cops to come "pick up that pervert." The high probability of incarceration keeps Otto inside unless he's fully dressed and walking the dog.

You won't see Johnny Skidmark out there either. First, his Mommy won't let him. She knows dirty Johnny too well. And second, well let's face it, anybody too lazy to keep himself clean is probably too lazy to get out from behind the gaming console to go outside in the first place. Frankly, from my perspective, that's a good thing.

Nope... this is about boosting sales, not to mention boosting boobs and butts. And it probably works... after all, who would be caught dead wearing last year's leopard print panties and bra in public? So just remember, while all you young hard bodies are out there stripping down, sagging Shirley at Victoria's Secret and Otto Oldguy at Calvin Klein are plumping up... their bank accounts.