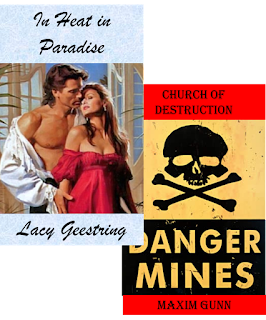 I'm working on a book. Several, in fact. I like putting words together in a meaningful form. I like creating images. I even like mixing my metaphors sometimes just to keep editors on their toes. A friend of mine told me that I would have to alter my approach if I REALLY wanted to get published in today's markets.

"Brad," she confided in me, "if you really want to make it, you have to go with the mass markets. Romances are the really hot item."

I thought about that. Maybe that was the way to go. I rushed out to my super market and bought one of them. It had a beautiful, scantily clad woman in the embrace of an extremely handsome, well-muscled man on the cover. The title was steamy and catchy. "In Heat In Paradise." This, I thought, ought to be a real page turner. Even the authoress's name was a turn on. I had serious doubts that it was real, however. After all who would name their darling daughter 'Lacy Geestring?'

I drooled with anticipation all the way home. I closed the door behind me and raced for my favorite chair, and opened the book. It took me exactly seventeen minutes, fourteen and three-tenths seconds to read it. I was disappointed. I called my friend . My friend was amazed to learn of my ability to speed read. It was nothing. If you simply discard all the pulsing, throbbing, heaving, passionate sweating and glistening, the oh yeses, darlings, sweethearts, my loves, the oh, oh, ohs, and the articles 'a' and 'the,' the entire book was only twenty four pages of plot and locale. The "fleshing out of the characters" was simply that... young, lithe, firm bodies with heaving breasts, firm buttocks, soft curves for the girls and rock hard abs, bulging biceps, chiseled features for the guys. I like young, firm, lithe bodies, but there was just too much of a good thing in that romance book.

"It just isn't for me," I told my friend. "I don't do throbbing, heaving, passionate young bodies with sustained fervor, my love."

My friend contemplated a moment. "I suggest you try for a fast-paced blockbuster then," she said. "Too bad you're not a cop or a priest, though."

The blockbuster took me forty five minutes, fifty four and nine-tenths seconds to finish. At least there was a plot and some characterization. But, boiled down, I'd have to say it fell more in line with a padded short story or novella than what I'd consider a serious literary effort. I called my friend back and told her about the blockbuster.

"You'll never be a great success," she said almost sadly. "You just don't seem to understand what the public wants. The eat this kind of thing up... they crave it. It's addictive."

There was a long pause at the other end of the line. My friend let out a prolonged sigh of resignation. "You'll have to adjust your attitude. These things are earthy. They're direct. People understand them." It was my turn to pause. I thought I did it rather well. It forced her to speak before I replied. "Well?! What are you going to do?!"

"I'm going to continue to write literature. If nobody wants to read it and nobody wants to publish it in today's market, well.... they can just stick it up their asterisk!"
Posted by S. Bradley Stoner at 10:39 AM