The Square Peg - The Leap Forward or Is Big Brother Really Watching? 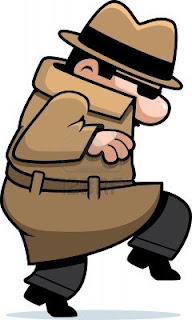 My last Square Peg column was written sometime around 1983... heavens to Betsy! That was 32 years ago. Where did the time go? Ah well, here we are in 2015 Anno Domini... call me old fashioned, but that just sounds better than Common Era or CE. For me, that’s just political correctness, and I don’t find anything particularly correct about that. In fact, I don’t find much correct about politics, but that is a topic for another time. But speaking of government stuff, much to my surprise and astonishment, Harold showed up here in San Antonio. You remember Harold... the self-same fellow who used to drive me nuts in Montana.

I almost didn’t recognize him. He’s put on a pound or thirty and he’s balding, but making up for it by growing facial hair. At least I think it’s hair. I was hoping he wouldn’t see me looking out the slat of the window blind. Luck was not a lady... Harold poked a finger at me, mouthed, “I see you in there,” and rang the doorbell again. “C’mon man, let me in!”

I didn’t want to. I mean, I really didn’t want to! I had been Harold-free for the better part of three decades, and I had no clue how on earth he found me. I paused. He banged on the door. I finally relented and opened the door a crack. “What do you want?”

“I’m with the NSA now,” Harold intoned in his most serious voice.

I blinked and thought, ‘If you’re with the NSA, I’m Homer freaking Simpson.’

“We have a few questions for you,” he added. “We need a few moments of your time.”

“It’s how we at the organization refer to ourselves. We’re never really alone, you know.” He wedged his hand through the crack. It held a card.

I took it. I looked at it. Sure enough, there was Harold’s name emblazoned across it with the words ‘Field Director’ right below it. There was a telephone number and an official looking seal on the card, but no address. I shook my head. That made some sense... not putting the address on the card. It was kind of like the government removing the on-line agency phone books. Terrorist threats and all that. I remembered back to when the military changed their system from “ThreatCon” (Threat Condition) to ‘FPCON’ (Force Protection Condition). Right now, I was at FPCON Charlie... because Harold presented an imminent threat to my security. If I got to Delta... well that would be it... it would be all over.

Harold wedged a foot in the door so I couldn’t close it. “Look, you can let me in now, or I can come back with a piece of paper later...” My threat level jumped to Delta.

“What does the NSA want with me? I’ve been retired for a few years now. Am I stockpiling too much weed and feed or something?” I asked just a tad defensively.

“Nothing like that,” Harold said in a conciliatory tone. “This is just routine... nothing at all to be worried about.”

Now, I’d worked with the government long enough to know that ‘routine’ and ‘nothing to be worried about’ were trigger words that meant you were about to be interrogated and had plenty to worry about. I had visions of Guantanamo Bay and water boarding, bright lights, lousy music blaring and no sleep. NSA... those guys weren’t constrained from operating domestically like the Company was. I started to wonder if they had bugged my place. I figured they were tracking my every move on Facebook and Google. My Twitter account would be virtually worthless to them... I almost never used it. But the others... I started to think about all the “likes” and “Google +s I had logged. Some of them were pretty conservative, after all, I am a strict constructionist when it comes to Constitutional matters, but I’m pretty open-minded when it comes to other things.

“Do I gotta go get that paper, or can we have a nice little chat now?” Harold growled. He apparently was put off by the time my ruminations took.

Personally, I thought those little tidbits had passed through my neural network at lightning speed. I opened the door just a bit more. That was enough for Harold. He wedged his shoulder in there and then bulled the door open, making for the nearest chair by the coffee table. He had that iPad up and running in no time. “You got Wi-Fi here?”

I looked at him. This was starting to stink like Harold schemes of old. “Use your own code.”

That caught him by surprise. “Wha...?” His eyes got that old deer-in-the-headlights look I remembered so well.

The screen on his iPad was glowing. It had the same seal on the log in page, but I noticed the fine print below it. I couldn’t get my bifocals to adjust to the print, so I just reached out and grabbed the iPad out of his hands.

“Hey!” he screamed, panic setting in.

I read the fine print. This tablet property of the Neighborhood Survey Association. I gave Harold a hard stare. “Ya know, Harold, this is Texas. And you sort of barged into my house... I really didn’t give you permission... and I have a pretty big pistol..,”

It was all the encouragement he needed. He grabbed the iPad back, almost broke his neck getting out of the door, and slammed it behind him. I think I heard him whine something about needing the job as he ran down the sidewalk.
Posted by S. Bradley Stoner at 8:21 AM