Oh the Joys of Texas In a Wet Year - Or, Why Are There Critters Hiding in My Grill? 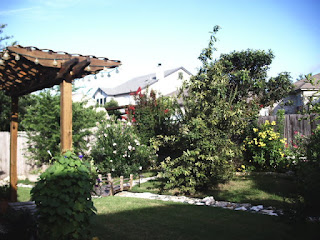 It has rained in south central Texas this year. A lot. We've had close to 24 inches of the stuff in San Antonio since January. That's only 8 inches shy of our normal average annual rainfall. And it's only June. And there's more on the way this Saturday and Sunday. Long term predictions say it's going to continue to be wet through the rest of the year. El niño has come to visit. To date, the little boy has delivered some 30 trillion gallons of water to Texas... that's right folks... 30 TRILLION with a big old capital T gallons. Don't get me wrong, I'm not complaining. We needed it to break a five-year drought and fill our empty lakes and aquifers. 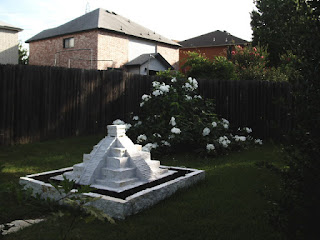 But man... my yard is starting to look like a Yucatan jungle. My carefully conceived landscaping is running rampant and critters are starting to take up residence. More about that later. This is what my back yard looks like today. Upper left is looking west. Lower right, looking east. It did not look like that to start with. When we bought the place four years ago, there was nothing in the back yard and only a few rose bushes in the front with a hedge next to the living room window. Other than that, nada. For comparison, below is a picture of the back yard when we moved in. 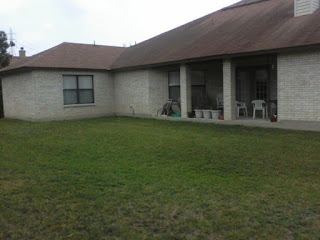 Told ya. Nothin'. Bare except for a drought-stricken lawn that had as many weeds as it had grass. I don't like a nothing back yard... or a front one for that matter. I sat down at my drafting table. I drew up a landscaping plan. In the central depression, where we discovered during the one hard rain event we had that year, runoff raced through our yard and flooded into the neighbors. I knew how to fix that. French drain disguised as a dry creek bed. And that rectangular back yard needed breaking up, so a graceful curving flower bed entered my design. No shade? No problem. A couple of trees would fix that, so into the drawing went Crape Myrtles along the fence and a nice Monterrey Oak between the flower bed and the creek bed. Oh and a garden bridge. If you have a dry creek bed, you need a bridge or it just doesn't look right. I was about done with the plan when my lovely came in and told me she had found the neatest bush at the local farmers market and I just had to go see it with her. We brought home a morning glory bush... from the Yucatan. Of course now we needed a Mayan pyramid to complement the theme. One of those went into the design. A couple of shrubs to break up the angular lines between the back porch and the office extension was penciled in and then I got to work. Somewhere along the line, somebody decided a stone patio extension with a pergola-style arbor would enhance our "outdoor living area." And of course that bare space to the side of the porch just wouldn't look right without a matching pergola-style potting shed. I gotta quit watching Yard Crashers.

I went to work. Who knew when I started the project I'd be buying some 6 tons of limestone building stone? Or 3 yards of sand and gravel? Or making trips to the Hill Country to collect rocks for the creek bed? Or... Oh, I could go on, but as they say, a picture is worth a thousand words.. I presume a few pictures can only enhance that, so here they are. 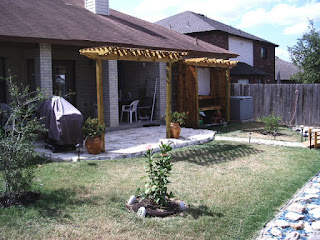 Ahhh.... that's better. A place to barbeque. A place to pot new plants. Bushes that will eventually provide a little shade and as a bonus, provide a place for birds to perch and hummingbirds to feed. This was really starting to come together. It was starting to be our little haven. In time, our shrubs and trees would give us some privacy in a neighborhood where space seems to be at a premium. I like neighbors... just not quite this close. Oh well, you can't have everything I guess. 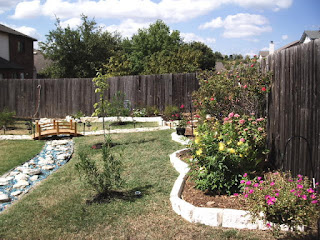 My lovely thought the creek bed looked a bit drab, so she bought some blue glass stones at the dollar store and scattered a few among the rocks. We bought more... in fact we bought all they had in the store before the clerk told us we could order them on-line... by the case.. at a discount. Now our dry creek bed looks like it has water in it. That first year, it confused the heck out of the birds. They'd apparently never seen "hard" water like this. The Grackles started taking out stones and putting them in the grass next to the creek. I'm still not sure whether that was a protest or they had their own ideas about landscaping.

Enough history... but that sure looked nice, didn't it? Growing things don't stay neat. They tend to try to fill the space in which they are planted. They grow... and during a wet year they grow a lot. My Monterrey Oak is over fifteen feet tall. The volunteer trees (I'm pretty sure they were volunteered by the local squirrel), a Red Oak and an I don't know what it is tree, are about 12 and 15 feet tall respectively. My Oleanders are taking over the far side of the creek and hiding my flower garden. The Crape Myrtles are not only hiding the neighbors, they are making it impossible to see that lovely Bougainvillea that is crawling on the back fence. I cut my grass three days ago... now it's five inches tall. I'm supporting OPEC with my gas lawn mower.

And critters? I don't mind the birds that flock to my fountains and feed on the nectar of my sage and firecracker. I don't mind the bees and wasps that get high on the Morning Glory pollen (hey, even the Africanized bees are mellow after making a visit to that bush). I like the bunnies that show up now and again. There's an Opossum that thinks our back fence is his personal highway. Luckily the skunk that shows up now and again hasn't fumigated my back yard. But that brings us to the Raccoons.

They started showing up this spring. One decided the insulation on my central air conditioning pipes might make a tasty snack. I reinstalled the insulation twice, but I got smart after the second time. I put hot sauce on the insulation. They haven't bothered it since. Apparently cayenne pepper is not on their menu. Then they fished the pump out of the little fountain on my porch and chewed up the connection for the internal hose. Apparently hard plastic IS on their menu. Cayenne pepper fixed that too... along with a replacement pump.

But last night was the absolute topper. We had gone out to enjoy the night... look at the stars in the sky that was remarkably clear for the first time in weeks. Then we sat down at the table. A scrabbling noise came from the vicinity of my grill. Not the new six-burner power grill that my son bought me for my birthday-Father's Day-Christmas gift... but my trusty old two burner Char-Broil that is in semi-retirement until I can find it a new home. I keep them both covered with heavy-duty grill covers to keep out the weather. It doesn't keep out raccoons. I moved the big grill. A moderate sized raccoon shot out from under the skirt of the cover and took off across the yard. She was followed by a smallish one... obviously her baby. Ahh, I thought, that takes care of it. Wrong.

I had just resumed my seat when more noises emanated from yon grill. I walked over to it. More noises, then silence. I started to lift the canvas cover, Silence. I pulled one end off. There, staring back at me were three little masked faces. For a moment they froze... and so did I. After all we were less than a foot apart and my fingers were woefully close to their sharp little incisors. Talking usually calms critters... at least it does when I talk to them, And for just a moment it did. Then the two furthest from me made a break for freedom, clambering down the grill inside the skirt and darting into the yard where Mama Raccoon had been a moment ago with their little brother. The last one got stuck in the folds of cover. At least he thought he did. He looked at me, probably scared out of his wits. I assured him I meant no harm, and gently nudged his little butt, with the cover between my hand and his butt of course. He slooowly made his way out. He left the porch, tiptoed across the patio, and out to the yard... the wrong way. I hope he found his Mama... and I wonder if they will be back tonight.