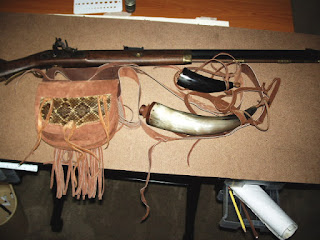 It was Wednesday afternoon. A dreary day in San Antonio. Grey clouds were blowing in off the gulf and starting to stack up, but it wasn’t raining ... yet. I wanted to mow the lawn and trim my shrubs, but the grass was wet and the shrubs in bloom. My lovely would have pitched a fit if I bobbed her blooms. I’d been writing since the crack of 7:30 and my poor old eyes were turning the letters on the screen to merge-mush. I needed a break.

I wandered out to the kitchen and got a cup of coffee, wondering what trouble I could get into that didn’t involve the alphabet. Then I thought about my shootin’ irons. I hadn’t blown off any steam in a dog’s age. 'Why not?' I thought. There was a shooting range just a few miles away and since it was midweek, it wasn’t likely to be crowded. I wandered back into my office and studied the rack of rifles and shotguns. Yes, I said them in the plural. I’m a Texan... and before that I was a Montanan and before that a Coloradoan. Having things that go “bang” is native to all those cultures... except maybe Colorado now. Colorado is kind of going up in smoke.. the kind that gives folks the munchies. You don’t do much shooting when you are mellowed out and are busy stuffing your face. I know this from close observation, not first hand experience.

That Lyman Plains rifle and the Hawken looked pretty inviting. Besides, my black powder was aging on the closet shelf. That stuff goes bad if it sits too long. Can’t have that, now can we? And then there was my .44 caliber Navy Colt replica... also black powder, but while the Lyman and Hawken are flintlocks, the Colt is a cap and ball pistol. Yeah, that sounded like a good combination. I checked my possibles bag to make sure I had enough patches, .50 caliber balls for the rifles and .44 caliber balls for the Colt. Then I picked it up... lead is heavy and I had 100 rounds of pistol and 50 rounds of rifle balls in there plus my powder flask, ball starter and sundry other necessities. Good thing that bag is made of heavy leather and has a nice wide shoulder strap. I filled my antique powder horn with about a pound of FFFG powder, pulled on my boots, and headed out alone. My neighbors Bingo Bob, Dudley Do-Little, Mechanical Marv, and Duncan Donutz were all otherwise occupied. Besides, the only one who would have gone shooting with me was Duncan, the retired cop.

When I got to the range, it wasn’t quite as empty as I had expected. The parking lot was jammed with Ford F-350s and  Dodge Rams with humongous hemis, but there were surprisingly few shooters and there were still a bunch of open stations, so I marched up to the office to pay my fee. The clerk kind of eyed me funny, but didn’t say anything. He offered me a pair of hearing protectors, but I had my own. Weapons, ammo and target in hand, I wandered to my assigned shooting station amid the comments and catcalls from an obviously younger generation that had more money and time than most people do. There were only two shooters. The rest were just hanging out watching them.

“Nice camo, sonny,” I called back. I'd have said something with a bit more bite, but my guns weren't loaded and I think his was.

Howie Howitzer, the guy in the station next to mine, sat polishing the .50 cal cartridges for his Model 82A1 Barrett semi-auto. I’ve got to admit, that thing’s a beast. My Hawken .50 cal looked kind of puny in comparison. Howie just eyeballed me, shook his head and finished filling that over-sized magazine with those gigantic shells as I laid my prize possessions out on the shooting bench.

Now, the thing you have to understand is that you just don’t cram a cartridge in a muzzle loader and go... there’s a whole process to getting it ready to fire. A really good black powder shooter can load and fire about three rounds a minute. I’m more like three minutes a round. It doesn’t bother me, I have the time. I’m retired.

I suffered the hoots and giggles from the peanut gallery of the idle youth as I poured a measure of powder down the muzzle of the Hawken, positioned a patch and round ball on the bore, set it part way in with my bullet starter, before using my handmade, antler handled, razor sharp, patch knife to trim the excess patch material. Then I finished setting the ball, removed the ramrod from its brass rings and drove it home with a single power stroke. You don’t tamp the bullet like they do in the movies... that just flattens the ball and makes it fly funny. Then I half cocked the hammer, pushed back the frizzen, and primed the pan with a small amount of powder. Once the frizzen was closed, I was ready to fire. All I had to do was bring the hammer to full cock, shoulder the weapon, sight down the barrel, depress the set trigger, and caress the hair trigger in front of it.

As I sighted down the barrel, the kid with Billy Bushmaster yelled, “Can ya see the target, Gramps?”

Sometimes I hate kids. But, I ignored him, felt the hammer fall, the flint strike the frizzen and, after a split second pssst as the primer powder burned to the chamber, there was a big bang and that big, old round ball was sent downrange. Man, that blast is loud... and it belches a mixture of glowing power fragments and thick gray-black smoke out of the end of the muzzle. The station is perfect for me... all the smoke blows toward Howie and Billy. The giggles stop when the coughing starts. I draw a little satisfaction from that. Howie takes advantage of the lull to send a magazine of .50 cals downrange, the shock waves rattling my insides, and then he grins at me evilly.

“Nice shootin’,” I yell at him, but he shakes his head and mouths, “What?” At least I think he mouthed it. I’m not hearing so well after all that, so I shrug and give him the thumbs up. Howie gives me a one digit salute... and it isn’t his thumb.

For the next round, I loaded all of my weapons, the Hawken, the Lyman, and the Colt. Laying each one carefully on the bench before me. It took me ten minutes of progressive deafness to get the chore done while Howie went through two more magazines. Taking a deep breath, I pick up the Hawken. cock, aim and fire, then the Lyman, then the Colt. I rapid fire the Colt. Ear muffs or no, I’m pretty sure I'm going deaf. The shooting at the adjacent benches has stopped... all that smoke has made it impossible to for anybody to see the targets.

Through the haze, I notice Howie Howitzer and Billy Bushmaster are packing up. The both glare at me with bloodshot eyes. Black powder smoke is kind of hard on eyes. Then I notice the range master striding purposefully toward me with a bandana pressed to his nose and mouth. Apparently I had broken some rule when I fanned the colt. Apparently that’s a no-no. The range master invited me to leave. I told him I wasn’t ready. He told me I was. I told him I wanted my range fee back then. He told me it would be a cold day in hell. I smiled at him and told him I’d wait... I had all the time in the world...after all, I’m retired.
Posted by S. Bradley Stoner at 9:28 AM