The Square Peg - Winter... or Confessions of a Red Neck Dinker 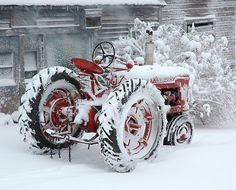 I like winter. Ski bums, ice fishermen, and snowmobilers like winter too, but I don't fit into any of those classifications. I found out a long time ago that skiing was not for me. The lodge is okay, but the slopes are downright dangerous. Snow on ski slopes is not soft and fluffy. It hurts when you can't stay in an upright position. And I can't. Ice fishing is okay too, if you don't mind the cold, the work, and the smell. Snowmobiling... well, let's just say I haven't gone that far around the bend... yet.

No, I like winter because I'm a dinker. Some say a red neck dinker. For those of you who don't know what a red neck is, I suggest you Google it... I'm not going to to tell you. For those of you who don't know what a dinker is, let me explain. In spring when all of my animals are finding out how they can make big holes in my fence, I dink around with posts and woven wire. In summer, usually because something on my old tractor has gone bad, I plug in the two twenty and dink with my welder. Sometimes I dink around with the mistakes left over from fixing the tractor to make metal sculptures. I call them art. Emily calls them junk. Summer is also a great time for dinking around with wood working projects. You'd be amazed at what can be made from wood. You'd be more amazed with what can't. Finally, summer is the best time of the year to work on that "classic" that sits up on cinder blocks out back. Emily doesn't understand the value of a classic automobile. She wants to know when I'm "going to get that old eyesore of a junker out of here."

Then comes fall. I used to like the fall. Crisp mornings, changing leaves, a touch of woodsmoke in the air. I'm not so sure anymore. Fall means shorter days. It's God's way of telling a dinker to quit dinking around and get the mess that's accumulated from all those summer projects cleaned up, and then laughing at you when you don't have the time to do it. I mean, by the time the Broncos have defeated the Raiders and Seattle is at half time, there are only a couple hours of daylight left... which would be okay, but dinkers have this irresistible urge to see what happens to Seattle during the second half.

Ah, but then winter comes. You have no idea how comforting this is to a dinker. Especially when that first snow flies. I can put Emily off when the first hard freeze comes. "Look Emily, I tried, but that pipe is stuck to the ground." Or, "Geez, I sure would like to get that burned, but there's an inversion. The county won't issue me a burn permit." If I hold her off for two or three weeks, I've got it made. Snow. A dinker's idea of the perfect heaven. Projecting pieces of pipe get little white caps on their ends. It does to that pile of metal mistakes the dinker welded together what he never could... it makes it beautiful. It makes Emily forget about them for the entire season. Now all she thinks about is see for the bird feeder I made her last summer. I watch her now as she lovingly fills it for the chickadees. She turns and looks at me with shining eyes. "I don't suppose," she chirps sweetly, "that you ever cleaned up the mess you made when you built this thing?"
Posted by S. Bradley Stoner at 8:24 AM