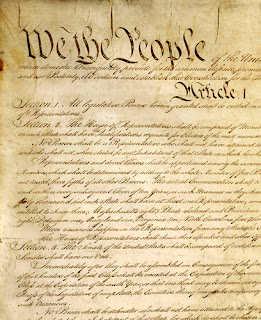 It was Thursday afternoon. I was bored. I didn't have a thing to do that night. Everything on the tube was being recycled. I longed for something different. I looked in the local paper in the "Events" section. I'd been to the art shows. I'd been to the craft shows. I had no intention of seeing the return of Jason in Friday the Thirteenth part ninety none, and I don't do needlepoint, bridge, or pinochle. When I saw the announcement for a meeting of the Constitutional Study Group, I thought, "Wow! This is for me." I had visions of lawyers, university professors, and jurists conducting a panel discussion on the fine points of government. Boy, was I in for a surprise.

I should have known better. The meeting was being held at the Joseph McCarthy Building on South Cracker Street. No identification was required, but you had to produce a gun of at least .30 caliber to gain admission. I presumed that this was because the Second Amendment was on the agenda. The First Amendment was also going to be discussed. At least I was prepared. I wore my quick draw holster with the .45 in it, and I always have my big mouth with me. Unfortunately, I also carried my notepad and a pen.

A diminutive man stopped me at the door. He limped and was stooped. Small wonder. The cannon on his hip outweighed him and that string of grenades must have put a terrible strain on his back. "Whatcha need them papers fer?!" he demanded,

"I'm a writer," I replied. "I need them for notes... First Amendment and all, you know. He asked for whom I wrote, only the way he put it, it had no "m" in whom and he ended the question with a preposition. I had a feeling my safety might depend on my answer. "The New American Reactionary," I stated firmly. "We print in red, white and blue ink."

He eyed me suspiciously and then waved me through, muttering, "I ain't never heard of it, but it sounds okay."

I found a seat next to an attractive red head who was packing the cutest pearl handled pea shooter I've ever seen. "Nice piece," I said, looking her over.

"Watch it buster!" she said, tapping her pistol. "I know how to use this thing." The sweet granny next to her was knitting a gun case for her sawed off twelve gauge.

The meeting was brought to order by a bearded apparition who used his nine millimeter for a gavel. Nobody seemed mind the blast, the smoke, or the new hole in the wall behind the dais. I sat quietly while the guest speaker explained our sacred right to bear arms and the sixteen ways to convert a hunting rifle to an automatic assault weapon. I said nothing when he gave instructions for building a tank. I put a plug in it when he explained that our guns were the only thing that stood between us and war with the (yet to be defined) enemy and the twenty ways our guns could be used to keep the peace.

But when the second speaker stood up and started exercising his freedom of speech to instruct us on the evils of the press, I could no longer contain myself. "Hey," I shouted out, "the First Amendment specifically grants freedom of the press." I was about to explain that, as a strict Constitutionalist, I didn't appreciate anyone suggesting the Bill of Rights should be infringed. I didn't get the chance.

The response came from all over the room. "Sit down and shut up! Who wants to hear from you?!" and "What is that? A pinko commie line? Put a gag in it Rooskie lover." I was sorely tempted to point out that freedom of the press was the thing that distinguished us from totalitarian governments, but I could see that constructive dissent had no place here. I sat down.

While some erudite man was expounding on the "commie maggots" in Congress, the cute red head took pity on me. She petted my pistol. She poked me with her pea shooter. She whispered to me about the cartridge loops on her bra straps. She showed me the little holster on her garter. She invited me to inspect her bomb shelter. Her brother sat on my other side tickling my ear with a howitzer.

I don't remember much after that. Dr. Skullpeeker says I snapped. All I know is that when I hear a gun go off, I see red, run to the basement, and babble incoherently about commies, bare arms, and topless bomb shelters.