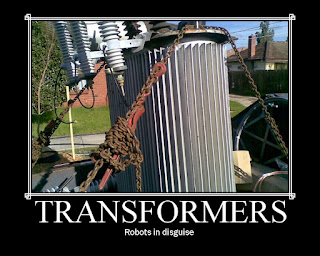 I was pleased when I found out my nephew was interested in science. I got my degree in biology. I think science is very important. Look at all the things science has done for us. Without it, where would modern society be? I was, therefore, extremely pleased when he asked me to come help him with his project.

When I got to my brother's house, the boy took me to his father's basement workshop. I don't know what I expected, but whatever it was, it wasn't what I found. In the middle of the room stood this enormous thing. It looked like a cross between a Saturn V rocket and a '58 Chevy.

"A transformer," he replied.

I thought of Edison. I thought of toy trains. "Neat," I said, but I think it's a bit large. You could regulate a power station with this baby."

The boy looked at me blankly. "Huh?" he said.

I became suspicious. I wasn't sure we were on the same wavelength. Maybe "transformer" had a new meaning in today's high-tech world. "Maybe you'd better explain," I suggested.

"Like a spaceship with Henry Ford overtones," I responded.

He grinned again and said, "Watch this!"

He pushed a button on the small panel in the front. Something like a head appeared from within the nose cone. It had red eyes that blinked. It had a mouth that looked like a Rolls Royce grill. It had a whip antenna and a little hoop that kept rotating every time the eyes blinked. He pushed another button. The tail fins unfolded and pushed the entire structure toward the ceiling.

I was astounded. It looked just like some of the robots you read about in futuristic science fiction stories. I was impressed. "Wow! What a neat toy," I said. "There wasn't anything like this around when I was a kid."

The robots head swiveled and blinked at me. Its little hoop was spinning furiously. It started to raise a mechanical arm. "Calm down, Vortex," my nephew said. The arm dropped. The hoop slowed. The taillight eyes quit flashing.

When I quit shaking, I squeaked, "Vortex?"

My nephew's face grew serious. He had my attention. I listened closely. I had to. When my nephew gets excited or serious, his speech becomes holophrastic. "Vortex-is-a-VOX-controlled-mini-mainframe-artificial -intelligence-inertially-guided-thermofustion-powered-antichild-abuse-device," he said in a single breath without pausing between words.

I stared at him, trying to decipher this high-tech gobbledegook. "Huh?" I said.

He looked at me sadly and shook his head. "Don't you watch Saturday cartoons?" he asked.

"It follows me around and beats up guys who pick on me."
Posted by S. Bradley Stoner at 1:52 PM