This ‘Tag Blog’ is my continuation of Jeremy Crow’s first part of Shadows Fall. http://creativitywhacko.blogspot.com/2015/06/shadows-fall-tag-blog-part-01.html and Richard Stevens second part of Shadows Fall http://www.richvens.co.uk/blogs---what-do-you-think/shadows-fall-a-tag-blog-part-02 . When you have finished reading this part and feel you would like to write the fourth part, you will find the instructions at the end. 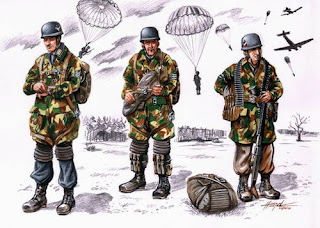 Rebecca padded quietly down the second floor hallway of the apartment building on Eisenbahnstraße in the Kreuzberg district, Berlin. This was the third apartment she had rented in the district in a little over two years. Her “business” required that she never stay in one location more than 9 months... and even that was a stretch. Her ears were alert for any tell-tale noise that she might have been followed, and although she had noticed no tails on the way home, one could never be absolutely certain. As she retrieved her keys from the small purse, her fingers traced the checkering on the Walther PPK automatic. It was a small .32 caliber weapon, but it was deadly in the hands of an expert. Rebecca was an expert.

As quietly as possible, Rebecca slid the key into the lock and turned it slowly, undoing the deadbolt, then inserted it into the door lock with equal care. She had been careful to apply an ample amount of graphite to the old pin hinges so the ancient hardwood door would open without the tell-tale squeak so common to the other apartments. Her entry into the apartment went unnoticed by her neighbors. She removed the oversize sunglasses and head scarf, tossing them on the hall tree bench, before removing the Walther from her purse and securing it in the drawer of the adjacent small bureau. She crossed the living room silently, almost like a shadow, and rapped twice on the door to the study.

“Mir geht es gut, danke... let us speak English, Becca, shall we?” The Doctor’s English was impeccable. It should be. He had studied at Cambridge for four years before the war and he was related to the Royal family.

“Very well, Doctor. I was unable to find what those two grave robbers were after. I did find out that they made it back to London. I had hoped we would have halved their number, but the bolt went wide and only caused a wound. The younger brother will recover.”

“A missed opportunity. Ah well, there will be other chances, but we must not let our guard down.”

Rebecca nodded. “Has the machine been repaired?”

“We are working on it, but parts are becoming hard to get. Too many questions when we go to outside sources to have them made, so we shall have to fabricate them in our shop in Dusseldorf. That will take time. Have you heard from Hans since returning from Crete?”

“No. It has me worried. He mentioned that a Shadow Hunter from Tel Aviv may be on his trail. He wants to make sure he has lost him before reporting in.”

“Better he should dispatch him... but quietly. We don’t want to bring more down on us.”

“It will have to wait. I have no way of contacting him. He has gone completely under for now.”

“Things are getting complicated, hey? Not like the old days. So many enemies now... so many seeking... Shadow Hunters, MI6, CIA, and who knows what others.”

“The machine must be fixed... and soon! Until then you remain in peril.”

“Inconsequential,” the old Doctor replied. “While they think they want me, what they really want is the machine. It must be protected at all costs. You must see to that.”

“But I don’t even know where it is at this moment,” Rebecca protested.

Herr Doctor picked up the title page of the document he was working on. “Geschichte der Fallschirmjäger” (The History of the Paratroops). It was a labor of love... rife with the memories of great deeds and fallen comrades. It was to these brave souls he dedicated the book. On the second page were inscribed the Ten Commandments of the German Paratroops.

1.      You are the chosen ones of the German Army. You shall seek combat and train yourselves to endure any manner of test. To you, battle shall be the fulfillment.
2.      Cultivate true comradeship, for by the aid of your comrades you will conquer or die.
3.      Beware of talking. Be not corruptible. Men act while women chatter. Chatter may bring you to the grave.
4.      Be calm and prudent, strong and resolute. Valour and enthusiasm of an offensive spirit will cause you to prevail in the attack.
5.      The most precious thing in the presence of the foe is ammunition. He who shoots uselessly, merely to comfort himself, is a man of straw who merits not the title of Fallschirmjäger.
6.      Never surrender; to you death or victory must be a point of honour.
7.      You can triumph only if your weapons are good. See to it that you submit yourself to this law - first thy weapon, then thyself.
8.      You must grasp the full purpose of every enterprise, so that if your leader is killed you can fulfill it.
9.      Against an open foe, fight with chivalry, but to a guerrilla, extend no quarter.
10.  Keep your eyes wide open. Tune yourself to the utmost pitch. Be nimble as a greyhound, tough as leather, hard as Krupp steel. You shall be the German warrior incarnate.

von Schumann had changed since those bloody days to be sure. He was older... much older, but looked nearer to his fifties than a man of 98. He was still fit and could outwalk those a third his age. Other men his age thought it remarkable... even found it hard to believe. von Schumann did not. It was the machine at work. But unless the machine could be repaired, and soon, all that would be undone. He made a mental note to check with Heinrich in the morning. Surely the part had been completed by now. More than a week had passed since he had provided the design for the part. Perhaps it was the difficulty in obtaining enough Vanadium - Gallium (V3Ga) for the superconductor. If so, von Schumann would use his contacts to make sure it got to the shop.

He sighed and returned to the writing. Rebecca brought the tea, left it, and slipped out of the room. She knew the rules. Never disturb Herr Doktor when he was writing. That he did not even acknowledge the tea did not surprise her at all.

Over 2,000 km away, Yossi ben Avrim wiped the sweat from his brow in the sweltering Ankara hotel. He was angry. Angry with the German, but more angry with himself. He had trailed the Kraut from Crete to Turkey, only to lose him on the busy backstreets of the market. He should have brought another Shadow Hunter with him, but they were stretched so thin and Yossi was sure of himself. Too sure, it turned out. He hadn’t thought it possible for the German to give him the slip. But here he was, sweating like a pig in a broken down hotel with no clue as to where his quarry had gone.

Yossi thought back over the events of the past two days. He had trailed the German to that God forsaken cemetery in Crete. The two Brits had literally screwed up his operation, making it impossible for his to approach the German from the blind side. Then he had seen the weapon, silent and deadly. He watched from a distance as the bolt left the crossbow, heard the thud as it found its mark, heard the muffled curse of the victim, and then the quiet, but fast padding of feet as the Kraut left his hiding spot. He’d almost lost him there, but as fortune would have it, he picked him up as he was boarding the boat to Turkey. He saw the man touch the woman’s cheek and kiss her gently before he left the dock. Yossi had bought passage on the boat and made it on board right before it sailed. He kept his distance... hid in the shadows... and avoided being spotted by his quarry. There was no chance to eliminate him on the boat. It was too crowded and the German made sure he was always in the company of several others.  He had stayed well back on the road from Bodrum to Ankara, where the German had returned his rental car and disappeared into the maze of backstreets. “Damn it,” Yossi spit for the hundredth time.

Hans smiled to himself as he slipped aboard the small private plane.  It was only moments before he gunned the already warmed engines and rolled down the runway and was winging his way to Berlin. “Shadow Hunters,” he scoffed and then laughed. “Chase shadows and you catch the wind.” ...to be continued.

Anyone who thinks they have what it takes to carry this story through the next part, simply comment below. First person to comment that they would like to continue the story, has ONE WEEK to post the next part to their own blog.

Place this message at the end of your completed blog entry, and wait for someone to accept the challenge of taking this story on as you did. Once the next post is in place on your blog page, post another comment below, with link, to let me know and I will re-post my part with that link to your next part of the story. If someone has already offered to take the story from here, please feel free to leave a comment saying you would like to play too, and should we run out of volunteers we can go back and beg you to take over where the chain ends. Thank you and we shall be interested to see where you take it.