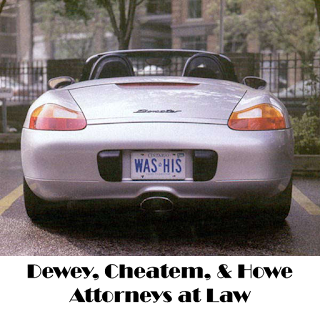 Lawyers are a breed apart. In fact, I sometimes think they ought to be assigned a whole new species, or at least members of two subspecies... Homo sapiens currencyensis and Homo sapiens semialtruisticus.

Each of these subspecies have distinctive field marks. Using the following guide, almost anybody can spot and distinguish them. Both can be seen roosting in popular restaurants during the noon hour staring intently at a stiff-backed menu and wearing three-piece suits of a dull color, although semialtruisticus has been known to be a bit more flashy during reporting season.

Both share decidedly similar behavioral patterns when roosting. After reading the menu, they can be seen to fold their arms across their chests and arrange their facial muscles to produce a thoughtful scowl. Whether this is in anticipation of decision-making or merely a territorial signal to other professionals is unclear. More study will have to be done.

When the wait person (both currencyensis and semialtruisticus are politically correct in their gender sensitivity) comes, there is much harrumphing and thoughtful pausing. It makes the eating ritual a very dramatic event. During the course of the meal, very predictable behavior occurs. When asked a question, members of both subspecies become very reserved, often pausing for several minutes while cogitating on the precision of the answer. "Would you like a beer?" may take up to fifteen minutes to resolve. Because of this practice, they are considered very mature even though some may have only recently left the nest.

The differences between currencyensis and semialtruisticus are immediately apparent once you leave the noon roost and feeding grounds. Currencyensis is generally observed driving an expensive foreign car to an impressive steel and glass building in the high rent district where he will ruminate remain for the remainder of the day at a cost of two hundred or more dollars an hour, depending on the part of the country in which he nests. Semialtruisticus also drives away in a foreign car, however it is usually a VW or a Toyota. He comes to roost in a government office or a store front where he spends the remainder of his day among those of his flock, plaintively vocalizing about the plight of the taxpayer and the little guy. All at the expense of the taxpayer and the little guy, of course.

So there you have it... the pocket guide to lawyers. I just hope that my brother gets time to finish that contract for me before he reads this column.