The Square Peg - Ripped From Today’s Headlines - The News Just Ain’t What It Used To Be.


The Square Peg - Ripped From Today’s Headlines - The News Just Ain’t What It Used To Be.
© S. Bradley Stoner 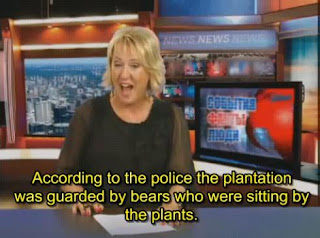 I’m not a big fan of news. In fact, I avoid it whenever possible. There are good reasons for this. For one thing, most of what gets reported just isn’t news. And if it is, it’s stale. I mean, with the Internet, you can almost read about things before they happen. In fact, if you visit certain sites, you actually can. Of course they pretty much focus on UFOs, religious prophecy, conspiracy theories, and financial market predictions. I try to avoid those as well since they’re, well, pretty much depressing and we have enough depressing news daily. I do like The Onion, however. If nothing else, it lightens the load... and provides an immeasurable amount of chuckles when people on social media actually think it’s real news and start ranting about whatever topic it touches on that turns their crank. Anyway, enough about my prejudices... let’s get to those headlines.

Semi-Truck Hits Tour Bus in France. Delilah Dimwit reports on the horrible accident that killed 42 somewhere in France. With a sad look on her face, she tells us that the tour bus was filled with retirees, but you can tell that Delilah, a cherub of maybe twenty two, really couldn’t care less about a bunch of old geezers sent on an early vacation to the afterlife in a country she probably can’t even find on a map. Her synopsis is a thirty second sound bite, really just the headline with fluff words filling the remaining 20 seconds allotted, before she moves on to the next topic, which obviously excites her.

Report Says 90 Percent of College Students Tired, Stressed, or Bored. Whoa... Dimwit obviously considers this a priority news item. She waxes rhapsodic about the pressures of college, “You know, tests, homework, dating...” all those little things that compete for a young persons attention that “just stress them out” and leave them feeling tired... especially for those early morning classes. It’s obvious Delilah still relates to those trying times. She should, they just ended last year. An interviewee, Gary Gamester summed up the situation for those who are bored. “Like, we had to leave our Game Stations and X-Boxes at home, ‘cause like we were afraid they’d get stolen. So like this means that all we have are our PS-2s and i-Phones and like man that’s just not the same experience... so, yeah, it’s a drag and kinda boring.” I’m left scratching my head. Three minutes devoted to the tribulations of college kids? Seriously? Then, thank heaven, a respite from Dimwit... something about the weather.

Hurricane Patricia Largest in History. Derek Duckwaddle takes this story... after all, he’s the one tagged with giving us all the news, good or bad, about our weather. “Hurricane Patricia has turned into the largest recorded hurricane... Pacific or Atlantic!” He tells us it’s like a hundred mile wide F-5 tornado. Hey! Now that’s something Texans can relate to... I mean it’s not like south Texas was ever hit with a hurricane. I suppose the Galveston storm of 1901, Carla, Audrey, Allen, Celia, Beulah, Alicia, Rita, Ike, and all those unnamed ones over the past 100 years don’t count because... well Patricia is going to hit Mexico someplace below Puerto Vallarta. But that’s not why I’m interested. Duckwaddle has been predicting up to ten inches of rain for us over today through the weekend... and that was when ol’ Derek expected Patricia to make a cat two. (“I guess we missed that one, hehe, but it is an El Niño year!”) Now that it’s a cat five, predicted to cross Mexico on a northeasterly path and bullseye good ol’ south and south central Texas, we’re only going to get up to five inches of the wet stuff. Okay, let me get this straight Duckwaddle... the storm has intensified, it’s carrying way more moisture, it’s tracked to hit us dead on (as a tropical storm of course), and we’re going to get less rain? It isn’t that I don’t trust Duckwaddle... but I’m making sure Bingo Bob’s boat is good to go in case we need it.

Clinton Survives Raucous Congressional Hearing. Yeah... I skipped this one, I’ve heard enough B.S. from politicians. Besides, it was time for a bathroom break... too much coffee... too little time. TMI?

Moving on, Cindy Siberfreek was next up with her upbeat segment on technological wonders new on the market. This isn’t really news, but face it, it’s hard to resist watching a bouncy blonde with a Barbie figure, chirping out the latest dope on new apps, games, and gizmos. Nothing better than cute that speaks geek, is there? What? You want to know what the new apps, etc. were? Don’t ask me, I haven’t got a clue... my attention was kind of focused on other things. In that state, everything coming out of a TV sounds a lot like, “Wah...wah... wahwahwah.. wah wah,” to me.

Ah, finally, the traffic report. My favorite part of the morning news. Did I mention our traffic girls are hawt?! You only get to see them for a few seconds on each report, but the wait is worth it. The other reason I watch the traffic report is for entertainment. It’s the Texas road follies. Texans don’t really know how to drive in any kind of weather but calm, hot, sunny days. The rest of the time they’re at a loss. Get the roads a little wet, it’s bumper cars time on our highways. A little wind... they’re off the road. There’s the occasional serious accident, but most are fender benders where everybody walks away unhurt or with minor injuries. Well... they’re minor until one of the Texas lawyers gets hold of them and turns it into a catastrophe with settlements of $100,000.00 “in you’re pocket.” Did I mention I hate ambulance chasing lawyers? I digress.

Anyway, let a little drizzle hit the roadway and it’s like a Slip ‘n’ Slide out there. Last night’s foible was a five car pile up about half a mile from where I live. Seems a car traveling south on the main highway lost control crossed the median and wound up smacking head on into an northbound car. This was followed up by two other cars and a minivan crashing into them and each other “trying to avoid the initial crash.” I don’t think they tried all that hard myself. I’ve avoided crashes at least a dozen times. It takes a combination of prudent speed, not following too close, and keeping your options open. Now that we have flash floods likely on the way, we’ll have the idiots that think because they have a pick up or an SUV, they can ford the minor Mississippis that flow across our roads at every low spot imaginable. They think that “Turn Around Don’t Drown” thing applies to everybody but them. You see the results of that on the nightly news... if you happen to watch it. On ice? Forget about it. That’s entertainment for northerners... they devote whole TV programs to it.

Well, I’ve finished my toast and another cup of coffee. So enough of this nonsense... I mean news. On to more productive things like counting the nuts and bolts in my shop. We’ll do it again tomorrow, unless they start putting Tom and Jerry back on early morning cartoons.
Posted by S. Bradley Stoner at 10:02 AM