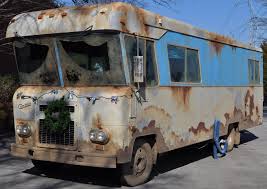 Just the other day I noticed an older motorhome parked in front of Bingo Bob’s house. I think it was an early Winnebago, but it was hard to tell. The side panels had been patched so many times the logo was no longer visible. I saw Bob on my daily walk (I left later to avoid meeting the skunk again... why tempt fate?). I thought he had a beer in his hand and asked if he didn’t think it was a little early to get started on the brewskis, but he said he was just picking up after his guest.
“Oh? Old friend?” I asked.

"Been long since you’ve seen him?”

I was about to ask why when the wind shifted and I caught the strange mixture of smells coming from the motor home. It smelled like fruit gone bad mixed with bacon grease and gun oil. To say the least, it wasn’t pleasant. I backed off a few steps.

“He’s an inventor,” Bob offered. “He sells his stuff at those craft shows and flea markets.”

About that time Bob’s cousin opened the door and popped out of the old motor home. What a vision. The guy was about five foot six and weighed around two hundred pounds. He was wearing a loud Hawaiian shirt from the fifties, a pair of plaid Bermuda shorts, long paisley socks, and wingtip shoes. In his hand he had a plate of bacon, sausage, and scrambled eggs... at least that’s what I thought they were. They were a shade on the green side. He wiped his mouth with the back of his hand, rubbed it off on his shorts and approached me with his hand extended.

“Hi there... I’m Sylvester, but everybody just calls me Slick.”

With more than a little trepidation, I took his hand and shook it. Now one expects a firm handshake from another guy, but Slick’s was as limp as a wet rag. Frankly, it was kind of off-putting. The little cloud of fruit flies circling him didn’t help much. I was tempted to run home, but Slick displayed a row of perfectly white teeth, accented by a big gold central incisor that caught the sun and damn near blinded me. When he spoke, he sounded like one of those announcers that hawks things like the Pocket Fisherman or Gansu Knives. The words came out fast and furious.

“Hang on a minute, I wanna show you some of my inventions... got patents on them and everything... don’t go away, I’ll be right back!” He disappeared into the decrepit old motor home.

“Bob, I’d like to stay, but I have things to do,” I said, taking a step towards home.

“You might as well stick around,” Bob said with a forlorn look on his face, “he’ll just track you down and you’ll play hell getting rid of him. Trust me, I know.”

True to his word, Slick was gone only for a moment before returning with a medium sized box jammed with all kinds of things. “Told you I’d be right back,” he bubbled. “Now then, check this out! It’s the world’s greatest mousetrap... perfectly humane and guaranteed to end your mouse problems.”

“Yes sir, just take a peek at this little wonder!”

The contraption reminded me of booby traps I’d seen in another lifetime. It was basically an open ended box with a set of triggers and a piece of metal that fit into a slot with a metal spring attached. On closer inspection, I could see that the metal in the slot was a single edged razor blade. I started to say something, but Slick cut me off.

“You see... the little mouse pokes his head in here going after the bait... it can be anything grain, cheese, peanut butter... whatever you have. Mice aren’t picky eaters. Anyway when he stretches to take the bait he hits these little wire triggers, releasing the spring block, and WHOOSH! down comes the razor and lops the little rascal’s head right off... they don’t escape!”

“Okay, moving on...” Slick offered up a cockroach trap. It operated on the same principle only it was a little smaller. “Now don’t tell me you don’t have cockroaches,” he said. they’re everywhere down here.”

Well, that part is true, but they’re American Cockroaches and they pretty much are outdoor critters and, since I spray an organic bug spray both on the outside and inside perimeters of my house on a quarterly basis, they don’t live long if they do make it in the house on the rare occasion. I so informed Slick.

Slick frowned briefly, but moved on. He had a moth trap with a little bright battery operated light at one end. It operated on the same principle as the mouse and cockroach trap. I told him I had geckos that did an adequate job on the moths. I made a joke about a mosquito trap, but he said he couldn’t find the proper combination of materials... those bugs were just too light to trip the spring, so he’d had to abandon the idea. Now all this time, Slick was in pretty close proximity to me and those flies were really starting to annoy me. I had a notion it had to do with that apple smell that emanated from Slick.

“Just out of curiosity, Slick, why do you smell like three day old apples?”

Before I had a chance to object, Slick stripped off his shirt, exposing a very hairy chest and belly, and held up the shirt so I could see his handiwork. Yep... sewed into the arm holes of the shirt were little mesh pouches that held small apple slices.

“See there! All natural ingredients... a truly green product. I’m going to make a fortune with this one!”

I waved the flies away as they closed in on me. “Somehow, I don’t think so, Slick. I gotta go...” and muttered under my breath, “and take a shower with lots of good old fashioned soap.”
Posted by S. Bradley Stoner at 2:01 PM