The Square Peg - Health Care... I could use a little less of it.


The Square Peg - Health Care... I could use a little less of it.
© S. Bradley Stoner 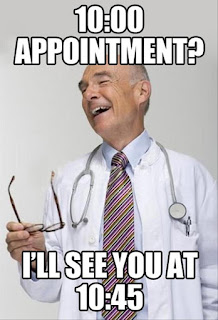 Well, it’s that time of year again... my semiannual visit to the doctor and my annual visit to the eye doctor. They make this crap mandatory. I guess they’re making up for all those years I boycotted doctors. Anyway, like a good little patient, I went in. First I had to see the lab tech, Ima Stikinyu, a week ahead of seeing Doctor Angel O. Mercy. You can’t eat or drink anything but water before you see the lab tech. Ima had no idea what I’m like on an empty stomach and without my morning coffee. She does now. If I heard correctly, she pled with the doctor to cut my visits back to once a year. She got her revenge, though, I left a quart low on blood and just a little light headed. I think she’s related to Dracula. That’s probably why she stays in that darkened room.

A week later, after an extended wait, I saw Doc Mercy. What a misnomer. He wasn’t. He did his damnedest to find something wrong with me, and then seemed just a little disgruntled when he couldn’t. I’m starting to think they get paid by the ailment their patients have. Me? I’m healthy as a horse. Still a tad overweight, but I’m working on that. I’m up to three miles a day walking and wearing out my weight bench. If I’m not careful, I’ll start looking buff... and that isn’t what guys my age are supposed to look like. On the other hand...

He listened to my lungs. Clear as a bell... from top to bottom. Good thing he didn’t catch me on a bad allergy day. Air has a hard time getting past my nostrils on those days. He listened to my heart. It was thumping steadily along at 68 beats a minute. No odd ball noises or anything. Last year the Doc had me hooked up to an EKG... he said at my age I should see a cardiologist... just in case and especially if something showed up on the EKG. Then after the test, he had the nurse tell me to go home... I was perfectly normal. Shucks, he didn’t even have the courage to come in and admit that I was right when I told him he wouldn’t find anything.

He asked how many times I had fallen in the last six months. Huh? I don’t fall... haven’t fallen in years, and when I did it was generally due to me doing something stupid like standing on one of those outdoor plastic chairs after it had sat in the sun for six hours. By the way, don’t try that. Unless you weigh what a second grader does, that sucker is going to collapse on you. Luckily, the chair was on the lawn when I was trying to fix a piece of molding on the eaves, so I had a soft landing. No harm, no foul. I did feel a little foolish, but that isn’t a treatable disease. If it was, I’d have been put in a padded room years ago.

Once he couldn’t find anything wrong with me, we had a pleasant conversation that covered everything from family to hobbies. I guess he needed a break from all the other patients. Just from what I saw and heard in the waiting room, he sees a lot of hypochondriacs. Most of them are half my age. What the heck is happening in this country? There was a twenty something in there who was limping a little... he’d twisted his ankle and was whining loudly to anyone who would listen. Shoot, when I was his age, I cut my knee with a chainsaw, wrapped a towel around it, and drove six miles to a clinic to get it stitched without a local. A friend of mine broke his leg when his horse threw him when he went hunting. He took the forestock off his rifle, jammed it into his boot and tied it to his leg and rode out fourteen miles to get to town. I could give you a bunch of other examples, but you get the idea. The Doc didn’t say whether he shared my opinion about younger folks or not. I guess I can’t blame him. The poor guy is in his forties, and I’ll bet he’s still paying off med school. The money’s got to come from somewhere.

Anyhow, that took care of the physical. That left the eye doctor, Mya Optic. I don’t know if the firm these doctors work for is difficult or a training ground. In any case, I’ve been going there for three years now, and have yet to get the same doctor twice. I don’t mind meeting new people, but on the other hand I like a little consistency in my health care. Of course, the eye doctor’s office routine is a bit like your other health care offices. First you have to see a receptionist and check in, then some kind of technician to take care of the tests that don’t require an advanced degree, and finally, you get to see the real doctor... the one with the advanced degree. Of course you don’t see the Doc right away, you have to wait in the examination room for a while. I haven’t seen any of my doctors right away since, oh I don’t know, 1960? It’s been a long time. I don’t know if it’s because they are inordinately busy or it’s a head game. Judging by the empty chairs in the waiting room, I’m inclined to thin its the latter.

“Try the next one up,” she says a little testily. So I do... once again backwards. This is my way of seeing if she’s paying any attention at all to her job. She’s busy now, furiously typing something into the computer. “One last time,” she says sharply, “do the top line.”

Now this is the BIG letter line. Anybody but a blind man could read this at this distance, even without glasses. So, I read it... backwards.

“I don’t understand how you could be getting this all wrong,” she grumps. “It doesn’t make sense.”

“Take a look at the chart,” I smiled. “Did you note what I read on that last line?” I knew she had, because I saw it on the computer screen... and that was a heck of a lot smaller than the eye chart letters.

“Read it backwards... it should match up with your eye chart.”

She looked at her notes on the computer and then at the chart. “Are you dyslexic?”

She just looked at me, rewrote her notes, and said, “The doctor will be with you in just a few minutes.”

Yeah, I knew that was a lie. A half hour later, there was a knock on the door. I was temped to say, “Just a minute, I’m not decent,” but figured that would just cost me another half hour.

I never could figure out why the eye doctor asks you to look first at her left ear, then her right, then up and then down while examining each eye, but there has to be a legitimate reason. I only had one issue with this. Mya is an attractive, petite woman in her thirties and she was wearing a deep vee necked blouse, so every time she asked me to look down, I was staring straight into her cleavage. I could feel my pupils dilating... I hope she didn’t notice, but if she didn’t she isn’t much of a doctor. And if she did, she was polite enough not to mention it.

To make a long story short, after twenty minutes she pronounced me fit as a fiddle, visually speaking. My prescription hasn’t changed a whit in three years. That’s a good thing. So, I’m good with the eye doctor for a year, but I have to go back to see Ima Stikinyu and Angel O. Mercy six months from now. Maybe next time I’ll convince them I can go a year between visits.
Posted by S. Bradley Stoner at 7:14 PM