The Square Peg - Bob Does Boo 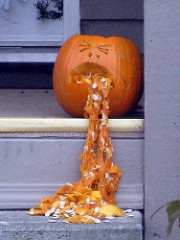 Well, it’s that time of year again. Yep... the candy bandits will soon be upon us. I recall when I was first married a my lovely and one of her friends used to go all out for Halloween. I don’t think I’ve ever seen so much gauzy festoonery, ugly pipe cleaner spiders, or old sheet ghosts in my life. In two days, they turned the house from a football haven into a haunted house from hell. If I had been a kid, I wouldn’t have gone near the place. Of course, we haven’t done that in years. Work, distance from best friends, and growing kids kind of did that under. Now, I’m lucky if I get the two store-bought witches hung out on the porch the day before Halloween. At least they don’t scare the bejeepers out of the little kids.

When the boys were young, I got the joy of taking them around the neighborhoods to pirate peanut brittle, cadge chocolate bars, cop cookies, swipe Sweet Tarts, and generally loot the candy dishes of every house out there. While my Sweetie and her friend sat in a nice warm car, following us around, I got to freeze my butt off in, often, below zero temperatures in Montana. Why it always turned cold the day before Halloween remains a mystery to me. As the boys grew older, they struck out on their own. Gone were the cute little pumpkin buckets of their childhood, now they carried pillow cases they heisted from the linen closet. To my amazement, they always managed to fill them. I recall one time in Kansas when my eldest and his best friend were at a loss in choosing a costume at the very last minute. I suggested they use some oversize garbage bags. When they eyed me suspiciously, I simply said, “You’re going as white trash.” They loved it... and once again, they made out like bandits. My eldest announced that next year they were going to get some large boxes, cut holes for their heads and arms, and go as trailer trash.

Despite my shortcomings as a Halloween decorator, others in the neighborhood make up for it. Dotted about one can see air powered pumpkins, headstones, skeletons, webs and spiders, and flying witches... all bought at the local party store. Seems nobody makes their own decorations any more. Maybe it’s the pace of life, but I kind of miss the old days when people spent time in their shops and sewing rooms creating midnight menaces to liven up the little ghosts and goblins that came in search of whatever goodies you have. But those, too, are now all store bought. The warnings on TV against accepting apples, cookies, popcorn balls and other homemade treats have pretty much killed the homespun Halloween.

Of all the neighbors, Bingo Bob is the one who goes all out. Bob never does anything halfway... especially not holiday decorations and festivities. You can count on him to host the biggest fourth of July barbecue, the strangest Halloween party, a Thanksgiving that would make the Pilgrims blush, and a Christmas party to end all Christmas parties. Right now, Bob’s yard is crowded... so crowded that the trip to his door is a veritable marathon of the macabre for all the little Trick or Treaters. The smallest ones start crying a block away, begging their mommies to not take them to Bingo Bob’s. It’s that spooky. If it was just the pop up witches, ogres, and flying ghosts, that would be one thing, but dropping spiders, springing skeletons, and oozing jack-o-lanterns coupled with the eerie music, blood-curdling screams, and creepy cackling is enough to scare off all but the most determined trickster.

Of course, Bob thinks this is all great. He says it builds character in the tykes. “Shoot, they don’t appreciate what they get if they don’t have to fight for it!” he declared as he finished planting a coffin in the yard so that it stuck halfway out of the ground and then opened the split door to reveal a red-eyed, white fanged vampire. “Watch this,” he giggled, and pushed a button that lit up the red eyes and dripped red dye down the fangs accompanied by the high pitched screams of an imaginary victim.

“Geez, Bob, you need to put a diaper dispenser for all the little ones or you’re going to cut their night short. That’s not nice, especially since Daylight Savings Time ends at midnight on Halloween”

“Yeah, I know,” Bob cackled gleefully. “My party can go an extra hour! That’s like a whole extra hour of booze time.”

I watched as he adjusted the motor that trundled the giant Black Widow back and forth over the metal arbor he had erected over his sidewalk. “Well that’s just peachy,” I mumbled, wondering how many of his guests who turned our street into a parking lot of Super Bowl proportions would make it home safely.

“You and the wife should stop by when the trick or treaters thin out... But you gotta come in costume... nobody gets in in street clothes.” He whipped out his wallet and pulled a picture from it. “This is what the wife is wearing this year.”

Now, Bob’s wife is an attractive woman, but she’s not centerfold fit, and she isn’t a spring chicken anymore, and, frankly, there were bulges in the skimpy costume where there shouldn’t have been bulges, but I’m not one to criticize. I have a few bulges where there didn’t used to be bulges as well. As Sheldon Cooper on “The Big Ban Theory:” said, “Oh gravity, thou art a heartless bitch.” That and my wife’s good cooking pretty well ended my super hero costume days years ago. Now I’d have to go as Elmer Fudd, so I said, “Nice costume, and thanks for the invite, but my wife and I have a tradition of watching creepy Stephen King movies on Halloween night.”

“But you have one on me,” I returned cheerfully. I knew he would. After Oktoberfest weekend, I had no doubts about Bob’s capacity for liquid refreshment and fun. “Happy Halloween, Bob... gotta go.”
Posted by S. Bradley Stoner at 2:01 PM