The Square Peg - Hobbled, But Not Corralled


The Square Peg - Hobbled, But Not Corralled
© S. Bradley Stoner 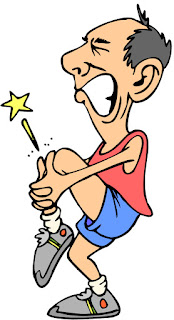 I finally wandered out to get the mail this morning. Bob was out in his yard trying to decide if he wanted to hay his grass or let it grow a bit more. He looked up and saw me gingerly making my way to the bank of mailboxes and came trotting over.

I just pointed at my ankle, which was about the size of a baseball.

Only Bob would ask a question like that when seeing a blue-black-purple-yellow bruise.

“What’d ya do? Trip over the furniture again?”

Let me explain. We have this thing in our family. It happens about once every two or three months. One of us will stub a toe on some piece of furniture. It starts a cycle of toe stubs, and each one of us does that in turn. It doesn’t even matter if we’re all in the same place or not, one of us stubs a toe, then another does it, and another. Out of the blue, we once got a call from our oldest who lives several hundred miles away.

Without ceremony, he asked, “Okay, which one of you mashed a toe?”

Right then, I knew what was coming. So it goes. I’m not sure if it’s empathy or a curse. And we’ve had some dandies. One month I’m pretty sure everybody broke one toe or another. I mean, when we stub toes, we don’t mess around. And we don’t have that dainty Queen Anne furniture... we have end tables it took a forest to build. We’re talking massive here. Unfortunately, it’s pretty hard to hide it when one or another of us stubs a toe. We tend to gimp for about a week while it heals. We don’t complain, it’s just one of those things we have to deal with on occasion.

This time, however, my baseball-sized ankle wasn’t due to anything furniture related (I took care of that last month). Nope, this time it was due to wet grass. We had a brief respite from the rain Wednesday and, since the grass out front had decided ‘what the heck, I think I’ll grow another five inches,’ I decided to take the opportunity to give it a haircut. So, I gassed up old Greenie, checked the oil, pushed it out of the garage, primed the carburetor, and gave the old cord a yank. Old Greenie roared to life and then purred like a kitten. I figured the new blade I had installed would make short work of our rather small front yard. Did I mention I ruined the old blade by hitting a rock? No? Oh well, that’s another story.

“What’d ya do? Run over your own foot?” Bob asked as I retold the tale.

I just stared at him, trying to figure out how a person could run over his own foot with a mower you push from behind. Then I decided if anybody could do that, it would be Bob, so I answered, “No Bob, I’m not as talented as you when it comes to things like that.”

“Huh,” Bob replied. “So what did ya do? It ain’t like yer yard is terrifically steep or anything.”

So, I had to explain to Bob just what happened. I didn’t want to, but it was better than having him tell the neighborhood I ran over my own foot with my own mower, which he likely would have done without the explanation.

“Well, Bob, if you recall, it had been raining for four days straight until Wednesday when we got a break. I figured the lawn had dried enough that I could trim it, which I did. Unfortunately, over in that thick part, the grass was still a bit wet and the clippings kind of clumped after being cut. Since I could feel the rain approaching again, I decided to hurry up and get the lawn done. I was mulching the clumps when I hit one of them in full stride and started to slip. Anyway, as I put out my foot to arrest the slip, I rolled my ankle.”

“Ya know, when a football player does that, they just tape it up and send ‘em back in.”

“Hmm... too bad I don’t have a trainer on staff,” I snapped. “Heck, if I was thirty years younger, it wouldn’t take a week or more to heal. Speaking of football, I’ve got the Denver game recorded. I think I’ll go put my foot up and watch it.”

I turned on my heel, felt the pain shoot up my leg, and gimped back home. As I reached for the doorknob, I realized something. “Dammit... I forgot to get the mail!”
Posted by S. Bradley Stoner at 11:48 AM