The Square Peg - The Bob Factor 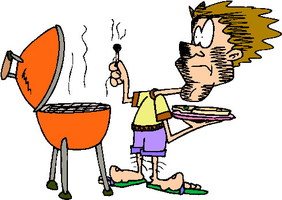 I just got a notice from the neighborhood association president... well, me and however many other homeowners there are in the neighborhood. The association is throwing a “Back-To-School Bash” at the park. There’s going to be water slides for the kids, pizza, and music and a family movie. That’s pretty cool. I’m pretty impressed with our new president. He gets things done and makes get-togethers fun. I brought this up to Duncan on our morning walk.

Let me explain. The last bash was a general get-together for all the residents. In addition to the music and the blow-up play house and slides, the party was billed as a free barbecue with hamburgers, hot dogs and sodas. Everybody was to bring some sort of side dish, making it sort of a potluck. Bob, being Bob, volunteered to get the burgers and hot dogs from the store, our president having paid for them out of the HOA funds. He also volunteered his barbecue. You know, the big one he can tow behind his truck. Yep, the one that puts out enough smoke to cause an EPA air alert.

Well, true to his word, Bob got the picnic meats and hauled old smokie up to the park, set it up, and piled in the charcoal and wood chips. Being as how he had to do this after work and only an hour before the party was to start, he kind of overdid it on the lighter fluid. He wanted to get it going really well before it was time to put the burgers on. When he touched it off, you could see the flash for miles. That was followed immediately by volumes of thick, black smoke. Now those of us familiar with Bob didn’t give it a second thought. Myra Muddle, who was out on her porch with her walker and cell phone, however, freaked and called the fire department to report that our park was on fire. Yep... the fire department showed up, sirens blaring and lights flashing. It was part one of the fiasco that day. Apologetically, Bob invited them to stay for the barbecue. They politely declined.

An hour later, Bob commenced to grilling burgers and hot dogs. Now, old Bob is pretty good with rib, brisket, and the occasional steak, but it was pretty obvious he didn’t have a clue on burgers and dogs. The first twenty burgers came out crispy and smelling like  petroleum products The first round of hotdogs were... well, they were split cinders. Basically that first run was inedible. Even the grackles wouldn’t touch them, and they eat almost anything.

Bob’s reaction? “Huh... that’s odd.” And he threw another twenty premade burger patties on the grill. “Better watch these a little closer.”

The association president, gracious though he was, looked forlornly at the pile of burnt burgers and dogs in the trash can and mumbled something about going over budget if he had to buy more. Duncan saved the day by running home and bringing a big package of frozen burgers from his freezer.

“I hope nobody is allergic to venison,” he said.

Yep, those burgers were from last year’s hunting trip. I thought they were pretty tasty, but there seemed to be a lot of wrinkled noses on the women and a bunch of partly eaten burgers and buns in the garbage from late-comers who missed out on the beef. Everybody just blamed Bob for bad cooking though. Bob didn’t care, though, he’d brought a cooler full of beer and was getting happier by the moment. He didn’t even notice when Duncan elbowed him aside and took over grilling duties. Somebody had to save what hot dogs were left from the ravages of the grill and an oblivious Bob.

After the meal, Bob decided he’d wander over and see how the kiddies were doing. I’m not sure if it was just the kid in Bob or the beer in him, but Bob decided it would be cool to go down one of those inflatable slides. Those slides are not meant for adult use. That didn’t stop Bob. Up he went to the top. Once there, he didn’t just sit and slide down... he launched himself and landed about a third of the way down the slide. There was a tremendous “BANG” and all the air went out of the slide suddenly, depositing Bob square on his rump from about four feet in the air. I wonder what that cost Bob. We never did find out.

Yep, the Bob factor at work.

As we stood there reminiscing, Bob wandered up. “Hey... whatcha talking about?”

Duncan, never one to mince words, instantly replied, “The Bob factor. You’re not cooking at the back-to-school bash, are ya?”

Bob looked downcast. “No... I volunteered, but the president declined the offer. Seems a shame to just let that big grill sit in my yard.”

“Did he also tell you to stay off the kiddie toys?”

“You know, you guys are mean... that was an accident.”

“Nope,” Duncan intoned, “that was the Bob factor.”

Bob just wandered off without saying another word.

“I think you hurt his feelings,” I offered.

“Not possible,” Duncan replied and then yelled, “Hey Bob! See ya at the bash!”

Bob waved, but he only used one finger.
Posted by S. Bradley Stoner at 11:18 AM