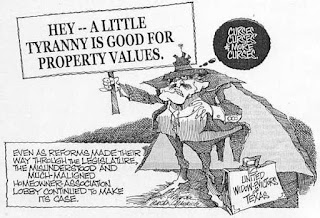 Well crap. We missed our annual HOA meeting. Not just me. Everybody. Yep, it didn’t get scheduled. This, of course, annoyed our HOA VP no end, and Pansy Kampfwagen immediately launched a blitzkrieg against our current president, condemning him for lack of attention to detail and the bylaws of the HOA. Now, it didn’t matter to Pansy that it is the responsibility of the management company to schedule the meeting and make sure everyone gets the annual report. Nope, Pansy, whose husband, Sig Kyle, was voted out last meeting, declared war on the President, chiding him for failing to read the bylaws and dereliction of duty.

Now, you’ve heard me talk about all the great things our new president has done for the neighborhood... the great functions he has organized, the nice work he’s done in upgrading the entrance to out little subdivision and his efforts to get everybody involved in an organization that was essentially dead on arrival before he took the reins. I suspect that, more than anything else, is what has Pansy pissed off... not to mention that replacing Sig kind of broke up the ruling triumvirate.

Three months ago, Pansy swore off posting in our neighborhood web site because people got tired of putting up with her rants... and told her so. It didn’t last. She was especially peeved at one fellow who had the temerity to attack her pettiness directly. Boy, did he pay for that. Power is a dangerous thing. He started getting hit with fines from the HOA. He got fined for taking his power washer and inscribing Happy Anniversary to his wife on his driveway. This is, apparently, a violation of the HOA rules. Then he got nailed for having a bush that overhung the sidewalk by about an inch. Yep... Pansy was rolling.

You need to understand, however, that folks in this neighborhood are not easily steamrollered. We fight back. The President fired back a comical response on missing the rule in the bylaws, stating that he would reread the bylaws during his criminal incarceration for failure to follow the rules. This was lost on Pansy, who indignantly pointed out that no rule for “criminal penalties” existed in the bylaws.

This prompted a response from Frank Furter who declared that he was going to buy out the management company and “run it right.” I’m not sure what that means. I don’t think anybody does, but look for a requirement that everyone has to own a Harley and ride it every weekend. Udn, udn.

Then Bingo Bob came up and said that we were all going to protest these unfair rules by putting our garbage cans on the curb every Monday morning, to which Pansy responded that it wasn’t much of a protest, given that Monday is garbage pickup day.

Duncan joined the fray, adding that we’d put our recycle bins out en masse on Wednesday night, hoping to elicit a similar response since they collect recyclables early Thursday morning. Pansy didn’t fall for it a second time. She just asserted that nobody was taking the discussion seriously, and that was too bad, because this was serious business. Whereupon Charlie replied that it was hard to take it serious when a fellow could get fined for wearing white after Labor Day. Pansy was taken aback, and promised to reread the rules because she knew of no such provision.

All of this prompted Patti Peeksalot to come to Pansy’s defense. “People are just mean,” she wrote. “Pansy is a great person and just wants to protect our neighborhood.”

“Not to mention that she’d make the trains run on time even if it meant running over everybody,” another wag fired back.

“I don’t know who came up with this HOA idea,” Col. Duffer penned, “but it just seems un-American to me. Nobody should be able to tell a man what he can or can’t do with his own property.”

Hear, hear, Colonel. Spoken like a true patriot... and Texan. I could almost hear the explosion in Pansy’s house... and she lives several blocks away... thank heaven!
Posted by S. Bradley Stoner at 9:48 AM