The Square Peg - Something Stinks or... Shhhh, Buzzards 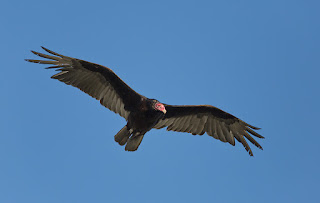 I had just gotten back from the store when I ran into the Bingo Bob and Duncan Donutz. They were in a heated discussion. I thought to myself, ‘Oh boy, here we go again.’ I figured it had to be over politics or politicians, and I didn’t want to get roped into either of those discussions, so I exited Lizzy with my bags and closed the door as quietly as I could and headed toward my front door. Out of habit, I pressed the lock button on my remote twice. The horn beeped. Damn, betrayed by my own security system. It isn’t supposed to work that way, is it? ‘Maybe,’ thought I, ‘they’ll see I’m burdened and just wave, giving me time to escape into the air conditioned confines of my castle. No such luck. I should have known.

I groaned as they trotted toward me. Some days you can’t catch a break. I suppose I could have feigned deafness (and frankly it wouldn’t be hard... too many years of things going bang around my ears haven’t helped my auditory organs), but I’m not that rude. So I waited until they walked up my walkway to the porch where there was at least a little shade. I should mention that once the rain stopped last week, it started to get hot... Texas hot.

“Thanks for waitin’,” Bob panted, mopping his beet red face with an old bandana that had seen better days.

“Buzzards,” Duncan stated flatly, like I was going to instantly know what he was talking about.

“Well, they are birds,” I replied. “I rather expect they would be up.”

“No,” Bob gasped, “They’ve been flying really low over the neighborhood the last week. Something’s up.”

I thought Bob might flop over and considered asking them in for a cold drink, but that would have shot the afternoon and I had things to do that didn’t involve Bob or Duncan. “Well, yeah,” I returned, “Duncan just said it was buzzards.”

“Knock it off,” Duncan groused. “You know what we mean.”

“Well if you are implying what I think you are, it’d be more proper to say, ‘something’s down.’”

“Right,” Bob rejoined. “That’s what we think. We just finished walking the whole neighborhood looking for something suspicious.”

“That would explain your current state,” I said. “It’s 94 with 80 percent humidity. Did you find anything besides the fact that your sweat glands work?”

“Well, there seems to be a bad odor permeating the neighborhood,” Duncan said, “and there is a newly dug garden in Frieda Farquewark’s back yard, and we haven’t seen Farouk around in weeks.”

“Oh, Lord... Have you guys been talking to Patti? You know you can’t believe anything she says, right?”

“Hey!” Bob tried to look hurt, but it wasn’t working. We’d both seen him chatting up Patti on more than one occasion.

“Anyway,” Duncan continued, “low flying buzzards usually indicate something is dead. Given they are circling the neighborhood at low altitude, it’s a safe bet something is rotten in Denmark.” He was doing his best impression of Kojak.

“Maybe you need to look there,” I suggested.

“Well, whaddaya think?” Bob asked. “Should we call the cops?”

“First off, Duncan is a retired cop, and even he knows that low flying buzzards and not seeing someone for a couple of weeks is hardly enough evidence to warrant an investigation.”

About that time the four preteens next door came boiling out of the front door, free of the fetters of school for the summer. Wafting behind them was a distinctive odor that I knew all too well.

Bob gave them a passing glance and demanded, “Well what do you think it is?!”

I wrinkled my nose, wiped a tear from the corner of my eye, and replied stoically, “Gym sox, shorts, and tee shirts that haven’t seen the inside of a washing machine for nine months.”

Duncan scratched his head, Bob blinked, and I inserted the key in my door. If I didn’t get the meat I bought inside, it would be more than dirty gym clothes attracting buzzards.
Posted by S. Bradley Stoner at 3:07 PM