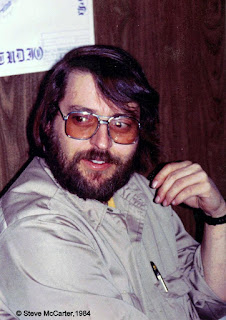 I know this is Texas, but this isn’t about former presidents. I had to go to the hardware store yesterday. As I was driving out of the neighborhood, I noticed that everything suddenly looked a little fuzzy. Or should I say everyone? Well, okay, at least the men, or a majority of them. I won’t mention the women who looked a little fuzzy too... it isn’t their fault, but the men... it’s deliberate. I wasn’t sure why, but I meant to find out.

When I got back home, I looked up Bingo Bob. Turns out, Duncan and Frank had also looked him up. There were with old Bob in front of his house. Well, actually on his driveway, leaning up against his boat. Seems Bob was about to go on vacation, so it’s a good thing we caught him. Another six or eight hours and he’d have been gone. It takes Bob a while to prep for vacation and he always waits until the last minute. Even then he has to wait for his wife. She packs like they are going on a six-month cruise even if they are only going to the coast for a week. With all the luggage that gets packed into Bob’s vehicle, it’s a good thing he’s taking his boat. He wouldn’t have anywhere to store the fishing gear and beer otherwise.

Bob, on the other hand, packs light... except for the fishing gear and beer that is. I’m pretty sure he only takes one spare set of clothes... and that includes underwear. I think some of his cousin Slick must have rubbed off on him... and that’s not a good thing. Anyway, as I approached the intrepid trio, I noticed that they were all a bit fuzzy too. I mean like two day’s growth of beard, which is kind of weird since Duncan and Bob are almost always clean-shaven and Frank usually sports a well-groomed mustache that kind of sets off his pony tail.

Me? I have a mustache. With two brief exceptions, it’s been on lip since I was 20. We’re pals, my mustache and me. We don’t go anywhere without the other. Most of the time it’s trimmed, but there have been occasions in the past, and some more recently, where my lip plumage has gotten a little wild. When it does, it kind of makes me look like an old mountain man... or a homeless drunk, depending on your point of view. My wife talked me into shaving it off twice (that would be the “two brief exceptions”), but on both occasions it scared the bejeepers out of my boys and they insisted I grow it back. She was out-voted. But she drew the line at beards, no matter what the kids wanted after they saw that picture of me from years ago.

Bob looked up as I approached. “Yeah, I’m goin’ on vacation,” he aimed the statement in my direction. “What else ya wanna know?”

“I just saw y’all hangin’ out and thought I’d come over and say hi. Don’t get so touchy.”

“Okay... well just don’t start in... I ain’t in the mood.” Bob reached up and scratched his stubble, which, quite honestly, looked like a poorly sown field with patches of growth separated by blank spots.

This caused Duncan and Frank to scratch their beards, which admittedly were in much better shape than Bob’s. At least they were even and reasonably full, even at this stage of growth. I felt an urge to scratch my face, but I had just shaved before I went to the hardware store, so my cheeks were smooth as a baby’s butt. It would have looked stupid, so I kept my hands in my pockets to resist temptation.

“What’s up with the facial fungus?” I asked.

“Give it a rest,” Duncan admonished. “He deserves an explanation.”

“We’re starting a protest movement,” Frank said. “I’m gonna put it out on the net.”

“What the heck are you protesting? Razor blades?”

“Yep,” chimed in Bob. “We got most every guy in the neighborhood to join the shaving strike and we’re gaining adherents daily.”

“That’s right,” Frank added excitedly, “we’re sick of rising prices of blades. Have you looked at them recently?”

Now I have to admit the price of blades has gotten a little ridiculous recently. Heck even that bald guy on TV who owns a pawn shop is getting in on the action. He hasn’t boycotted shaving, but he is hawking good old fashioned safety razors as the smart alternative to those expensive multi-bladed razors that just get “clogged up” after a few uses. His shiny head and smooth face are proof of the effectiveness of the good old safety razor. Me? I’m not sure why they call it a “safety razor.” The last time I used one, I ended up looking like I just been in a duel with Zorro. No thanks.

“So whaddaya say?” Bob queried. “Are ya gonna join the movement?”

“I don’t think so, Bob. Criminy... it’s summer. A beard and 95 degrees at 80 percent humidity causes my face to break out. It’s horrible and it itches.”

Bob’s wife, whom nobody had noticed had wandered out to put something in Bob’s pickup truck, called from the far side, “And so does your wife, Bob.”

“Fellahs, I think the Razor Rebellion is going to be short-lived. It’s going to get superseded by the Wifely War on Whiskers.”

“You’ve got a point,” Duncan said, “and they’ve got some potent weapons in their arsenals. Besides, this itch is going to drive me nuts.”