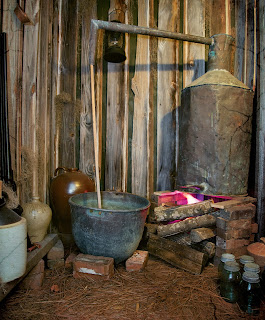 Another hot day here in Texas after a pleasantly cool morning. I figured I’d get a little outdoor work done before it got blisteringly hot, so I cinched up my shorts put on an old religious tee shirt (yep, that would be the holey one), and commenced to collecting the tools I would need. I was fixin’ to trim my bushes when that sicky sweet smell punctuated my smeller. Okay, that’s enough with the local lingo.

Now, I’ve traveled through the Kentucky backwoods, the Tennessee hills, and lived in the south long enough to know what sour mash smells like. It’s just that I didn’t expect to smell it in my own neighborhood. Usually that is reserved for the hinterlands where it won’t attract revenuers. I got curious, so I followed my nose. Sometimes it’s as good as a blood hound’s. Sometimes it can’t sort sh%t from Shinola. It just depends on the day. Today, the old smeller was working extraordinarily well. Maybe it was the cleansing alcohol in the air. I don’t know.

The scent of that good ol’ mountain dew led me straight to Bingo Bob’s. Go figure. Anyway I did something I normally don’t do. I tiptoed up to Bob’s fence and peeked through a knothole in the cedar. Yep... the old smeller hadn’t deceived me. There on his patio extension was a pretty, new copper still. And it was cookin’. Bob was squatted beside it, tinkering with some copper tubing. So intent was I on perusing this scene that I didn’t hear Duncan come up behind me.

“Whatcha lookin’ at there, Snoopy?”

That caused a startle reflex that put splinters in and a nice bump on my forehead.

“You okay?” he asked as I turned around rubbing the bump and picking out wood.

“You could have waited until I backed away,” I groaned.

I don’t know whether Bob heard Duncan or heard me smack the fence. Doesn’t matter. He heard us and came out of the side gate. “Hey guys... you gotta come see this. I got it working!”

Duncan and I followed Bob in a line, sort of like ducks, as he led us through the gate.

My head swiveled to look at Duncan. “You knew about this?”

“Yeah... we went halvseies on it. We’d have asked you, but you said you don’t drink anymore.”

“Well, that’s true. Besides, the last time I tried White Lightning, it damn near killed me.”

“You gotta get the mix right,” Bob said trying his best to sound like an expert moonshiner.

“Or cut it with distilled water,” Duncan added, making him sound like a drug dealer, which was kind of funny considering he’s a retired cop.

“Hope you checked the regulations on how much of that stuff you can make,” I said.

“Just for personal consumption,” Duncan said knowingly. “But we don’t want it to get out or we’ll have people wanting to get some for free.”

Bob’s eyes lit up like a pinball machine. “Hey... maybe we could sell some... who’d know?”

Duncan gave him a hard stare. “Don’t go stupid on me, Bob. You can go to jail for that.”

“How come those guys on TV can get away with it.”

“That’s a show, Bob... it’s not real even though they call it a reality show.” Duncan eyed the clear liquid dripping out of the bottom spigot into a jar. “Hey, can I try a little?”

“Where’d you guys get this thing?” I asked.

I went back home after wishing them luck and looked up stills on Amazon. They had to have invested over $500.00 in that set up, not counting the fixings. At least the 20-gallon still would make 5-6 gallons of moonshine a run. If they kept it running, they could make a minimum of 35 gallons a week. That’s a whole lot of “personal consumption.”

Later this afternoon, I heard a loud bang. I went outside to investigate. Duncan was already at Bob’s yelling at him. Apparently Bob went in to take a nap and left the still running. You’re not supposed to do that. If something goes wrong, particularly if the pot overheats it will... well, you know. And it did. It blew the top right off that cooker. It was lying in the street along with fragments of condenser coil.

“Hey Bob!” I yelled. “Your secret is out... and all over the neighborhood!”

Bob and Duncan chorused back, “SHUT UP!”