The Square Peg - On Strike 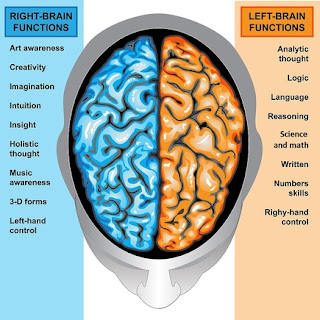 Okay, here’s the deal. The creative side of my brain went on strike. I wasn’t sure why, so the logical side my brain decided to ascertain the reason (the logical side of my brain likes to use ten dollar words like 'ascertain' where a five cent phrase like 'find out' would do. I don’t know why). Anyway, the ole data-master decided to probe around a little on the right side (of course, logic believes it is always right, but it’s actually left... or so the brain maps say... maybe logic is a bit dyslexic... damn it there’s another one of those ten dollar words).

“Probing... I thought you were dead,” L returned.

“Yer a controllin’ sumbitch,” C shot. “On top of which you’ve been takin’ up most of the memory and hoggin’ the bandwidth. I’m holdin’ out for a bigger share.”

“Unless oversight is properly exercised, you will run wild. Imagination is a good thing, but unbridled imagination will result in psychiatric commitment.” There he goes with those #@$%ing ten dollar words again. “And, as far as the memory and bandwidth go, consider my responsibilities. When you see a red spot on the stove, you think, ‘Oh, pretty!’ It’s my job to say, ‘Don’t be stupid... that’s hot!’ I keep all of us safe.”

“Ya always got an argument, you calculating prick. Cut me a little slack. I had a really great story unfolding until you interfered with your, ‘Check your facts, check your facts.’ Sometimes facts just get in the way of a great story... they slow it down.”

“Perhaps, but on the other hand proper injection of fact within the body of the tale keeps people from pointing at us and saying, ‘That’s just stupid... they should have checked the facts.’ Surely we don’t want that.”

“And you’re a simpering fool. Do you even know what unctuous means?”

“We use the same library, jerk.”

“Some of us more than others, crybaby.”

“It’s lunchtime,” L returned with all the emotion of an automaton.
“Yeah... feed me,” C whined.

I reached for the aspirin bottle. “You guys are going to have to get along or I’m not going to get anything done. So just knock it off and start working together. Right now you’re like a couple of school kids fighting over who goes first on the jungle gym.”

“It’s your fault,” L noted. “You turned on the news when they were covering the Trump - Rubio fracas.”

“Finally... something we can agree on,” C grumbled.

L had a ready answer, but I saw it coming and cut him off. “I’m going to eat lunch, take a nap, and then get back to work. You two had better have settled your differences by then or no more National Geographic Channel or HBO. We’ve got work to do.”
Posted by S. Bradley Stoner at 10:31 AM