The Square Peg - The Great Bug Massacre of 2016 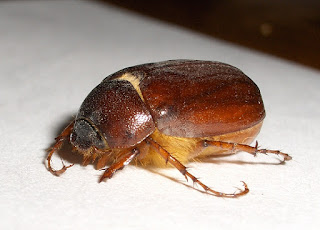 It started two nights ago. It was an all-out assault. They were coming from everywhere. The buzzing was horrible. First came the scouts... probing our defenses. Rushing at us in a headlong attempt to drive us from their objective. When we repelled them, their main body massed for a frontal attack. It was like being hit with wave after wave of squadrons of kamikazes. I was tempted to sign up for Federal Service and get one of those neat uniforms they wore in Starship Troopers because ours was becoming a !@#$ing bug planet.

We brought out the heavy artillery... flip flops and scuffs. When wielded properly, these are deadly weapons in the hands of an experienced infantryman. And believe you me, after one season doing battle with the hard-shelled horde, you’re experienced. A really good soldier can knock the suckers out of midair with a single swipe. A quick followup yields a satisfying “THWAP! POP!” as you splatter their bug guts on the patio floor or the brick wall. Their bodies pile up and still they keep coming. If you listen carefully, I’m pretty sure you can hear their comrades screaming “BUZZZAI” as they bore in for still another thrust at the beacon near the door. I’d turn it off, but then I’d be shooting in the dark. That just makes you tired... and gives the bugs a better than even chance.

Even experience and fortitude doesn’t prevent the odd ones from impacting on your noggin or some equally sensitive part of your body. I hate it when that happens. It’s like getting nailed with a BB. Heaven forbid they get near your ears... a feller could go deaf! %^#! bugs! I quit keeping a body count... it works about as well as it did in the sixties and seventies when it comes to judging success on the battlefield. I’d hang out my bug zapper, except that there are two potential problems. First, the sheer numbers of these critters would pose a fire hazard and second, there’s a high risk of zapping our geckos. We can’t afford that... they keep the moths down. But they won’t eat these bugs... I suppose it would be like eating marbles.

What bugs are we battling? you might ask. I’ll tell you. June bugs... and it’s only March. No... it’s not the result of global warming... it’s the result of first spring here in Texas. Yep, we have two... one in March and one in September. The good news... June bugs don’t come out in second spring. We get other stuff then. In March I sort of wish I had some of those nukes the Troopers use, but my neighbors might object. Of course it’s my neighbors who are to blame for the annual attacks of the nasty little critters. They don’t use bug-a-cide on their lawns. I do. It’s why I don’t have fairy rings in my lawn from the grubs eating away the grass roots. I don’t need a grass roots movement like that.

We got a respite today. Thunderstorms last night and cool temperatures today. The lightning was coming fast and hard from about midnight to three a.m. this morning. I’m pretty sure some bolts hit the ground... we lost power for about two hours. I was up. I couldn’t sleep with the bedroom being lit up like it was the fourth of July. I’m kind of hoping that some of that traveled underground and zapped the grubs. It would keep them from turning into adult bugs and save on my footwear.

There is a bit of good news, however. I don’t have to clean up all the bodies of my defeated foes. The local sparrow and grackle population thinks I’ve opened a free breakfast bar. It’s kind of a “you beat ‘em, we’ll eat ‘em arrangement. They hit the buffet first thing in the morning and by the time I’ve finished breakfast, all that is left are the beetles’ hard wing covers... and not all that many of them. A quick brooming and all is well.

Just watched the weather... more rain. Woohoo! But I know it’s not a truce... it’s just a lull in the battle. It’ll be a couple of weeks before they know they have been completely defeated... for this year at least. Well, that’s the news from the front in Texas. Y’all come back now, heah?