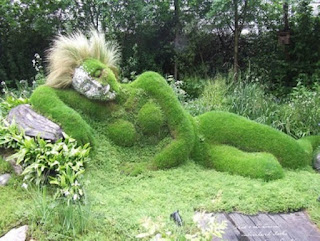 My back yard has grass deep enough to hide a small lion. Okay, maybe that’s an exaggeration, but it would hide a large house cat. Yep... it’s still raining in South-central Texas. You see, I didn’t get to mow the back on Friday. Got the front once it dried out from the previous night’s rain, but when I got done it was too late to mow the back. Saturday... forget about it. It rained Friday night and again Saturday afternoon. Then it rained Sunday... and again on Monday. Now it’s Tuesday and, you guessed it, more rain. Tomorrow... more rain. Thursday... more of the same. Friday... you got it. Things in Texas are flooding. Heck, even my dry creek bed out back had rapids in it. If it keeps up, I won’t have to go far to go fishing.

Rain, however, does not stop some people from mowing their lawns. And by “some people” I mean Bingo Bob. “Nothing,” he claims, “will stop” that behemoth of a riding mower he has. I’ve even seen him run it when there are areas on his lawn with an inch of water on them. Old Bob just fires his monster grass saw up and charges forth. Yep, he was out there this morning. The sprinkles preceding the deluge didn’t bother him. He’s got an umbrella mounted over the cockpit of that chunk of green-eating mammoth. I saw Paula Pettingzoo approaching Bob’s property just as he made a turn and headed back toward the sidewalk. I didn’t even have time to yell a warning, not that it would have done any good. All that water Bob has been mowing this year has rotted his muffler.

Bob, naturally, wasn’t paying any attention to anything outside of his aiming point. He didn’t see Paula, not that he would have stopped even if he had. One thing you have to understand about Bob’s mower. It has a side discharge that kind of works like a snow blower. It spews clippings out at an alarming velocity. It’s like a vegetative blizzard when he goes by. Paula saw Bob and tried to increase her pace, but that fiberglass boot she had on was slowing her down. I’m guessing she won’t be messing again with stray Chihuahuas that don’t want to be rescued any time soon.

Now, ordinarily, a person can just turn away and avoid any serious damage from Bob’s flying Bermuda, but that doesn’t work when the grass is wet. Wet, heck, it was downright sloppy. That old mower was spraying out green puke. It caught Paula full on as he roared by. I reckon he heard that shrill shriek she let out. Nuts, the whole neighborhood heard it. It was louder than Bob’s mower. Bob shoved in the clutch, brought the machine to a stop and then switched it off before turning to look back at what he’d just done.

Paula looked like that monster Grass Man they keep talking about in Ohio... except the curves were wrong. Nobody would mistake Paula for a man. Never-the-less, poor old Paula had been knocked down by the blast and was completely covered in about 4 inches of dripping wet grass. There wasn’t a single part of her that wasn’t... except her eyes, and they were blazing. I mean it... they were seriously blazing. I don’t think I’ve ever seen brown eyes that looked like fire and hers did. I think if I had been Bob, I’d have fired up that old mower and ridden it as far and as fast out of her path as I could. But then I’m not Bob and Bob sure as heck isn’t me. I’ve got common sense and I’ve seen what irate females are capable of!

Paula picked herself off the sidewalk and stalked angrily toward Bob. I’d say she rushed him, but... well, that walking cast thing. Spitting bits of grass, Paula blasted, “Oh no! You did NOT just do that!”

Bob thought he’d turn the attack aside with a little humor. “Well, yeah, I kinda did.”

Paula was not amused. Matter of fact, that just kind of stoked her fire. I’ve never heard Paula swear like that. Come to think of it, I don’t think I’ve ever heard what was coming out of her mouth from any other woman I know. It was enough to make sailors blush. Heck, it made me blush and, frankly, I have a pretty broad vocabulary.

Bob blanched and managed to babble, “Sorry... I really didn’t mean to do that.”

“Sure you didn’t, you !@#$%^ a$$wipe!” Paula rejoined, trying to brush the tufts of turf off her body without much success. The stuff was like glue. What she managed to get off one spot simply stuck to another. She started to let go another string of venom dripping invective, but suddenly let out another shriek. “Hives... I’m getting hives!”

I just looked at Bob as Paula faded in the distance. He shrugged a little, palms held outward, grinned just a little more evilly than I thought was appropriate, and turned the key on his monster mower.
Posted by S. Bradley Stoner at 4:42 PM