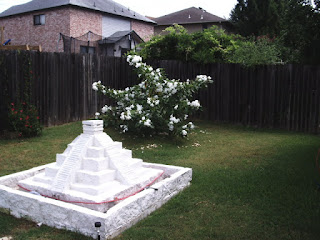 Springtime. Ah, the wonder of it. Everything is in bloom. The old neighborhood is busting out in color. Reds, yellows, purples, pinks, whites, and peaches (that would be my Peace Roses... don’t think anybody else in the neighborhood has them). Yep, it’s like one huge botanical garden. It’s the rain this year. Gallons and gallons of rain breeds acres upon acres of flowers... cultivated and otherwise. Heck, even the otherwise flowers are grand down here in Texas. Fields of Bluebells, Gaillardia, Paintbrush, and Milkweed (down here we call ‘em Butterfly Bushes). Of course, with all those native plants and the plethora of exotics that grace our flower beds, there’s a downside. Pollen. Tons and tons of it. If you have allergies and don’t like the itchiness, scratchiness, stuffiness, drainage and coughing that usually accompanies this affliction, there are a couple of times of the year you don’t want to visit us. Late winter and springtime.

Late winter (January through early March) is cedar season. If you haven’t experienced it, I recommend you avoid it. We have a little thing down here called Cedar Fever and it’s nasty for the chronically allergic. Eyes water, noses turn red, faces swell, and a hacking cough pervades the air. Most Allergy medicines really don’t touch it, especially those expensive ones. All they do is add to the coffers of the pharmaceutical companies. There is one that will knock it down, but it’s only sold at local HEB stores and it’s a generic. I’m not tellin’ you what it is. For that you have to come visit me. But I can tell you that my wife’s coworkers now refer to it as “the magic pill.”

Spring. Well, let’s see. There's oak... that will do a good job of turning your vehicle yellow no matter what the original color is. Ash, not quite as bad. Pecan, we all tolerate that because... well, pecan pie, pralines and such, for pity's sake. And of course all the garden plants, but they’re not too bad from an allergy standpoint, but they do attract bees and wasps. We have plenty of both. I’ve seen at least six species of wasps in our yard and bees... well, we have both the domestic honey and the Africanized (the so-called killer bees), and guess what? It’s swarming season. Yep, bees are looking to expand their territory and numbers. Now, given the overall decline in honeybee numbers, that’s a good thing. We need ‘em. Besides... they make honey, and who doesn’t like that?

Bingo Bob, Duncan Donutz, and Charlie were gathered on the corner, engaged in heated discussion. Much to my dismay, my curiosity got the better of me. They were loud, but the wind snatched away the words. I figured politics... but no! They were arguing about bees. Bees, for crying out loud. Seems a new swarm had formed on one of Bob’s trees, obviously looking for a place to locate. Bob and Duncan were hell bent on getting rid of them. Charlie was more in a preservationist mood.

“You can’t go around killing every little thing that  annoys you,” he protested. “They got a right to live. Besides, with all the collapsed colony stuff going around, we need ‘em. They pollinate stuff.”

“I’ll allow that,” Duncan conceded. “I wouldn’t get many tomatoes if they weren’t around, but these look like those damn killer bees... and Bob already got stung once.”

“Bob got stung? Must be global swarming," I grinned.

Duncan whirled around. “Hey, when did you get here?”

“Yeah... but I smacked him and squashed him flat. It was one of them killer bees.”

“They must’ve known I meant business.”

“Uh huh... so how did you determine it was a killer bee.”

“Hmmm... actually, that’s not true. Pretty much they look the same, only the Africanized bees are just a smidgen smaller, not that you’d notice.” I said. “Besides, if that had been a killer bee, all his buddies would have joined him and you’d have been lucky to get to the house without being stung dozens of times.”

“On the other hand,” Duncan smiled mischievously, “you probably wouldn’t know one if it flew up and kissed you on the lips.”

“Now you’re just being obnoxious, Duncan,” Bob spat, “you guys are always ganging up on me. Besides... what makes either one of you an expert on bees.”

“Well, I’m not claiming to be an expert, but I am a biologist and I’ve got a lot of field experience. Besides, entomology was one of my favorite courses in college and I’ve kept up.”

“Who cares if you studied animals’ insides... what’s that got to do with bees?”

“Geez, Bob, are you a complete dunce?” Duncan asked. “Even I know entomology means bug study.”

I just shook my head, but Charlie, apparently feeling crowded out of the discussion, interjected, “He isn’t a dunce... he’s just ignorant is all. We have an opportunity to educate him now.” Charlie was warming to the “educate him” thing, being a retired teacher.

Bob didn’t give him a chance. “Yeah... like you teachers do such a great job... my kids can’t even write cursive, for crying out loud.”

I could tell, this conversation was about to leave the subject of bees... and not in a good way. “Well, time for me to head back home.”

“I have a secret weapon,” I replied. “Turns ‘em into teddy bees.”

“Yeah, and what would that be?”

“You’ve all seen it,” I replied. “My morning glory bush.”

“Last time I saw that,” Duncan offered, “the thing was covered with bees and wasps.”

“True,” I said, “but did any of them come after you? Did they act in the least aggressive?”

Duncan rubbed his chin. “Come to think of it, no... no they didn’t and we were really close.”

“Yep, and a bunch of those bees were Africanized. That bush just kind of mellows them out. Frankly, I think they get stoned on the pollen.”

“Really?” the three of them chorused.

“Yep... and I’ve started a couple of more of them from cuttings that are about ready to transplant... I could make you a deal on cost.”

“Ha!” Bob shouted. “I knew there was a catch somewhere! That’s low, bro... trying to use misery to sell stuff.”

I didn’t bother with a response. Heck, I’m not going to give them away. I’ve got pots, dirt, and time.. about six months’ worth... invested. That’s got to be worth the five bucks I want for them. But if Bob would rather brave the wrath of the killer bee... not my problem.
Posted by S. Bradley Stoner at 11:49 AM