The Square Peg - Say What?! 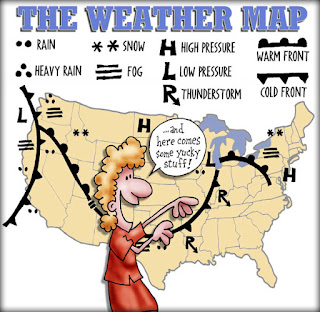 Sunday, 0900 hours. Up and wide awake. Okay, I slept in. Sue me. Poured a cup of coffee and a bowl of cereal. Not the best breakfast, but it works on Sunday. Don’t need all that much energy to run a keyboard. Turn on TV. New is all politics and Iowa. Don’t give a damn about politics and less about Iowa. Texas always has the option of becoming its own country. Turn on weather. Is it going to be nice or naughty today?

A little blond twenty-something is dancing across the screen. Has a little black and white number on that she thinks makes her butt look smaller. Is pointing at a map she can't see. Talking excitedly. Asks her immaculately dressed cohost... (Mr. GQ?)... a question. About “Winter Storm Kayla.”

Say what?! I almost swallow my spoon. When did they start naming winter storms over land? More importantly... WHY??! It’s a freaking low-pressure system. Quite common in the winters of my lifetime.

“But, oooh...,” cute blond continues, “heavy rains in California... Might cause mud slides... especially in areas that burned.”

Explains that Winter Storm Kayla will move east into the Four Corners area and turns further details over to cohost.

Suave Mr. GQ adds, “Denver can expect up to a foot of snow. Not common for February.”

Um, I’m sorry, but WHAT THE HE DOUBLE HOCKEY STICKS did you just say? I lived in Denver and southwest of Denver for 23 years and then in Montana for another 25... late January through March is when they get most of their snow.

Well, duh, this is the beginning of tornado season in the south. It moves north as the year progresses. So this is a surprise how?

Cute blond, again pointing at her imaginary map that only viewers can see, notes that this, indeed, is the case. Clearly she is excited... churning excitement and possible dread for all those twenty somethings living in the south and southeast. Be sure you know what county you live in or are traveling through...

Are you freaking kidding me?? Twenty-somethings don’t even know there friends’ and coworkers’ last names... and you want them to know what county they’re in? Trust me... I know this because my youngest is a twenty-something. He doesn’t know the last names of friends he’s known since the eighth grade.

Here’s a clue, youngsters... not everything is a catastrophe. Not everything is a disaster. Some of this stuff has been going on since before man. Weather is weather. Putting a name on it doesn’t make it worse than it has always been... or better. It’s bullsh*t. It’s ratings. Nobody is watching the weather channel anymore... they’ve got an app for that. Pretty soon cute and suave are going to be voices on your smart phone... oh, and don’t believe everything you hear. Have a nice freaking day.
Posted by S. Bradley Stoner at 8:58 AM