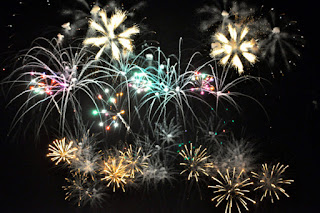 Well, after the Duck Drop a few years back, I didn’t think any homemade celebration could come close to a community sponsored one. Turns out, I was wrong. I underestimated the resolve of a transplanted New Jerseyite (and yes, that’s correct… I Googled it) to outdo the natives of his adopted state. Understand that Texans go big on New Year’s, 4th of July, Veteran’s Day, Oktoberfest, Halloween, and Christmas. Since we particularly like things that go bang, New Year’s and the 4th of July figure quite prominently in the bang department. Matter of fact, on the ten point scale of the global bangometer, it registers somewhere around 15. Yep… off the scale.

Fireworks are big business in Texas even though most incorporated cities ban their use inside the city limits, San Antonio included. Killjoys. Not that such bans in the least affect fireworks sales or their use by unauthorized entities (i.e., your average homeowner). I think the attitude is, “they can’t throw us all in jail.” Not that there’s a whole lot of effort employed by the local constabulary. They’re more focused on real issues, like keeping inebriated citizens out of cars and on the road. And we all thank them for that. Nobody wants to spend the New Year dead.

True to form, Bingo Bob set about his preparations for New Year’s early. Daily trips to the Alamo Fireworks stand just north of the city limits were begun after work the entire week after Christmas. Now, we couldn’t be sure, but watching him daily, we estimated the cache of explosive devices to be nearing a ton before the big day came. If somebody had dropped a match in Bob’s garage, they would have made a new era contribution to the space age by putting ol’ Bob on the moon. Luckily for Bob, and the moon, no premature ignition occurred.

As twilight fell on New Year’s eve, you could see the neighbors hauling lawn chairs out of the garage and you could smell the popcorn. Somebody brought out a grill and started cooking hot dogs. You could feel the creeping excitement. I’d like to say the show started with a bang, but it actually started with sparklers and pop bottle rockets. An impatient neighbor down the street hauled out his Roman candles and he and his brother-in-law commenced to shooting flaming balls at one another. Mothers shooed their children inside, but let them back out when the two ran out of fireworks. One of the more “progressive” set of parents allowed their little darlings to pull the tabs on “poppers,” those sad non-explosive excuses for noisemakers. More adventurous families explored the wonders of Snakes, Smoke Bombs, and Black Cats. Exciting stuff.

Bob kept us amused with an array of Fountains, wheels, chasers, cracklers, and such, but was obviously saving the heavy artillery for the final countdown. Most of the older folks and those with very young children had given up and headed inside before Bob started arranging the mortars, repeaters, and sky rockets on his driveway. People started coming back outside… even the ones with little kids. You could hear the buzz of excitement. It was kind of like finding out about a kegger when you were in high school… you knew it wasn’t legal, but you couldn’t stay away.

Somebody turned up a TV really loud as the announcer shouted, “Ten… nine…” About that time, Bob set off the first mortar shell, it’s launch announced by the hollow thwunk, followed by a thunderous blast and a shower of crackling sparks as the star shell burst overhead. By the time the count hit zero, shells were being launched every few seconds. Dense clouds of burnt powder began to drift across the roofs. Sparks dribbled down, causing some nervous Nellies to unlimber their garden hoses, but none actually reached even the highest roof. This went on for several minutes until the repeaters kicked in, spewing shells out rapid fire. Now I’m not going to say it matched the big commercial shows, but it came pretty darn close. Yep, ol’ Bob did a bang up job. Heck, we didn’t even mind helping to clean up the chaff from the street and contribute garbage can space for the spent mortar tubes the next day.

Bob sort of stared at me blankly and motioned toward his ear with his free hand. “What?”

For a minute I had forgotten how close he was to all those booms, so I just gave him a thumbs up.

Bob nodded, grinned and yelled, “Just wait ‘til the fourth.”

I’m thinking about taking a trip out west that week. I don’t think I can take that much fun all in one year.
Posted by S. Bradley Stoner at 6:30 AM